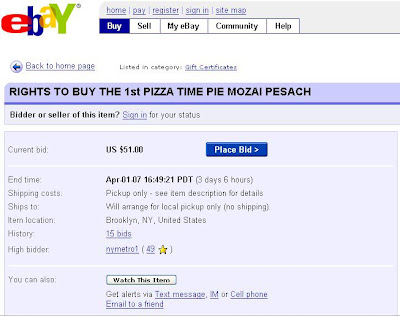 YOU ARE BIDDING ON THE RIGHT TO PURCHASE THE FIRST FRESHLY BAKED PIZZA PIE FROM THE WORLD FAMOUS KOSHER PIZZA STORE "PIZZA TIME" ON AVE J IN BROOKLYN, NY

UPDATE! THE TZEDAKA IY''H WILL BE GIVEN TO THE SEPHARDIC BIKUR CHOLIM

THE CHECKS COULD BE MADE DIRECTLY TO THE ORGANIZATION

THE BID INCLUDES THE PRICE OF THE 1ST PIE!!

best pizza in the neighborhood!

oh, and remember... Ashkenazim are also welcome to participate in Sephardic Bikur Holim :-)

What a fantastic idea, and for tzedakah also!

eh!
If he had neighbors like mine celebrating Maimona...

I usually get the first Cap'n Crunch sold at Stop and Shop, though I'm unclear if there's a charity event associated with that.
Chag Kasher vesameach to the entire Muqata clan from the Teaneck Stiefels
Larry (The MofB)

i can't seem to find the posting on ebay and i've tried a few forms...can any1 enlighten me as to how to go about finding the listing?!