Driving to work last week, I noticed the following eatery in the village of Hawara (known primarily for violent rock throwing attacks against Israeli vehicles). 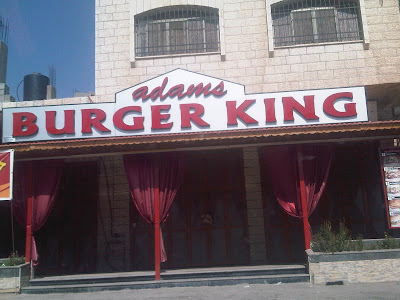 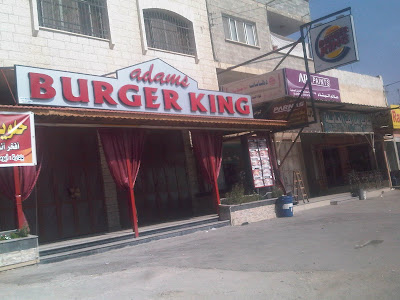 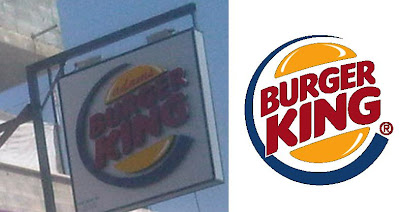 Wondering if Adam's restaurant was part of the Global Burger King franchise, I wrote to Burger King for comment.

While driving to work last week, I drove through the West Bank Palestinian town of Hawara, and noticed the "Adam's Burger King" eatery on the main road (highway 60).

I assume its a legally franchised operation because they use the Burger King trademarked logo, with the word "Adam's" in the top yellow bun. (See enclosed)

What franchise opportunities exist for opening an additional Burger King in the Palestinian territories?

I would like to open "Jameel's Burger King" in Ramallah, across the street from the Muqata government compound, with the same type of logo ("Jameel's" in the top yellow bun), or perhaps "The Muqata Burger King." Both of these would be very popular names for the restaurant, and I'm sure people would enjoy eating at a quality Burger King restaurant in Ramallah.

Is this a possibility?

I'll let you know what reply I get from Burger King...opening Jameel's Burger King or The Muqata Burger King sounds like a great opportunity, and we could even sell waffles as well.

jameel, there are times when yr awesome is just bustin' at the seams and i have to tell u about it. :)

'Adam' ripped off the sign (or just pulled it out of a Dumpster)from one of the legit BK's when the Israeli Franchise owner dropped it (no more 'real' BK's in Israel, as you may know).

Jonathan is so right !!
But does this mean you really have given up on waffles?

Don't give up the waffles. Simply open a Jameel's IHOP in Ramallah.

Does that mean his hechsher is also suspect?

Anonymous: Are you saying that "Adam" is illegally using the Burger King [tm] trademarked name and logo?!

That would mean Jameel's letter to Burger King could get this guy shut down and sued for trademark and copyright infringement.

That wouldn't be right, would it?

I have a bit of a grudge against BK, since they flipped out about a gentleman in my area who advertised himself as "The Felafel Burger King".

He is now "The Felafel King", but his felafel burgers are as good as ever.

You know, I wondered the same thing. Kudos to you for writing to them....

"Hi Steve. You're the new graduate trainee, right? Welcome to the Burger King family! You'll be working in the International Franchise Division for a few weeks, to get a feel for our operations. I heard you were keen on international travel. So we have a perfect little assignment for you...!"

I was planning on dropping in right after the nine days. Apparently, they don't have a teuda because they're open on Fridays.