Continuing from part I of the Muqata Chanuka Tiyul to Har Eval. 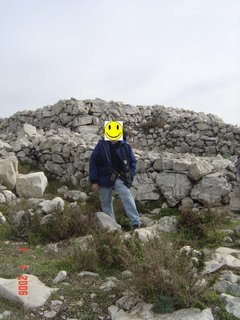 Jameel in front of the mizbeach on Har Eval.

Despite the well-intentioned comments concerning my children's welfare, and whether taking children on tiyulim in Israel is a good thing or not, I will not discuss that in this posting.

For some preliminary background on Har Eval, I blogged about it 2 weeks ago, when announcing the Muqata Family Tiyul over Chanuka. However, for the ultimate explanation of what we saw on Har Eval, the following was written by Adam Zertal, the archeologist who found the site.

Har Eval is the highest point in the Shomron hills, standing at over 940 meters above sea level; we were able to see Har Tavor pretty clearly. On a clear day, you can easily see Har Hermon in the north-western edge of the Golan Heights. Since its so high up, its also a major IDF intelligence installation, and can hear every conversation going on in Shechem, far down below in the valley. 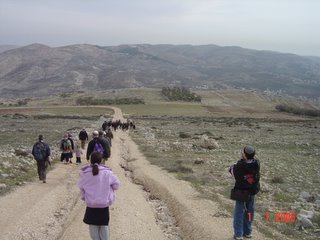 The dirt road from the top of Har Eval isn't meant for bulletproof buses, so we walked down by foot. 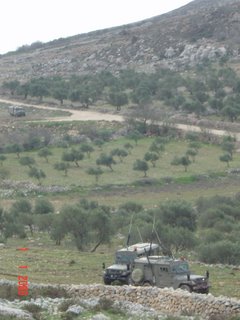 The IDF provided excellent security for us. Besides the jeeps that accompanied our buses on the Har Eval access road, soldiers and jeeps joined our 30 minutes walk to the mizbeach. 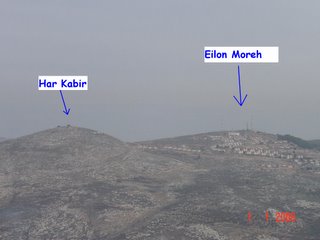 On one side of the mizbeach is a huge expanse of Har Eval, where you could easily imagine 6 of the tribes. The Har Grizim mountain was a bit more tricky to figure out. If you assume this is definitely the mizbeach built by Yehoshua, then it would make more sense for Har Kabir to be the real Har Grizim -- since it easily faces the mizbeach opposite Har Eval, and not the one which is the mesora of the Shomronim. 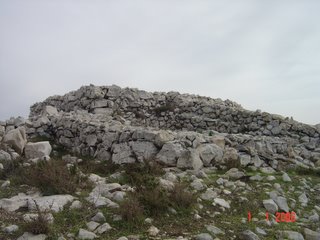 When the mizbeach was found in the early 1980s, the above Egyptian-style scarab was found near the mizbeach. This scarab is very rare; only five known parallels exist: one from Egypt, three from Israel and one from Cyprus. What is this doing here in the first place?

Imagine for a second that Yehoshua is building the mizbeach, one of the Jews has this in his possession, which was given to him by his father while the Jews wandered in the desert for 40 years. He took it from Egypt during the great Yetziat Mitzrayim as a souvenir...and now it ends up in Israel 40 years later. 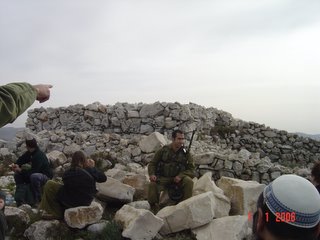 The IDF seemed happy to be accompanying us on the tiyul, as it was a break from what they usually have to do in the area, which is alot less fun. 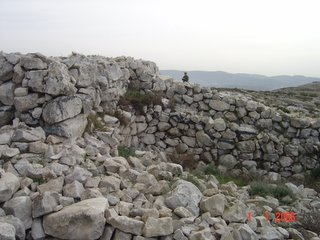 There are 2 levels to the mizbeach; the top level, and a lower level which rings around the mizbeach. Each level has its own ramp; and this is one of the halachik specifics of how a mizbeach is built. Rav Yoel bin Nun wrote an excellent book about the halachik aspects of this particular mizbeach. 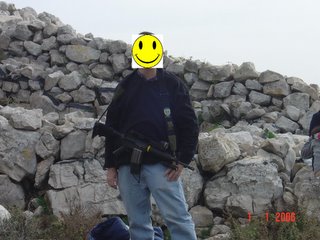 Jameel in front of the ramps. 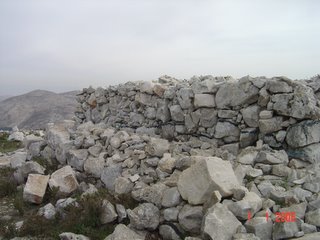 The 2 levels of the mizbeach are clearly seen here.

Now, you may read this and think, why are you getting excited over a bunch of rocks.

My daughter excitedly told me, "These are possibly the exact same rocks which were touched by Yehoshua! If he built this mizbeach, then he was walking right here, at this exact spot where I'm standing now...Bnei Yisrael were right there shouting out the brachot and the klalot...wow."

My children were able to connect to Judaism and the Tanach in such a realistic way that it become alive for them...the words of the Tanach jumped out at them, touched them; the mishnayot of the laws of the mizbeach are being seen in front of their eyes...and that is one of the most fulfilling experiences I can have as a Jewish parent. Living in Israel and experiencing the Tanach on a daily basis is one of the best choices I've made in my life.

Walking back up the hill was pretty rough going, and I asked the soldiers for a jeep to help an older gentleman to get up the hill. I told them I was a medic, and it would be very helpful to the person to go up in the jeep. Within 60 seconds, a jeep arrived, and my kids jumped aboard as well. (After all, whats more fun than riding in an army jeep). I ran up most of the hill after the jeep for the exercise.

Going back on the bus, my kids told me this was one of their best tiyulim of all time.

I'll put any amount of money down that for my next idea, they will still kvetch and mope...till we're in the middle of it.

PS: Sorry for the delay in getting this posted - blogger was having some serious picture posting issues, and I had to find some workarounds. Feel free to email with questions, comments, and requests for more pictures.

Thats one of the really cool things about living here in israel. We get to travel to all these places where our ancestors stepped during times of the tanach.

Every step in this country is where history has been made.

I first came to Israel on a summer tour with Achva and was amazed about how much history there was in most of the places we visited or hiked.

Too bad I dont have the time to return to most of those places, but hopefully one day when my kids are older, I'll not only find the time, I'll make the time.

Jameel -- glad to hear you enjoyed the tiyul. Somehow, you never look that happy whenever I've seen you... should I take it personally?

very cool. The connection makes it more real, it amazes me too

J-cop: Find the time. I try to take vacation days when my kids have tiyulim as well, so I can be a milaveh neshek with them.

Mike: I wonder if people would see me like that -- would take me more seriously than they do now?

Rolling Hills: When you see the "click" it gives you a VERY cool feeling inside. Almost a high.

Thanks for the recap and the pictures. I could imagine that I was there ... and loving it like one of your kids.

Your beautiful feelings are felt right through your post.Sorry I couldn't join.

Definite request for more pictures. These are fantastic! I was always in awe of walking the same land as those in the Tanach while in Israel. Incredible to think on. Glad your kids had a good time in the end.

I think I have a t-shirt with your picture on it...

Oh my gosh, that is SO exciting! I love ruins and archaelogical digs, so now you've made me completely envious. Ahem. But that scarab is really cool. (Any relation to my scarab/dung beetle, LOL?)

LabRab: Thanks - let us know when you're here and I'll drag you along on a tiyul as well ;-)

Daat Y: I'm honestly shocked the IDF permitted the tiyul...there hasn't been a civilian tiyul to Har Eval in 5 years. Glad we could go when we had the chance.
Hopefully, there will be many more.

MCA: I'll see what pix need to be photoshopped. Many people recognize me all over the place, so I'm not surprised about your t-shirt :) (Someone, a Filipino, even recognized me in Manila...that was VERY strange)

Irina: What's a scarab anyway? A medallion? There are digs all the time here...what are you waiting for?

A scarab is a dung beetle! In Egypt, it was considered holy.

Unfortunately, I'm tied up with school, so I won't be able to go till after graduation (in May). But I'm really looking forward to it!

I was actually going to go, My excitment for the trip dates back to when i read the sefer "ish yemini" Sunday however was spent giving out chanuka toys to the kids in nitzan. My friends flew to israel with 4 HUGE suitcases of toys... incidently they forgot to bring many clothes so they "commanderd" most of mine. Then sunday night i had a wedding in machpela...oh jameel where were u when they handed out tzav girush in chevron... that was like deja vu..

These are fantastic! I was always in awe of walking the same land as those in the Tanach while in Israel. Incredible to think on. Glad your kids had a good time in the end.