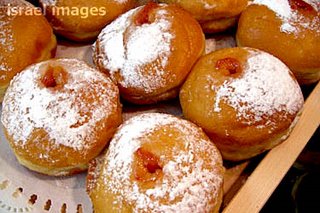 If there's anything that will make me sick to my stomach; it's sufganiyot. Some call them jelly donuts, I just call them mega-calorie temptations. Want to gain weight? Just stare at 'em. Taste one...and you're done for...self control goes out the window..till you're slightly bloated, and wondering if they were really worth it.

A five percent drop in the sale of sufganiyot (traditional holiday pastry) is expected this Hanukkah in comparison with last year’s figures.

According to Manufacturers’ Association of Israel (MAI) estimates, some 18 million sufganiyot will be sold ahead of and during Hanukkah for a total of NIS 50 million (USD 12 million).

The average Israeli will consume 3-4 sufganiyot two months prior to and during the holiday. Sufganiya prices range from NIS 2.5 – 8 (59 cents – USD 1.90); according to doughnut manufacturers, the prices of sufganiyot have not increased this year despite a 15 percent rise in flour and energy prices.

Some 5 million of the sufganiyot expected to be sold during the holiday will be mini-doughnuts, as opposed to the 3 million mini-sufganiyot sold in Hanukkah 2005.

According to the MAI, some 36 million candles will be sold this Hanukkah holiday, marking a 5 percent increase from last year’s sales. Total candle sales are expected to reach NIS 4 million (USD 960,000).

MAI officials mentioned that this Hanukkah 2 million dollars worth of candles will be exported, mainly to Jewish communities in the United States, France, Australia, Canada and the UK.

Well, with that out of the way, you can now enjoy the following Chanuka flash animation. Didn't get many this year...no singing candles...nothing. 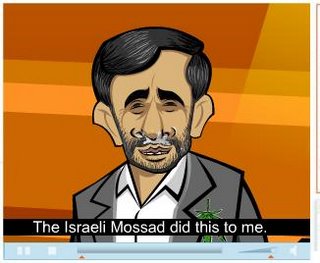 I just can't agree with you about the sufganiyot, Jameel. After growing up on potato latkes, they are such a wonderful change. I'll take this modern tradition any day.

I don't like them either. I like the fillings, but that's never a reason to eat deep-fried sugar coated dough!

you guys have obviously never tasted the good old english doughnuts... you cant beat those or say no to them!

Have a great chanuka!

nothing wrong with a mega-calorie temptation on the odd occasion! i can't dislike donuts with such a vengeance as you jameel.

a once a year treat of deep-fried, sugar-coated, jam-filled dough is ok. it's a tradition for the chag! it's the self control thing that's the problem!

i did learn my lesson a couple of years back when my brother brought back from overseas, several boxes of krispy kreme. while, we do have donuts here, nothing like that. as you can imagine, for a long while after that i couldn't look a donut in the face without feeling rather nauseous.

now i'm quite recovered and back to enjoying my once a year chanukah treat. we'll see how long the self control can last... there's still five more days of chanukah!

hope you're having a great time!!

Best donuts ever here in England - yum yum yum!
i'll have one donut a year..lol..murder to stop though!
this year - the bakery advertised 10 different types of donuts with 8 fillings and 15 different flavors...
I was trying to figure out how many donuts one would have to eat to taste all the combos!
Happy Chanukah!
(Malteser filled donuts? lol)

Has anyone had any Chanukah foods that aren't latkes or sufganiot?

I know there are other fried foods that are traditional for Jews from other regions. Cheese is also traditional, but I only know about cheese latkes (though those differ enough from potato and other vegetable latkes to be worth mentioning) and not other forms.

Some also prepare a goose for Chanukah, right? And use the schmaltz from same in the latkes. I've even heard of making special kitchen preparations so as to render the Chanukah goose schmaltz kosher l'Pesach and save it for Pesach, but that may have been in the shtetls when kashering for Pesach was simpler and animals were only available during their natural seasons.

Lucky me has no Yetzer Harah towards Ponchkes(as sufganyot are called around here).
Who would've thought seasonal pastries were such a multi million business?

this is what you went to eilat for? to get a picture of sufganiyot for me? i hope you will have some better pictures to share with us.

Sniff...Why do you hate me? I am just a simple jewish donut trying to bring joy and jelly to your life.

Why do you push me away? Is it my shape? my delicately powdered sugar? Can't you just accept me as I am and not try to change me?!

Hate has never solved any of the world's problems; the same cannot be said of us, Jelly donuts. In fact, we were invented at the end of the Hundred Years' War and are largely credited for the cease fire.

Please, have a heart; eat a Jelly donut today. You will be happier for it.

Sad to say, I don't like sufganiyot, they aren't an issue for me. Latkes, on the other hand, are quite another story.

I have a special fondness for sufganiyot because I couldn't get them where I lived--making them ourselves certainly tasted better but it was a LOT of work. And HERE you can buy them with multiple fillings!! Still like latkes but these are both once-a-year-fat-ingestions. One or two during the holiday is plenty.

I'm not such a fan of sufganiot either- I'm a pate foi gras girl meself!!!

Enjoy Eilat while we freeze!!!!

Nothing quite like standing in the bitter cold outside a trainstation in Holland... bag full of fresh hot oliebollen (light poofy sweet fried dough balls), happily munching, snoot covered in powdered sugar.....

Latkes I did not know about till returning to the US. I make darn good latkes.

when did the bet hamikdash join ur signature? i like it. can't wait to light the menorah there this chanukah.

Anonymous: In regard to other Chanukkah food, honey cakes are also good if baked properly. (Shouldn't be too heavy, and should have a moderate amount of honey).

donut purveyor: get your hot sufganiyot here! jelly or custard filled, get your sufganiyot here!
jameel: BAH HUMBUG!
ghost of chanukah past: come with me, jameel.
jameel: where are we going?
ghost of chanukah past: i'm taking you to a time where there was hardly enough oil for one night of frying sufganiyot, but then hashem caused a great miracle to happen here and all of a sudden there was enough oil to fry sufganiyot for EIGHT nights!
jameel: bah humbug.
ghost of chanukah future: jameel, you must come with me....
jameel: where are we going?
ghost of chanukah future: you need to see what you're doing....
jameel: what am i doing?
ghost of chanukah future: you've reminded your readers just how calorie-laden sufganiyot are, and how after eating one, not only does one become bloated and resentful of having eaten one in the first place, but your readers have realized that they are the main cause of clogged arteries, oily skin, not finding a shidduch, divorce, drowning, not being able to fit through doorways or sit in airplane seats.
jameel: and your point would be....
ghost of chanukah future: you have influenced your readers to quit their sufganiyot habit. as a result, the jam makers, the flour millers, the wheat growers, the sugar powderers, the oil squeezers, the donut fryers are unable to earn a parnassa and they are all out of work. the economy suffers. the stock market is dropping. there is a run on banks. prohibition has been reinstated--all over the world....
jameel: NO!!!! YOU MUST STOP!!!!!!
donut purveyor: hey, you, are you okay?
jameel: yeah, i, uh, i....
donut purveyor: you what?
jameel: i, uh, i'll take 3 dozen sufganiyot please, half custard, half jelly.

ahhh, we can all rest easy once again.

You should try the rule - no matzas till the seder, no sufganiyot till chanukah and then only amzingly fresh ones - you might change your mind

My favorite sufganiyot ever are the rivat chalav-filled ones from Berman Bakery in Yerushalayim. They're sooooo yummy. :)

OH NO! Jelly doughnuts! I gained a pound just looking at the picture

The sufganiyot must have been bad - Jameel is gone lost