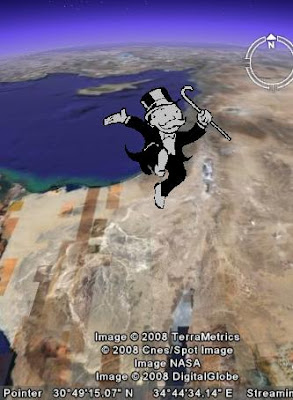 Seen here and here on Chiropractic Citizen At Large

Most of the civilized world has heard that Monopoly is constructing a Global game board, and their site (http://www.monopoly.com/) features a voting poll for various prominent and not-so-major cities around the world.

Happily, Jerusalem is one of the contenders and currently sits in fourth place, almost bringing it to Boardwalk status.

When I first entered the site, Jerusalem was listed as "Jerusalem, Israel," and I (as well as others I know) rejoiced in the fact that Israel was acknowledged as a country, and as the sovereign nation with Jerusalem as its capitol. Then today, when I logged on to continue voting and push Jerusalem (and New York City) up the charts, lo and behold, Jerusalem is now the only listed city out of 68 without a country. Like we are the Vatican or something, a floating island blessed by G-d in a sea of legitimate countries.

The removal of Israel as a country from the Monopoly site must have aroused an uproar, because one day later, none of the 68 cities on the finalist list are identified with their respective entities.

Hasbro joins the US State Department and the Vatican in refusing to accept Jerusalem as the capital of Israel.

Who cares what they think...we have our version of Monopoly in Hebrew, with Jerusalem (and who would have thought that the US dollar is almost considered "Monopoly money" while the Shekel keeps demolishing it week after week?