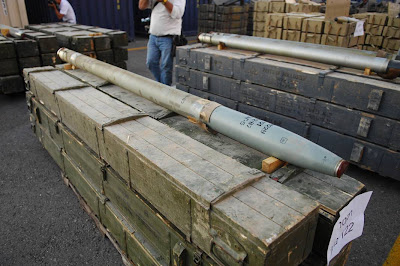 This evening at 9:30 PM, Lt. Col. Avital Leibovitch conducted a press conference for bloggers about today's IDF capture of an Iranian cargo ship, loaded with weapons on its way to Syria and Hezbollah.

IDF Spokesperson Lt. Co. Avital Leibovitch:
Late last night, IDF navy forces boarded an Iranian cargo ship. We asked the captain if we could check the containers of his ship and he agreed without a problem.

We checked the shipping containers and found they were filled with munitions, so we then directed the cargo vessel to accompany us to the port in Ashdod, Israel. The cargo vessel was intercepted by IDF naval forces about 100 nautical miles west of Israel

These munitions were packed in shipping containers, behind large bags of plastic polyethylene. In addition to the plastic material physically hiding the munitions, polyethylene prevents scanners from identifying munitions hidden behind them.

These munitions discovered so far were manufactured by China, Russia, and Spain, which goes against UN resolution 1747 - forbidding exports or commerce of weapons with Iran.

We saw on shipping documents that the vessel's port of origin is an Iranian port, and it's destination was Syria, for the weapons to get to Hezbollah.

Questions:
Jameel: Some of Israel's detractors claim that this was an act of piracy. What legal basis does the IDF in detaining this ship?

IDF Spox: This action was completely in accordance with international law. There is no legal problem to board and check the contents of a vessel in a country's surrounding area. No force was used whatsoever and the captain of the ship agreed to accompany IDF naval forces to the Ashdod port.
Question: Was this a routine mission or based on intelligence?
IDF Spox: This was a routine mission. The navy conducts checks like all the time.

IDF Spox: The amount of munitions seized is -- 10 times more than Karin A cargo boat which was illegally bringing munitions to the Palestinian Authority in Gaza in October 02. The Karin A has 50 tons of munitions aboard, while this boat last night had over 500 tons of munitions on board.
Question: Was this a 1 time success, or do ships like this transport weapons to Hezbollah all the time? Is this one boat captured out of five?
IDF Spox: We don't know how many other attempts or boats may have gotten through, but this is definitely part of a pattern to re-arm Hezbollah.
Question from David Abitbol/Jewlicious: What is the range of the rockets?
IDF Spox: More than 40 kilometers.
Question from David Abitbol/Jewlicious: While watching the video, some of the munitions looked brand new, while others looked a bit used. Why would Iran send anything less than brand new to Hezbollah?
IDF Spox: I was there today and saw all the munitions personally. They were all brand new. All of it, what has been opened so far.
Question from Prof. Richard Landes: What are the next moves for Israel in light of this success?
IDF Spox: That's more of a political question, one best addressed to Israel's government.

Thank you all for joining.
Good night. 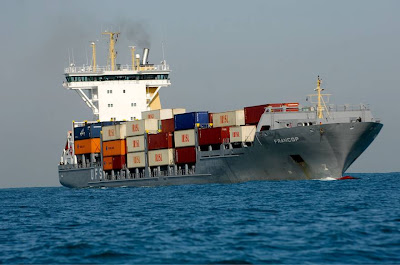 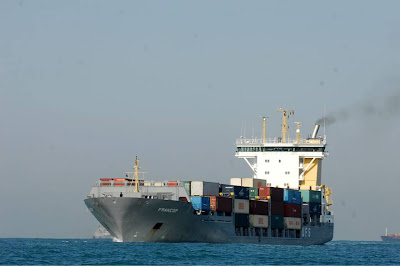 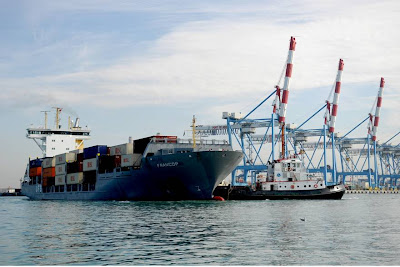 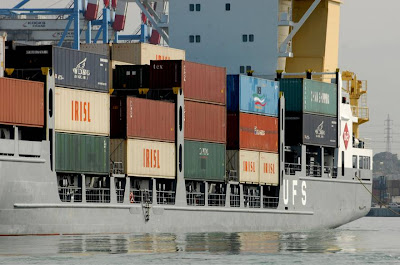 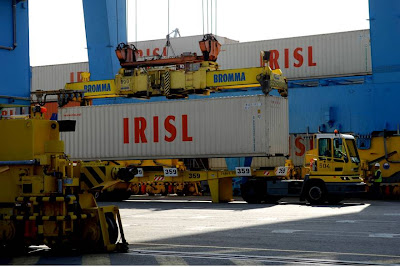 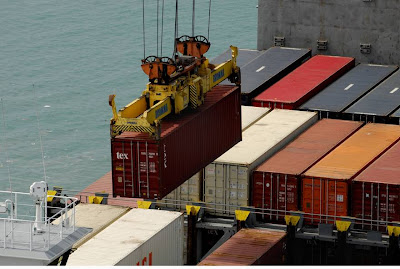 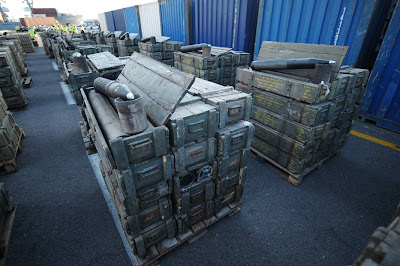 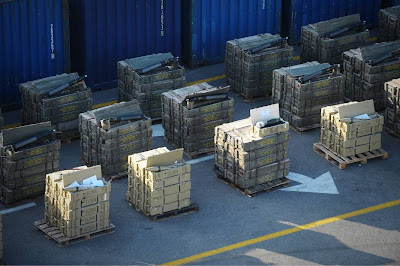 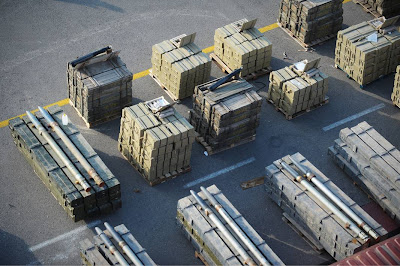 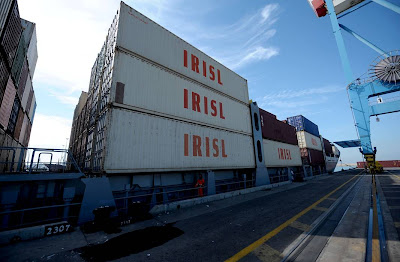 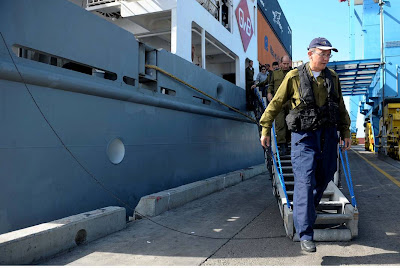 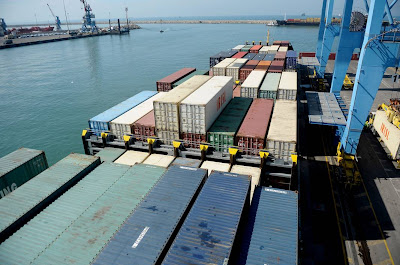 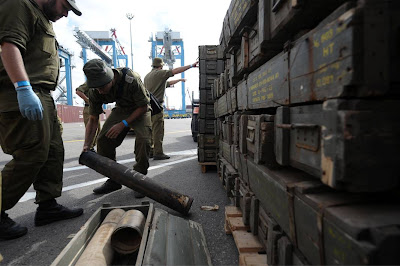 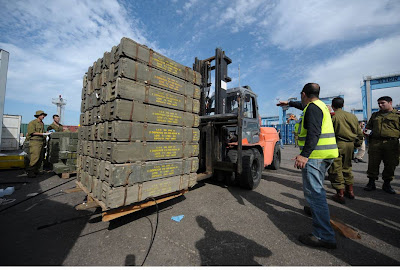 -"Decides that Iran shall not export any of the items in documents S/2006/814 and S/2006/815 and that all Member States shall prohibit the procurement of such items from Iran by their nationals, or using their flag vessels or aircraft, and whether or not originating in the territory of Iran."

UN Security Council Resolution 1474 (March 24th, 2007): Explicitly forbids all export of arms from Iran (not only to terrorist organizations), without relating to methods of enforcement.

"Decides that Iran shall not supply, sell or transfer directly or indirectly from its territory or by its nationals or using its flag vessels or aircraft any arms or related material, and that all States shall prohibit the procurement of such items from Iran by their nationals, or using their flag vessels or aircraft, and whether or not originating in the territory of Iran."

UN Security Council Resolution 1803 (March 24th, 2008): Calls for supervision over the movement of aircraft and naval vessels owned by the companies Iran Air and IRISL (Annexes 11 and 12)

"Calls upon all States, in accordance with their national legal authorities and legislation and consistent with international law, in particular the law of the sea and relevant international civil aviation agreements, to inspect the cargoes to and from Iran of aircraft and vessels, at their airports and seaports, owned or operated by Iran Air Cargo and Islamic Republic of Iran Shipping Lines, provided there are reasonable grounds to believe that the aircraft or vessel is transporting goods prohibited under this resolution or resolution 1737 (2006) or resolutions 1747 (2007);"

UN Security Council Resolution 1835 September 27th, 2008: Reconfirms earlier resolutions dealing with the issue of Iranian exports and arms trading, and calls on Iran to immediately fulfill its obligations as they appear in prior resolutions.

I can already predict what I will read on several European internet fora.

The argument that Israel has arms, why shouldn't the Lebanese / Hezbollies / Arabs / Pallies / Etc.

The assertion that Israel is a far worse terrorist than ANY of the Arabs.

Some wild-eyed theory that the US is trying to set the stage for another Middle-East war.

A demand that Israel withdraw from where-ever it is (writer unclear).

Outrage over terrorist Jew piracy why doesn't the UN do something oh those poor Lebanese just trying to defend themselves against brutal Israeli imperialist aggression and those arms wouldn't even give parity coz the damn Yanks keep giving bilyuns of dollars to Israel and their armed to the teeth with mines, poison gas, and death rays the humanity!

Now, I will admit that I am curious what the anonymous TelAvivan commenter from several posts ago will say about this. Will he parrot the Europeans? Or will he say something startlingly original.
I'm jes' dyin' to know.

How does one get alerted/in on such an IDF bloggers press conf?

That weapons quantity is UNBELIEVABLE!!! That's a small scale war on a single ship.

never heard of a "press conference for bloggers" but it seems like a good idea. you even got in the first (and best) question. well done!

I guess I'm not in the loop, or do I have the wrong address?

According to the news on Reshet Bet this morning (11:00 am), Defense Minister Ehud Barak and Chief of General Staff Lt.-Gen. Gabi Ashkenazi were both personally involved in the execution of this mission.

Perhaps the Defense Minister and the Chief of Staff also mop the floors in the Kiriya every night?

Back of the hill - why would I "parrot" such a ridiculous line? As a secular person, it makes sense that I would abhor a brutal theocracy like Iran and its terrorist proxies, Hizballah.

Believe it or not, there are many Lebanese who feel the same exact way - and I feel closer to their values than I do to certain Jews who would like to turn Israel into a Jewish version of Iran and declare "holy war" against homosexuals (like Baruch Marzel) or claim that suicide bombings are punishment from god for "immodesty" among Israeli women like Tzvi Fishman, a prominent blogger on arutz sheva claims.

You see - when I talk about defending Western civilization against those who would seek to force primitive, tribalist, and collectivist values down our throats I mean it, and my allies in that fight can be anyone who shares my values, whether they are Jewish, Arab, Yellow, or Purple. I don't use "defending Western civilization" as a code word for smearing people based on their race rather than the values they hold, while at the same time advocating identical values to the ones I fight but just giving them a "Jewish" face.

Back of the hill - why would I "parrot" such a ridiculous line? As a secular person, it makes sense that I would abhor a brutal theocracy like Iran and its terrorist proxies, Hizballah.
Believe it or not, there are many Lebanese who feel the same exact way
Not just Lebanese. I have met Pallies who frankly assert that they would rather see the entire Middle-East destroyed than the extremists winning. But please note that they are over here (in the US), and they only say such things in private. Cautious bunch.

and I feel closer to their values than I do to certain Jews who would like to turn Israel into a Jewish version of Iran and declare "holy war" against homosexuals (like Baruch Marzel) or claim that suicide bombings are punishment from god for "immodesty" among Israeli women like Tzvi Fishman, a prominent blogger on arutz sheva claims.

Ah yes. And Katrina was punishment for the Blacks in New Orleans not studying Torah enough. Assertions like that do infinitely more harm than any amount of actual rational behaviour by the other side. But please also distinguish between 'religious people' and 'religious nuts'.
Many rational people (including many religious people) are allergic to nuts.

WOW, I am glad that stopped this freighter. That would have been bad news.
Bless you all.

So you think UN resolutions should be complied with?