The Writing on the Wall

However, I soon realized that I can't write a post about such weighty subjects in a week.  The posts will have to wait, but I don't want to ignore these events either.  These mosaic floors are part of our heritage.  They were built by Jews who lived here in the days when most people think we weren't here.

For example, in a recent Yesha Council Parsha page (PDF here), the children's story ended with the following sentence:  "Jerusalem became a Roman city … And yet Jews continued to reside in the Land of Israel for centuries more, until they left to Exile".

Everybody 'knows' the Jews went into Exile because that's what we hear over and over again.  The Jews left the Land and only came back when Herzl led them back.  The romanticism of Zionism trumps reality.  The author of the story had no idea when this mythical Exile started, but he knew it had to have been somewhere in the past 2000 years.

But Exile doesn't mean "Diaspora".   The Jews who lived here didn't "leave for Exile".  They "lived in Exile", because they were living under occupation, because they were not allowed to pray at our most holiest of sites, and to rebuild the Temple.   That is why we find Piyyuttim where Israeli poets mourn the Exile they were in.  The Exile was steady oppression and neglect by foreign rulers who couldn't care less about this country, and Jews living here and yearning and working for national redemption.


There is an old Jewish custom to leave one's name on holy sites.  This is probably the root of the modern custom of leaving a note by the Western Wall.

In 1654 a Karaite Jew named Moshe ben Eliyahu Halevi, visited the Tomb of Joshua in Timnat Heres (Kifl Hares) and wrote "And there on the walls of the cave are written the names of those who came there, and we also wrote our names".

In 1785 another Karaite Jew, Binyamin ben Eliyahu, wrote of his visit to sites around Jerusalem: "Every prophet we visited, we'd pray and read from the prophecies of that prophet and we'd write our names on the stones."

In 1838 Dr. Eliezer Levi (Louis Loewe) describes Rachel's Tomb as a building painted white, with tens of thousands of names written on it in Hebrew script.  In Hebron he visited the Tomb of Avner, which was also covered with the names of many visitors.

A year later, Judith Montefiore writes of her visit to the Tomb of the 70 Elders in Awarta that many Jewish names were written and inscribed on the walls of the cave.   When she reached Rachel's Tomb, she writes "and we wrote our names among the tens of thousands of other names".

So why don't we see those names today?

Because our history was literally white-washed away.

Prof. Shmuel Klein writes "We still remember the inscriptions on the stones of the Western Wall until recent times, until the 'tyrants' (ie, British) came and erased them in the summer of 1930, in preparation for the arrival in Jerusalem of the international commission on the issue of the Western Wall".    And so with a few swipes of a brush, history was re-written  for the benefit of a UN commission which was to decide the fate of a Jewish holy site.

Many more inscriptions have been found, all are evidence of the eternal bond between the Jewish people and our most holiest of sites, the Temple Mount.


All these inscriptions are in the archeological garden in the Southern Wall area.  In a normal country, these inscriptions would be protected from both humans and the elements.  Since they're not: please DO NOT TOUCH, and so ensure they are to be preserved for the next generations.

1.  "And when ye see this, your heart shall rejoice, and their bones as grass"


Location: Western Wall, under Robinson's Arch.    This site explains exactly how to find it.  The site is in Hebrew, but has very helpful pictures.

The most famous inscription is also the most unusual.  It is a partial (mis)quote of Isaiah 66:14 : "And when ye see this, your heart shall rejoice, and your bones shall flourish like young grass".

The misquote might be intentional or not.  "Their bones" makes more sense in the context of the verse (the living and dead shall each rejoice in their own way).  It might also be a reference to a nearby cemetery.


In any case, from early times Rabbis said this verse speaks of Redemption and the rebuilding of the Temple.
The inscription is usually attributed to the 4th century - in 363 Emperor Julian (Julian the Apostate) ordered the Temple rebuilt.  One of the Jews who came to rebuild the Temple might have excitedly written about it.

However, this inscription was written at what was street level up to Crusader times, and there were quite a few other times in that period when Jews thought Redemption was around the corner.

In the 5th century, Empress Eudocia, wife of Emperor Theodosius II, influenced her husband to allow the Jews to come back to Jerusalem.  A Christian monk writes that the Jews sent a letter to their brethren: "The time of our Exile is over, and the day of the in-gathering of our tribes has arrived, for the Roman Emperors have commanded that our city of Jerusalem be returned to us.  Hurry and come to Jerusalem on Sukkot, because our Kingdom will be established in Jerusalem."

In 613, the Jews helped the Persians conquer Israel , and were rewarded with a promise that the Temple will be rebuilt and Jews will regain some measure of autonomy.  A few decades later, the Muslims conquered Israel, and they too allowed Jews to settle in Jerusalem.

And, of course, it's possible this was simply written as a hopeful prayer sometime during the Byzantine or early Muslim period, with no connection to any specific event.

The next two inscriptions are dated from the Middle Ages.  Throughout this period,  Jews continued to come to the Temple Mount to offer prayer.

2. "Son of Caleb RIP, son of Joseph RIP was healed"

Caleb was a common Jewish name in the Balkans in the Middle Ages.   This was probably written by a Jew who came to Jerusalem to thank G-d after he was healed from illness.

Location: Southern Wall, 15 meters east of the double-arched Hulda Gates, at about eye-level.

There are quite a few inscriptions which are not accessible today to the general public.  Some are inside buildings, others were painted over, and some were not seen again since they were first discovered.

The next two inscriptions are inaccessible, but I thought they were quite interesting.

4. "Jonah and Shabatiah his wife from Sicily be strong in life"

Location: In the passage leading from the double-arched Hulda Gate into the Temple Mount, under al-Aqsa mosque. 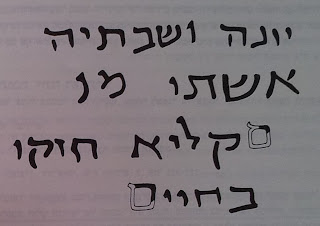 This inscription was discovered in 1863, along with several others, and was since covered following renovations.

We know from Jewish and non-Jewish sources that after the Muslim conquest Jews prayed on the Temple Mount.  They were later only allowed to pray at the gates, and later limited to just one gate.

Some researchers (Sukenik, Dinur) think this inscription is proof that Jews had a synagogue there, and that Jonah and his wife either donated to this synagogue or wanted to encourage others to come to Israel now that praying in the Temple Mount was allowed.  Dinur points out that according to the Israeli midrash "life" is "Israel".  "Be strong in life" might mean "be strong for Israel".

5. "G-d, Lrd of Hosts, build this House.  Give life to Jacob son of Joseph and Theophylactus and Cicnia and Anastasia.  Amen and Amen.  Selah.


(according to another reading: Build this house in the lifetime of.. ) 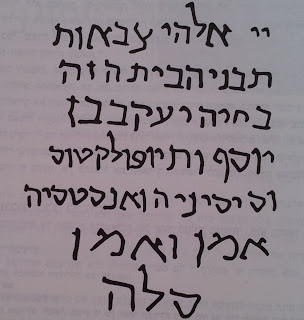 This inscription, as well as a few others, were found inside a madrassa built in the 14th century.  It is located a few meters from the "Dark Gate".  The northern Temple Mount area is filled with buildings bearing Jewish names, which points to a Jewish neighborhood in that area.

The names in the inscription are Byzantine, with Christian connotations.  This inscription was probably written either during Byzantine times, or by Jewish pilgrims who came from Byzantium.


[All images were copied from Cathedra 40 (1986), available online as PDF.  The original article, written by Meir Ben-Dov includes additional inscriptions and pictures.]

Truly amazing, you should get these posts published in JPOST or something.

May more and more come to pray at the temple mount!

erased them in the summer of 1930, in preparation for the arrival in Jerusalem of the international commission on the issue of the Western Wall". And so with a few swipes of a brush, history was re-written for the benefit of a UN commission which was to decide the fate of a Jewish holy site.
League of Nations, not UN, no?

So *that's* what happened to all the names on the Kotel in the old pictures.

@Nachum: I''d love to see such an old picture.

thanks alot very much

A person will surely seize interest if he cufflinks is sports a couple of stylish and sophisticated engraved cufflinks. Guys cuff links are the within thing this coming year and are gaining a great deal of attraction to cufflinks for men the actual younger and also the happening audience of today. Adult men cuff links cuff links are around for an individual in several fashion as well as silver cufflinks materials providing you a range of options to be able to choose a couple that not simply amuses the eyes however is also perfect for the type of garments you don.

You can purchase all sorts of of Judaica products at www.ahuva.com

This website is full of products that would make excellent bar mitzvah gifts or bat mitzvah gifts
they also have an excellent variety of anything from beautiful shofars and mezuzahs to lovely challah boards and also all kinds of things needed for a proper jewish wedding.
They even offer kosher meals!! this is my personal favorite website to shop at.
-Ben


On August 16th, the actress uploaded the above photos on her Twitter with the short caption, “After the meeting.”

Netizens commented, “Yoon Eun Hye has become prettier,” “She looks lovely,” “Show us some of your good work” and “She looks innocent yet sexy.”