A few 'firsts' in Hebrew. All stories mentioned here took place between the 3rd and 20th century, when Hebrew was (supposedly) 'dead'.

If you know of earlier examples, I’d be glad to know.

The first medical book in Hebrew is Sefer Harefuot (ספר הרפואות) - the Book of Medicines, written by Assaf ben Berechiah.  He was also known as Assaf Harofe (Doctor Assaf), and is commemorated by the Israeli hospital of that name.

He lived in Israel around the 3rd-7th century, as can be seen (among other things) by the purity of his Hebrew and by the fact that he was influenced by Talmudic and Greek knowledge, but not by Arabic medicine.

The book expects physicians to uphold a high moral standard. It discusses illnesses, treatments and prevention and prescribes exercise, healthy food and sanitation. It also describes around 100 medicinal herbs and stresses cheap medicines which can also be afforded by the poor.

The book was known in France in the 9th century, and later in Italy as well.

In the introduction Assaf brings an oath and prayer for Jewish physicians.

It begins as follows:

"This is the pact which Asaph ben Berakhyahu and Yohanan ben Zabda made with their pupils, and they adjured them with the following words: Do not attempt to kill any soul by means of a potion of herbs”


First poem written by a woman

Her poem was discovered in the Cairo Genizah, in an exchange of letters with her husband, the famous grammarian and poet.


In this poem Mrs. Donash chastises her beloved for leaving her and the family while he traveled to far-off lands.


And will her love recall his graceful doe

Cradling her son and left alone?


Who set his right hand’s seal on her left

Is not his arm wrapped with her precious stones?


That day she made a keepsake of his cloak

And he made hers a keepsake of his own


—Would he remain in all the land of Spain

If he’d been given half her prince’s throne?


Original and translation via Soul and Gone.

The only other Hebrew poetess of the medieval era that we know of is Merecina from Gerona, who lived in the 14th-15th century and wrote a piyyut which begins: "מי ברוך נורא ואדיר" ("Blessed, Majestic, and Terrible").

Samuel Vivas was born in Israel in 1550. He served as a rabbi in Safed, then practiced medicine in Cairo, then he moved to Istanbul and finally to Italy. In 1593 he converted to Christianity and changed his name to Domenico Gerosolimitano (Domenico of Jerusalem).

Then he got a new job - censoring Jewish books. In fact, many Hebrew-speaking Jewish converts worked as censors for the Church, and so Samuel/Domenico wrote a helpful instruction manual for them, which he named Sefer Hazikkuk (ספר הזיקוק), the Book of Censorship.

Some examples of these rules:


All mentions of the term משומד (apostate) which are not insulting should be replaced by עכו"ם, but if it is insulting it should be erased entirely.


Any praise to the people of Israel which implies disgrace for us, and is understood to be referring to the present time, should be entirely erased.


See here for the full intro in both English and Hebrew.


It’s interesting to note that back in those days, self-hating Jews converted.  They didn’t work for the enemy while claiming to still have Jewish interests at heart.

In today’s world, Samuel might have remained Jewish and would have justified to himself that by censoring our most holy books he was just helping Judaism and Jews. Otherwise the nations might hate us and we would bring ruin upon ourselves.

In 1866 a man in Minsk by the name of Mordechai Aharon Teomim decided to raise his newborn son in Hebrew, and only Hebrew.

In 1873, when the child was seven years old, he was met by several Maskilim - members of the Haskalah movement.  They were quite impressed with his Hebrew speech: “He speaks whatever he wishes in pure Hebrew, just as people speak in any other language.”

Indeed, they wrote about it in the "Hamagid" newspaper, hoping that other people would follow in his footsteps. 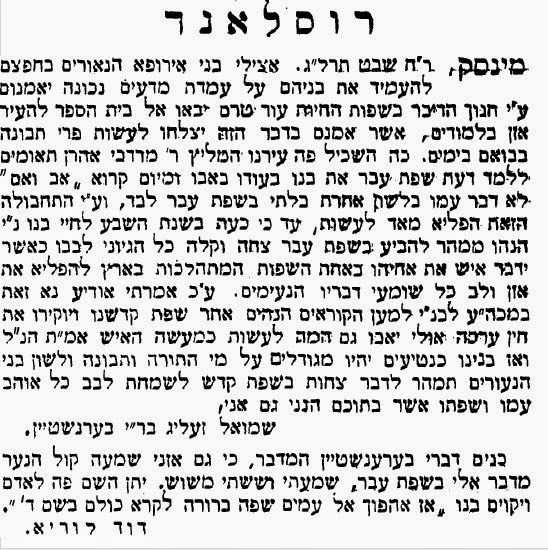 Eliezer Ben-Yehuda was only 15 at the time, so he probably missed it.


See here for an archive of articles about our history in Israel.