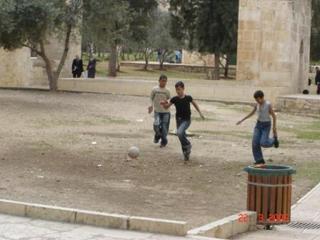 Could be any or more of the following:

For those not familiar with the situation on Har HaBayit, and I hope to blog about that soon, its the only place in Israel, where by Israeli law, it is forbidden for Jews to pray there, so as not to offend the Arabs. While the subject of acsending Har HaBayit is a very complex halachik question, there are many rabbis who permit ascension under strict guidelines of preparation (mikva) , actual ascension (no leather shoes), and path of travel (so as not to stray into forbidden areas).

This used to be a totally hands-off topic to Orthodoxy, but in the past few years, there is a large awareness campaign of ascending Har HaBayit, according to halacha. Its a very serious issue (doing it wrong/improperly can lead to the heavenly punishment of "Kareit") -- and thousands of Jews now ascend every year, b'tahara (in purity) and according to halacha.

Only recently has the Israeli government (under the brave decision pushed by MK Tzachi Hanegbi - while I may disagree with him on many issues, I have to give him credit for this) changed its position that Jews should be allowed to ascend to Har HaBayit. Yet, they still stipulate that no "incitement" take place; anything that annoys the Waqf is not permitted. Therefore, it is forbidden for Jews to pray on the Temple Mount. Moving your lips in a quiet murmuring of the Shma, tehillim, or any prayer whatsoever is grounds for immediate forceful eviction from the Temple Mount by the Israeli police. Once thrown off Har HaBayit you can be blacklisted from ever entering the compound of Har HaBayit again.

I have a picture somewhere that I need to find, of a Jewish woman being dragged off of Har HaBayit, with a policeman's hand clamped over her mouth to prevent her from continuing to say (quietly, to herself) the Shma.

Found the following from a fellow blogger -- better to go straight to his site; its got pictures and all.

Maybe they forgot their prophetic verse from the Islamic Jurists that states:

"Every game a person plays is futile except for archery, training one’s horse and playing with one’s wife"

But then again we are talking about Islam. The words of their sages are only important when it suits their needs.

They could always defend their actions by quoting Ishaq 461 where it states "Muhammad besieged them for twenty-five nights. When the siege became too severe for them, he stopped and played a game of soccer." or maybe it was that "Allah terrorised them", oh who knows, it's Islam, it doesn't have to make sense.

When Mohammad said "You must play the field" -- he was referring to the 72 Jihad-rewarded virgins.

Islamic frummies don't want kids under 10 to know "pshat", so they said he was referring to soccer.

When I was up on Har HaBayit the other day, our group was literally escorted from the very first moment, until the very end. Not ot mention that I had to lift up my shirt ot show that I didnt have any explosives strapped to my chest.

As we were leaving I asked our escort if he was going to take us back to our car , as well...

is it just me or does the 1st kid look spastic and the other 2 gay?

Hi, this site is really great. I got my meds from a reliable offshore pharmacy in 4 days. Brand and generic name meds. I used the promo code 'First' during my purchase since it was my first purchase and I got $15.00 discount.....check out www.1medstore.net