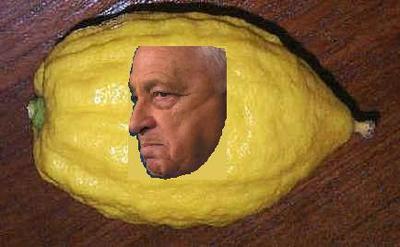 Prior to the Disengagement, the most protected political person from the scales of justice was Ariel Sharon. The Israeli media refused to criticze him, investigate his corruption, for fear of preventing the Disengagment, and the expulsion of Jews from Gaza and the Northern Shomron. The media even gave him a new name -- The Etrog. The same way an Etrog is lovingly protected before and during sukkot, so was Ariel Sharon protected and lovingly admired by the Media (and all justice).

"In 2003, the Israeli Justice Ministry sent an official request to Austria asking for assistance. The request was rejected by an Austrian court for not detailing the bribery suspicions but only Sharon's alleged campaign finance violations, which do not constitute a crime in Austria. According to Austrian Justice Ministry Spokesman Christoph Pochinger, Israel astonishingly never made a second more-detailed request."

"Ashtonishingly"...only for naive Austrians perhaps...
Posted by Jameel @ The Muqata