Nancy Morgenstern
I was sent a link to the 2996 Project from fellow blogger, Smooth Stone – it’s a blogger-based initiative which commemorates the 2,996 victims of 9/11, so I volunteered to post about one of those 2996.

While many of my friends and relatives had brushes with near-death that awful day, and each individual story is more poignant than the next, I knew it was only a matter of time till the diminutive degrees of separation of Jewish Geography would connect me to those less fortunate who did not survive.

Yet I’m good friends with her brother-in-law in Israel, so I guess in theory, I might have met her at a simcha, a family celebration of some sort, at some point in time.

On September 11, 2001, Nancy Morgenstern, 32 worked for the bond-trading company Cantor Fitzgerald on the 104th floor of WTC Tower One.

Sometime the next day, I spoke with my friend who told me his sister-in-law was missing, and we added her name to our tehillim lists, Chana Perel bat Sara. Over the coming months, my friend told me more and more about Nancy, as more never-known stories from her friends made their way to Nancy’s parents.

Nancy was first and foremost, a proud Orthodox Jew.

She was also an avid cyclist, and participated in many races. There are many stories on her memorial website from her cycling friends that describe her passion for life and strict adherence to kashrut and Shabbat, even when on cycling tours in a non-Jewish environment.

A kollel was founded in her memory. A Sefer Torah is being written in her memory. A Magen David Adom ambulance in Beit Shemesh was donated in her memory, and besides providing an opportunity to save lives, many new lives saw their first light in that ambulance as well, as over 20 babies were born in Nancy’s ambulance on their way to hospitals in Jerusalem. A whole slew of tzedaka projects came into being dedicated to Nancy’s memory – some are to private recipients and others more public. 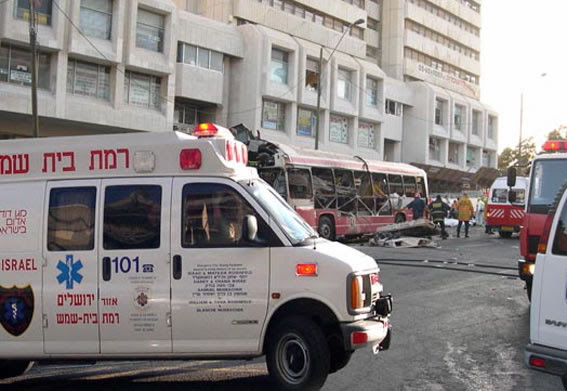 Nancy's ambulance at the scene of a bus bombing in Jerusalem 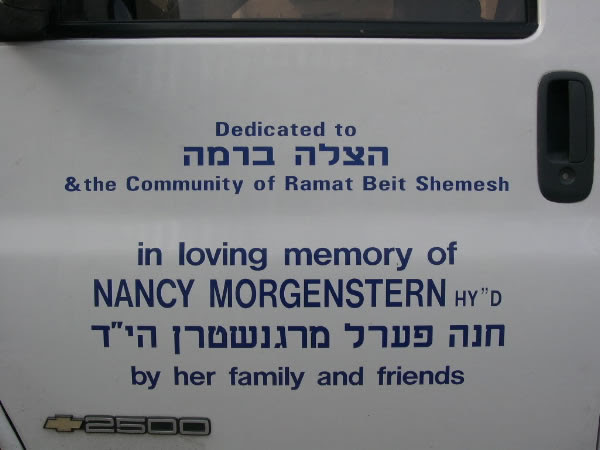 Memorial inscription on the ambulance door

And I continued to follow the story through my friend…since there was no closure. As with many victims from the upper floors of the WTC, Nancy’s remains were not found at first. A burial plot was purchased in the Etz Chayim cemetery outside Beit Shemesh in the hope that one day, Nancy’s remains would be brought to burial in Israel…and the family waited. The psak halacha they received was not to sit shiva as long as there was a possibility that her remains could still be found.

And then, just as the identification process was closing up and it was announced that all possible remains were identified…after 3 long years, DNA typing matched her remains, and were brought to Israel for burial.

I never met Nancy, but I went to her funeral in Israel -- to the cemetery in Beit Shemesh. I clearly remember one of the eulogies; when most people are buried, the memorialization process starts…yet with Nancy, there was already an entire world continuing on in her memory. Torah was being learned in her memory, lives were being saved, tzedaka was given to all sorts of worthy projects and to needy individuals and families.

Most of all, Nancy will always be remembered as an amazing friend to so many, whose passion, love of life and strict adherence to her convictions no matter what environment she was in, was an inspiration to all who knew her.

May her memory be a blessing, a source of comfort for her family – as the projects in her memory continue to add goodness and holiness to the world.

The fund is tax exempt. If you would like a receipt for tax purposes, please request one in your correspondence. 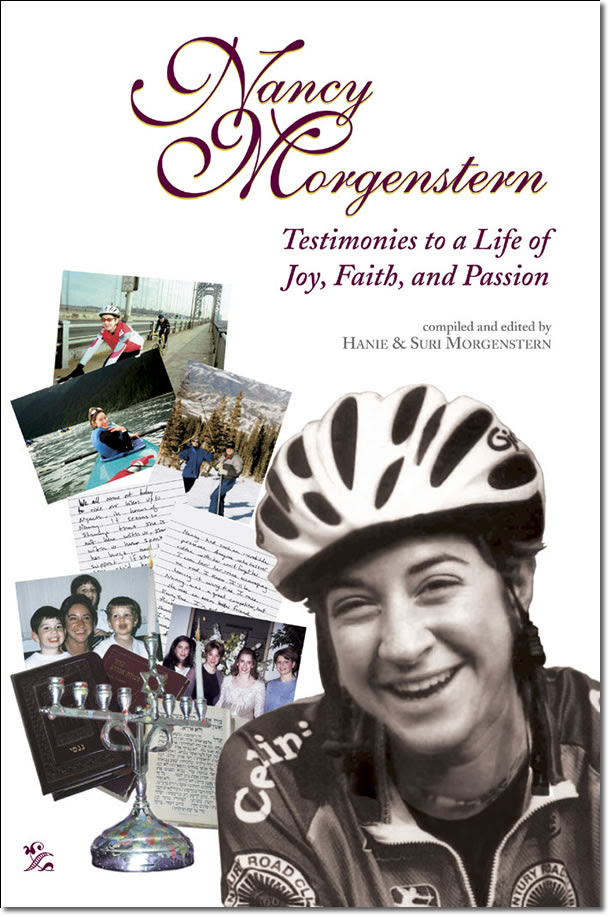 More articles about Nancy are here, here and here.
Wherever I am, my blog turns towards Eretz Yisrael
Posted by Jameel @ The Muqata

That was a very touching tribute Jameel, thanks for writing it so that we can remember Nancy.

All - you're very welcome. It was a privledge to write this in her memory.

I've seen that ambulance around RBS quite often (mostly parked, not, c"v, on business)... good to know the backstory.

In fact, I'm at least 75% sure our younger daughter was born in that ambulance... although to be honest, at the time, I wasn't paying much attention to the name on the side at the time. If so, we owe quite a personal debt of gratitude to the Morgenstern family.

One of the large shuls in RBSA also has the women's section named after Nancy, hy"d.

Good post. I linked to it. A very worthy cause.

In his Teshuva drasha 5 years ago Rabbi Frand mentioned meeting the mother of a young woman who had, a few months before 9/11, gotten a new job. When he said Cantor Fitzgerald everyone knew what had happened to her.

It wasn't until I read the Ha'aretz article about her burial that I realized that I knew her brother in law, Avi, who's from Baltimore.

Avi's brother, who was a classmate, told me that when they could finally have the levaya, it was almost like a simcha for the family. There was relief that they finally had something of her.

Thanks for writing this, Jameel.

Thanks for writing this, and relinking to the post I did. I knew many of her friends on the Upper West Side, and they're still reeling from the loss. Time may help, but scars remain.

Of course, I should have included a sarc tag.

beautifully written, jameel. thanks for doing such a great job.

A personal tragedy means so much more than numbers.

Thank you, she sounds like she was an amazing person.

very interesting tribute, especially since you may have even met her, and not known it.

Thanks for posting this excllent tribute.

I never new Nancy, but her family and my wife's family are very close. Her sister and my wife went to high school together and my mother in law and Nancy's mother are good friends. I heard some of these stories over the last few years.

May her memory be a blessing.

Wow. Nothing more to say!

I love the idea of her ambulance! Wow, that's just so neat.

Thanks for keeping her memory alive, we all lost so much that day.

Shopping the cheap battery,you can see from here.