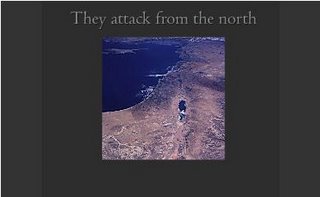 On Monday evening, my oldest son excitedly called me as I drove home from work,and yelled into the phone, "Abba, there's this story I just read on the internet; you HAVE to put it on your blog as soon as you get home! It's about this man who was arrested by the police for blowing shofar during davening...at the Kotel HaKatan...in Yerushalayim...during Musaf on Rosh HaShana...can you BELIEVE that? You have to blog that!!"

He was a bit disappointed to hear that I had posted that exact same story a few hours earlier (and that he wasn't the first to tell me), but he was still happy to know that what he thought was "blog worthy", was in fact, right on target.

Yesterday (Tuesday) evening, two of my kids took the bus to Yerushalayim and met me at work. They got off the bus by themselves (they're 12 and 10 years old), found my office, and called to say they had arrived (I was waiting for them at a different bus stop). We then drove to the Old City -- as we were going to say tehillim at the Kotel for a relative in need.

While some find driving in Yerushalayim to be annoying or difficult -- I love it.

Having driven around Manhattan a lot before moving to Israel, I find the driving experience very similar to Yerushalayim; some streets can be very narrow, cars parked all over the place...drivers who weave in and out of lanes...taxis driven by Israelis (in both cities)...street signs don't always make sense...

Driving into the Old City via Sha'ar Yaffo, my kids started asking me all sorts of questions about the Old City. "Look at this, look at that," they laughed and pointed at different sites and scenes as my van squeezed through the narrow alley-road in the Armenian Quarter towards the Jewish one. As we passed Sha'ar Tziyon, I mentioned that the IDF Tzanchanim (paratroopers) unit entered into the Old City from that gate in 1967, and the walls there are all pockmarked from bullets. A second later, we stopped, stuck in a traffic jam of cars snaking their way from the Jewish Quarter parking lot back to Sha'ar Tziyon.

Since our mission was to say tehillim at the Kotel, I asked the kids if they wanted to get out and walk by themselves to the Kotel while I waited to park the van. "Sure!" they answered, and we agreed to meet down at the Kotel after I parked. Full of self-confidence, they scrambled out of the van...leaving me to find a spot by myself as the setting sun's remaining orange glow bounced off the walls of the Jewish Quarter of the Old City.

25 minutes later, I found a parking spot and met my kids down below near the flag poles at the Kotel plaza. I marveled that they felt at home in the Old City (as they should) and my 12 year old said that he knew the Jewish Quarter, "like the back of his hand." He explained that during his Bnei Akiva summer camp experience this past summer, they had a scavenger hunt in the Old City over a 24 hour persiod, and he ran up and down the steps to the Kotel over 10 times that day.

Wanting to start saying Tehillim as quickly as possible, my daughter went to the women's side, my son and I went to the men's side, we found some tehillim books from the caves on the side of the plaza, and walked up to the Kotel.

I wasn't sure what perakim to say...which chapters. Tehillim has so many chapters, where should I start? I decided to say the chapters for the 4rth and 5th of the month, since we were in the twighlight between the 4rth and 5th days of Tishrei, and the surgery was going on now.

As I started to recite Tehillim, I was amazed at the chapters designated for those two days. Coincidence that surgery for the person fell out exactly on the twighlight between these 2 days, during Tishrei? The chapters I said for the 4rth day were these (link here) and for the 5th day were these.

The 4rth day's were those one usually says in times of distress and those said during the month of Elul and Tishrei for Rosh HaShana and Yom Kippur. Very solemn stuff.

I was surprised by the abrupt change of mood. From solemn chapters beseeching for help, and declarations that G-d is the ruler over the universe -- the 5th day's chapters were a totally different theme. Upbeat. Positive. From Kabbalat Shabbat and davening.

We finished saying tehillim and davening almost an hour later and walked back up the stairs towards to Jewish Quarter. A boom shook the air, and my kids looked at me. "Ramadan" I reminded them, and we heard sporadic firecrackers from the Muslim Quarter. Stopping at the top of the stairs, we took another look back at the Kotel and Har HaZeitim, and I felt very content that we said tehillim, davened at the Kotel, and had a good opportunity to walk around the Old City. 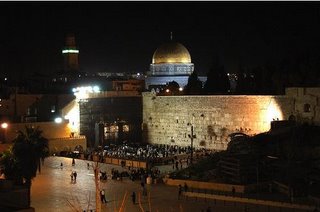 Went to Bonkers Bagles for a quick bite, drove home...and found out the surgery was over and things were looking promising.

Credit for Video: Friday in Jerusalem
Created by Gil Ronen, gil@katzir.com
Video Hosted by IZFONE -- Izfone is a leading Voice over IP service provider specializing in the Israeli market.

"Look at this, look at that," they laughed and pointed at different sites and scenes as my van squeezed through the narrow alley-road in the Armenian Quarter towards the Jewish one. As we passed Sha'ar HaArayot (The Lion's Gate) I mentioned that the IDF Tzanchanim (paratroopers) unit entered into the Old City from that gate in 1967, and the walls there are all pockmarked from bullets. A second later, we stopped, stuck in a traffic jam of cars snaking their way from the Jewish Quarter parking lot back to Sha'ar HaArayot."

You are probably talking about the Zion Gate (Sha'ar Tzion). The Lion's gate is nowhere near the Armenian or Jewish Quarter.

glad to hear things are looking promising.
And it's not a coincidence with the tehillim.

(i miss the old city though. would be nice to go back there, even just for a day. I hadn't thought about Bonkers Bagels in ages though... brings back so many memories.)

CosmicX: You are 100% correct. Updating it now.

Refuah Sheleima.
I was in that Bonkers store yesterday. :)

ah, driving in jerusalem. this is one of those posts i've planning to write but will probably never get to. how can you compare driving in jerusalem to manhattan? the latter is MUCH simpler, at least as far as layout, traffic patters and signage a reconcerned(and israeli drivers are much safer than here in new york). and bonker's bagels? puleez! you subject your children to that? most of the time i get jealous when i read about your life in the holy land, but after this post i'm not so sure.

I really would have liked to see you drive through the Zion Gate. It can be done and if you do so without scratching your car, you are awarded the Jerusalem Eternal Driver's Certificate. Actually, I saw two vehicles doing it today as I walked up from the Begin Center to the Moriyah bookstore (and back).

Next time we meet (still awaiting the first), maybe we can do some of the Old City. My wife and I lived there as a young couple during 1970-71 but, on second thought, probably a lot has changed. (and now I go over to see if Truth is still at it).

Jews davening at the Kotel? Tssk tssk, what is this oilam coming to?

Back in the good old days the Jordanians would have put a stop to that.

You've been in Israel so long (OK, not as long as the Medads) that you're taking something for granted that should be a theme/message.

Your kids, not even teenagers, are able/allowed to wander around the city, new and Old, take public buses etc, freely! Your not an abusive dangerous parent.

With all that people write and say about Israel, it's still one of the safest places.

YMedad- I've done it plenty of times and bli ayin hara not a scratch: Where do I get my certificate?!

you took the photo of the kotel, ye?
it is absolutely stunning!