The Elephant in the Room. 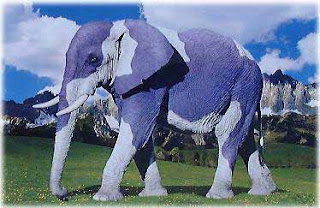 The elephant has been here for a few months, but only recently has it started getting bigger.

Taxi drivers discuss it with their passengers...

It is axiomatic that the news media is the last to know in Israel. From the time we arrived here, we have been told "the taxi drivers know." This could simply be urban legend, as I would very much like to believe, but recently I have been paying more attention as the taxi driver contingent in Jerusalem somehow gets wind of things ranging from sports to diplomacy to gossip and has oftentimes proved correct.

The news media is full of dire reports of Syrian units moving up to the Golan; of an Arab daily in London claiming Hezbollah's "surprise" for Israel is chemical and biological weapons; Nasrallah's boast that he is more and better armed than last summer; the upsurge in diplomatic Double-Talk about how no one wants war but everyone will respond to Other's "aggression," and so forth....(from "A Baka Diary")

The problem with a large-scale operation right now is that the timing is off. Prime Minister Ehud Olmert is busy preparing for the November peace summit in the US; a major operation that would most definitely draw many casualties would cause its cancellation. The IDF is also still concerned about the possibility of war with Syria; an operation in Gaza could turn that fear into a reality.

So while everyone knows about and it's even Shabbat table talk, no one is coming out right to say it. Today, Israel still refuses to admit anything...but the elephant grows even larger.

Syria: Air defenses fired at Israeli aircraft over our airspace

The Israelis broke the sound barrier and "dropped ammunition" over deserted areas of northern Syria overnight, the spokesman was quoted by the official Syrian Arab News Agency. (JPost)

"The Israeli enemy aircraft infiltrated into the Arab Syrian territory through the northern border, coming from the Mediterranean heading toward the eastern region, breaking the sound barrier," the spokesman said. "Air defense units confronted them and forced them to leave after they dropped some ammunition in deserted areas without causing any human or material damage."

Military sources declined comment on the report, saying "the IDF does not comment on reports of this nature."

Prime Minister Ehud Olmert's office said it was looking into the report.

Wish I could end this posting off with something optimistic, but the elephant is listening.

this whole situation is very disconcerting. i just saw on the news, literally seconds ago, a computerized rendering of the three planes flying over syria and dropping bombs. unfortunately, i can't say that i understand any of what they're saying, aside from random words in no particular order.
keep posting updates so i can understand the pictures on the news. :D

We're taking bets on my set as to what day the war breaks out...

Summer has been longer than I expected.
See here:
http://atthebackofthehill.blogspot.com/2007/06/four-fronts-gaza-west-bank-southern.html

Optimistic, I'm not. Attitudinally positive, however, I am.