Team Building at the JBlogger Conference? 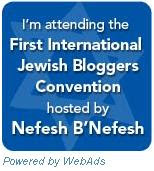 You know it's coming up soon.

The buzz is everywhere.

Even if you aren't on the panel, just showing up is worth a JIB award.

How can you go wrong?

Yet, with all that said, I'm still hard at work convincing Nefesh B'Nefesh not to implement some of the "team building" activities that the IDF intelligence division has been using for it's elite officers. The IDF is at the forefront of everything today, so why not follow their lead in team-building techniques as well?

Then this story appears today:

Senior IDF officers from various technology, intelligence and special-operations' units were summoned to a 10-day workshop, which included lectures, tutorials and coaching sessions – as well as a fire-walk.

The workshop and been conducted for several years and with great success, a source in Military Intelligence told Yedioth Ahronoth. The fire-walk, however, was a new addition, introduced for the first time this year.

And walk they did: Three of the officers suffered light burns and were treated on site, a fourth required medical attention, and four others ended up seeking independent medical care.

Sources in Military Intelligence later commented that while the importance of leadership workshops in great, the fire-walk was a redundant, dangerous exercise, which could have ended much worse; adding that the only thing the officers learned from it was that if you walk on hot coals – your feet will get burnt. (YNET)

I certainly hope this isn't what Baila meant when she described the appearance of her feet as a "unexpected bonus" for making aliya?

And yet...I'm still concerned about my anonymity.

Do I wear a smiley face? A Burqa? Tell everyone I'm Rafi...or JoeSettler...or DovBear?

How about a badge bearing the name "Anonymous"? :)

How about writing "Jameel" on your badge?

How about everyone getting a yellow smiley mask at the entrance and then we'll all be anonymous?

Guess who's coming to town - and joining the SerandEz/BeyondBT Shabbaton? Come on, guess! Oh, okay, fine, you'll never guess - while neither is able to make it for the whole Shabbos due to prior obligations, both Kasamba from England and Jameel of the Muqata in Israel will be joining us for the SerandEz/BeyondBT melave malka!!

Hey, Jameel, who are you fooling?

you could never pass yourself off as joesettler. he carries a glock and you an m-16

great food? what are they serving?

LoZ: Im carrying a Glock 24x7. The m16 is only lichvod shabbat around the yishuv.

YMedad: Actually, I have less of a problem of people in NYC seeing me than here in Israel.

But that's a different story.

And I'm with Rafi--curious about the food. I plan on being there early. You know how it is with Jews around a buffet.

Aw, gee, forgot my manners there for a second.

Thanks for the link. And no, I wasn't invited to this team-building exercise. The last thing the IDF wants is Baila walking the coals...

Everyone is going to be introduced as "Jameel."

the whole jameel/smiley face/anonymous thing still cracks me up. every time.

I'm considering wearing purple feathers and a large Palestinian flag to disguise myself: I'll bring one for you as well, if you want? :-)

Yeah, let's see them let you in the door with the flag. They'll tell you to hang out with the protesters outside.

That's what you get for playing games with your name. It's like telling lies, it gets very complicated. So much easier to just be me, ok, with three blogs, but all me.

Aside from watching Mrs. Muqata kick you under the table, will there be any other entertainment?