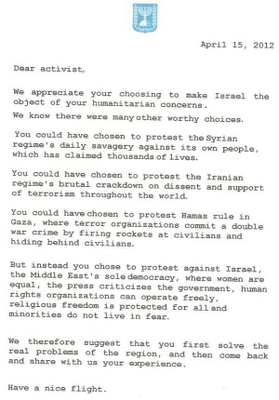 Israel is gearing up to deal with the upcoming "flytilla" infestation of "activists" from around the world, arriving today for the "Welcome to Palestine 2012" campaign -- who plan to go to Bethlehem and create mayhem and mischief in their wake.

The Middle East is currently overwhelmed with real, serious human rights violations; such as the brutal slaughter in Syria, or the Hamas occupation of Gaza and their rocket strikes on Israel's civilian population.

The US-backed "Palestinian Authority" just announced that the death penalty is being applied to the Palestinian who brokered the sale of the "Machpela" house in Hebron...by Arabs...to Jews.

The Death Penalty. Death. For selling a house to a Jew...

Yet these atrocities are of little concern to the flytilla activists who are bent on Israel's destruction.

This morning, an IDF radio reporter, Tali Lipkin Shachak chided Israel's deputy Foreign Minister, Danny Ayalon for Israel's "treatment" of these "activists", and why we don't simply provide them with a seminar to educate them on the folly of their ways. Ayalon replied that the activists aren't interested in hearing another side of the story or even facts. Lipkin-Shachak doesn't want to hear the facts either, and she thinks these activists really care about human rights. Not the first time either. Oh well.

A good week to all our readers....as I hope to start posting regularly again.

I suspect the reason these "activists" are coming to Israel is because if they were to do a fly-in to Damascus, Gaza City, or Tehran, they would be greeted by handcuffs and a one-way trip to the pokey, not a politely worded letter.

Why would you assume that if they were to fly into Damascus, Gaza or Tehran, it wouldn't be to show support to the current regime?

That's what they're doing right now for them when they fly into Israel.

I meant a fly-in to protest the current regimes, not support them.

Why would they fly in to protest the current regimes? They're supporting them now with their attacks on Israel

They didn't fly into Tunis or Egypt. There's no precedent for your supposition.