Today we commemorate our fallen soldiers and terror victims, followed tomorrow by Israel's Independence Day.  The idea of commemorating terror victims together with fallen soldiers was and is a controversial decision.  Therefore, it's interesting to note that terror victim #1 on Israel's list was killed not only for being who he was - a Jew living in Israel - but for what he did - reestablishing Jewish national pride.

R' Avraham Shlomo Zalman (The RASHAZ) came to Israel in 1811 with his family: his wife and three little children.  He was among the hundreds of students of the Vilna Gaon who came to Israel in the early 19th century.

R' Shlomo Zalman was one of the first who spoke of Jews in Israel turning to productive work.  He foresaw a land where Jews would settle their land, build houses, open businesses, and stop relying on the money sent by Jews from abroad.   He studied silversmithing, and once he got to Safed, his first stop in Israel, he opened a workshop.  From then on he was known as R' Shlomo Zalman Zoref ('silversmith').  Later he bought land near Ramla, by the villages of Qazaza and Al-Mansura (today Mazkeret Batya), which was farmed by his son.

In 1813 a cholera epidemic hit Safed, one of many misfortunes that befell the city's Jewish community in the upcoming decades.  R' Shlomo Zalman decided this was a good time to risk going to Jerusalem.

More than a hundred years earlier, in 1700, a group of European Jews led by Rabbi Yehuda Ha-Chasid came to Jerusalem.  They bought land and built a synagogue.  But their leader died upon arrival, and the group fell apart.  The Jews couldn't pay their debts and taxes for the new building, the Arab creditors burned the synagogue down, and the entire Ashkenazi community was run out of town.  Since then it was known as Rabbi Yehuda Ha-Chasid's Ruin ('Hurva').  Only a few Ashkenazi Jews remained, living 'undercover' by blending in among the Sephardi Jews.

For a hundred years, any Jew who looked European and showed up in Jerusalem was expected to pay off the debts of his landsmen or risk jail or worse.  In order to enter Jerusalem, R' Shlomo Zalman and his comrades "went undercover" as Sephardi Jews: they dressed in the manner of the Sephardi Jews and spoke Arabic.

The Sephardi Jews of the city allowed their European brethren to pray in a side room of their synagogue.  The Sephardi synagogue complex was made up of several  sub-subterranean rooms, which desperately needed repairs.  But R' Shlomo Zalman did not suffice with this arrangement.  He had his sights set on an ambitious project which became his life's work: to rebuild the Hurva Synagogue.  A proud symbol of Jewish national revival in Jerusalem and Israel.

The opportunity presented itself when Muhammad Ali Pasha, the ruler of Egypt, conquered Israel in 1831.    In 1834, Mordechai Shnitzer, who was one of R' Shlomo Zalman's friends, got permission from Muhammad Ali to renovate the Sephardi synagogue complex. 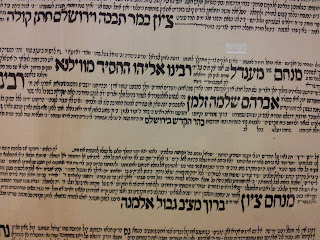 The first stage in rebuilding the Hurva was to release the Ashkenazi Jews from the debts of their 'ancestors'.   With political cunning, R' Shlomo Zalman got the Egyptian ruler to issue a firaman (government order) absolving the Jews of their debts and restoring the Hurva compound to the Ashkenazi community.

Rabbi Joseph Schwarz writes: "On the 18th of Elul 5596 (1836) we gladly started clearing the piles of dirt from the lot, and we discovered all the old buildings that were there: the synagogue and the mikveh [ritual bath] and several three story houses ... we also found ancient manuscripts from 5339 (1578) signed by Rabbi Israel Najara"

When the Arabs saw that the Jews started clearing the the rubble from the ruins of the synagogue compound, one of them hurried to build eight shops on the lot.  R' Shlomo Zalman bought the shops. The Arabs then threatened to kill any Jew who dared rebuild the Hurva compound.

In response R' Shlomo Zalman announced that all Jews must come and participate in the Mitzvah of clearing the rubble.  Hundreds of Jews responded to his call.  The Arabs stood around them, stones in hand.  R' Shlomo Zalman stood on a pile of rubble and threatened the Arabs, saying that if any of them dared enter the courtyard, the Jews would arrest him and turn him over to the authorities.

The Jews renovated one of the buildings in the compound as a synagogue and named it "Menachem Zion" (based on Isiah 51,3: 'For the Lrd has comforted Zion, He has comforted all her ruins').  A first step in rebuilding the Hurva itself.

However, the Jews were still not allowed to build a new synagogue.  The Jewish community split into two camps.  One, led by Rabbi Yeshaya Bardaki, feared repercussions from the Muslims, and proposed that the Jews just do with small synagogues.  The other, led by R' Shlomo Zalman, insisted on building a monumental Jewish center which would be just as impressive as the Christian or Muslim places of worship.

It was only after the Crimean War that the Jews were allowed to rebuild the Hurva Synagogue.  Building commenced in 1857 and the synagogue was dedicated in 1864.  The Hurva Synagogue became a national institution for the Jews of Israel.

However, R' Shlomo Zalman didn't live to see the realization of his vision.  Twice Arabs tried to kill him.  The first time an assassin shot R' Shlomo Zalman, but missed.  The would-be assassin drowned as he tried getting away.  The second time, in 1851, an Arab attacked R' Shlomo Zalman with a sword, right by the Hurva compound.  R' Shlomo Zalman succumbed to his wounds three months later.

R' Shlomo Zalman's legacy lived on.  His son, Mordechai, who changed the family name to Solomon in memory of his father, was instrumental in developing Jewish business and agriculture in Israel.  As was his grandson, Yoel Moshe Solomon, who is most famous for founding Petach Tikva. 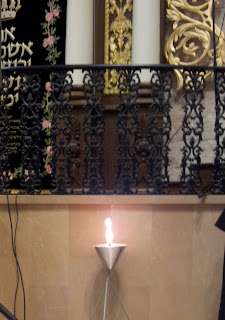 When our 'Palestinian peace partners' protest that they don't have anything against Jews, it's only those evil Zionists with whom they have a problem, it's important to remember, especially on this day, that the man the State of Israel honors as its first terror victim was killed long before Herzel was even born.  When R' Shlomo Zalman came to Jerusalem, Jews were a minority.  By the time he was killed, Jews were almost half the city's population, and by the time the first 'Zionist' set foot in Israel, Jews had regained the majority in Jerusalem.   All, in no small part, due to R' Shlomo Zalman's efforts, and his conviction that Redemption will come when Jews stop fearing the gentiles and start taking action.

Perhaps you had seen this article from last week by R. Shlomo Zalman's descendant - or perhaps not: http://www.thedailybeast.com/articles/2012/04/19/take-responsibility.html

Jameel: I understand your need for revenue, but your scrolling ad from jewishpress.com is so annoying that (regretfully) I have to stop looking in here every day. I'll look in again in a week or two, and stay if the ad is gone. If not, good luck.

@Elli Fischer: I didn't see it, thanks for posting it. This article is definitely thought provoking. I don't know whether 'making a new society' is a prerequisite for 'taking responsibility', and I don't know whether R' Shlomo Zalman would have seen himself as a Zionist.

The talmidim of the Vilna Gaon, the GR"A, were settling Eretz Yisrael at his instruction. He himself was prevented from coming here, so he sent his students and told them exactly what to do when they got here. It's written in his "Voice of the Turtledove". The GR"A wanted to rebuild Zion. (this is quite a responsibility)
I think that's why the Ashkenazim here in Yerushalayim follow his minhagim and not as they do in Brooklyn NY!
But its late and I'm tired and hope I got this straight!

@Neshama, that's right. The students of the Vilna Gaon really deserve a post of their own, they were amazing people with so much to teach us.