The house that can't be sold

Baruch ben David Mizrachi came to Jerusalem in the early 17th century.  There he bought a building with 5 rooms-apartments on what is now Ha-Malach street, by the Armenian Quarter.

Jerusalem wasn't a very attractive place back then.  A Jew of that period wrote a chronicle of the evil reign of Ibn Farouch, who was so despotic he had to close the city gates to prevent the people - Jews, Christians and Muslims - from fleeing.

In 1643 Baruch willed the house to his sons on the condition that it will never be sold and that when Messiah comes, he will get it back "so that I will have a house here in Jerusalem, may it be speedily rebuilt, when our Messiah comes".  Indeed, the family never sold the house and lived there continuously until the 20th century.

Baruch had many famous descendants, among them Rabbi Nissim Chaim Moshe Mizrachi, who served as the Rishon Le'Zion (Chief Rabbi) in the 1740s and who, together with his brother, Rabbi Israel Meir Mizrachi, was known as the "Eastern Lights" (Nerot Ha-Mizrachi'im).

In 1905, a dispute arose between one of Baruch's descendants, Elazar Eliyahu Mizrachi, and a neighbor.  The neighbor had built a wall right up to the Mizrachi house, making one of the rooms unlivable.  The court ruled in favor of Mizrachi and ordered the neighbor to pay compensation.

Elazar Eliyahu produced the will and explained that compensation amounted to selling the house and would be against his ancestor's wishes.  However, he had a responsa manuscript, "Pri Ha-Aretz part 3", written by Rabbi Israel Meir Mizrachi, which had not been published yet.  He suggested the neighbor pay for the printing of the book, and enjoy all the profits from it, except for a set amount of books he'll gift to Mizrachi.  That way the book will get printed, Mizrachi will get some compensation, and the neighbor will not pay for the house.  The court agreed, and the book's introduction includes the court's decision as well as a reprint of the original will.

After the Six Day War, Israel confiscated the homes in what is today the Jewish Quarter (which did not exactly correspond to the 'Jewish Quarter' before the Jordanian occupation), and gave the former residents compensation.  The Mizrachi family refused to accept compensation, which would amount to selling the house.  Instead, they asked a sign be put up on the building, telling its story. 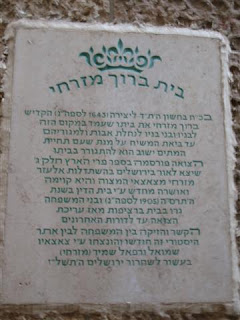 Since then Jerusalem mayors have promised the family that at the end of days, when the Messiah comes and Baruch Mizrachi shows up, ownership will revert back to him.