In honor of the event, I collected various short stories and "two-sentence mentions", shedding light on Jewish history in the areas conquered during the Six-Day War.    (This post is not meant to be comprehensive, and is biased towards the eras and places I'm more familiar with.)

Throughout the Byzantine period the Golan was a densely populated Jewish area.  The Jews of the time considered it a completely Jewish region, an extension of the Galilee which was the most Jewish region in the land.

Samaria, as its name implies, was a Samaritan center.  The region's main city, Shechem (Nablus),  had a small Jewish community.

In the 16th century there was as small Jewish community in Jenin (Ein-Ganim), mentioned by Polish-Lithuanian Prince Nicholas Christopher Radziwill who toured the land, as well as by several Jewish scholars.  In the mid-17th century a French doctor wrote of Jewish merchants who lived in the town.  A few Jews continued to live in Jenin until the Arab riots of the 20th century.  (See here for more on Jenin's Jewish history)

In 1831 Arabs in Shechem rebelled, and holed up in Sanur.  One hundred Jews from the Lebanese towns of Deir el Qamar and Hasbaya were sent by the Druze Emir Bashir II to quell the rebellion.   They succeeded, making a name for themselves.    Jewish soldiers fought in Samaria again in WWI, when the Jewish Legion was stationed at the front which spanned from Jericho north-westward to the coast.

In 1906 the extended Shertok family leased a farm in Ein Sinia, hoping to establish the first Jewish farming community in the mountains of Ephraim.  They established an olive press and employed both Jewish and Arab workers.  However financial difficulties, among others, finally forced them to abandon the effort.  The family's son, Moshe Sharett later became Israel's second prime minister.

Today it is sometimes dangerous for Jews to travel the roads.  It may not be very comforting to know that in this we continue a long-time Jewish tradition.  As recently as a century or two, any Jew going from one city to another said Hagomel - the prayer of thanksgiving - for succeeding in making it alive.  Which brings up a sad fact of Jewish life: Responsa books are filled with stories of Jews who were killed on the roads.  Today, these stories remind us that though life was extremely difficult, Jews clung on to their homeland.  Just a couple of stories: In 1665 three Jewish merchants were ambushed and killed in Rantis on their way from Shechem to Lod.  The Arab Riots of 1936 started with the murder of two Jews on their way from Tul Karm to Shechem.

In the mid-17th century Eugene Roger, a French priest, reported that there were 7-8 Jewish households in Timnat Heres (Kifl Hares), along with around 60 Muslims.

Timnat Heres was one of several spots on the itinerary of the Jewish pilgrim.  These included Shechem, Awarta, Shiloh, Nabi Samuel (Tomb of Shmuel), Bethlehem, Tekoa, Halhul and Hebron.   Prof. Joshua Prawer points out that the pilgrimage was as nationalist as it was religious.  Jews connected and laid claim to the land by associating themselves with their forefathers, the Jews who lived here before them.

Jews lived in Jericho during the Byzantine period.  However, as Jericho became a more intolerant Christian city, its Jews moved out to Naaran.  Christian sources describe Naaran as a proud Jewish town.   After the Muslim conquest, Jews returned to Jericho and built the famous "Shalom Al Israel" synagogue.

Jews exiled from Arabia by Muhammad made their way to the Jordan valley and what is today northern Jordan, where they kept a distinct ethnic identity.  A Muslim historian records a meeting with one of the Jews of Khaibar in Jericho in the early 8th century.

Judea, as can be seen from its name, was a hub of Jewish life, well into the Muslim period.

In the Byzantine period the region between Hebron and Beersheba was named "Daroma" (The south).  Some of the more well known Jewish villages in Daroma were Yuta (Yatta), Eshtamoa (As Samu'), Susya, Carmel and Maon.   Once the small Jewish towns and villages disappeared in the 9th century, the main Jewish presence remained mostly in Jerusalem and in Hebron, where nearby Jewish villagers remained as late as the Crusader era. 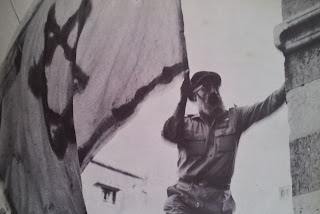 Though most Jews lived in Jerusalem itself, a passing traveler in the 14th century tells of Jewish pottery makers who lived in caves of the Valley of Hinnom.  Turkish court records tell us of Jews who bought orchards all around Jerusalem, including Sheikh Jarrah, Beit Hanina, Sur Baher, Beit Mazmil (Mount Herzel), Lifta, Qalunya (Motza), Sataf , Malha, al-Walaja, Al-Eizariya (Bethany), Beit Safafa, Beit Iksa and Samwil.

Samuel's Tomb (Nabi  Samwil, Rama) was a focal point of Jewish pilgrimage throughout the post-Crusader era.  The Jews bought the burial cave and built a synagogue and residences on the site, as well as facilities for the many pilgrims.  The place was confiscated from the Jews in the 16th century, but Jews continued buying property (land and businesses) in order to hold claim to the site.  In the 16th century Sephardi Jews attempted to establish a farming village there, unsuccessfully.   The Jews were banished from the synagogue but continued to pray in the burial cave until the early 18th century, when the authorities closed off the cave and turned the site into a mosque.  Jews from Jerusalem settled the place again in the late 19th century and were  later joined by a dozen Yemenite families.  The village, Nachalat Israel - Rama, suffered greatly from the Arab neighbors, and in the 1920s the place was abandoned.

The Jewish community in the Gaza region centered in Gaza City.  The city's synagogue is from the late Byzantine era (the synagogue mosaic is displayed in the Israel Museum and the Mosaic Museum next to Maale Adumim).  According to Karaite scholars, Jews who yearned for Jerusalem and the Temple would gather on the holidays in Tiberias, Gaza and Zo'ar (south-eastern Dead Sea).

In the 11th century Rafah (Rafiah, Hazor) had an organized Jewish community and Genizah documents mention their judge, Dayan and hazan.  It was one of three known forts (מבצר) , the others being Dan (Banias) and Haifa.  The city was destroyed by Saladdin.  In the late 19th century there were Jewish attempts to build a village in the area.   A documented Jewish community also existed in El-Arish in the 11th and 18th centuries.

Last, but not least: Way, way south, Jews established a semi-autonomous community on Tiran Island (Yotva) in 473 while it was under Persian control.  It was later reconquered by the Byzantines, who let the Jews be, until Justinian I revoked their autonomous state it in 535.

Hello my Jew friends, we just updated our new website which is talking about all you can think about

in the Jewish world, mostly about traditions, festivals, videos and communities around the world.

Hope you like it and find it handy :)
Jewish communities

Hi,
I'd like to inquire about doing a sponsored blog post - about 150-300 words that talks a little bit about cars and automobiles and links back to our site http://www.nissanofsanbernardino.com. We are a car dealership and thought we might be a good fit for your readers/visitors on http://muqata.blogspot.com/.

Here's a list of some blog post titles we've done in the past:
- What To Look For When Buying A New Car
- 2012 Cars That Look Good And Saves You Gas
- Reasons Why Buying New Cars Is Better Than Used

Our budget is around $15 for the post. Is this something you'd be open to?

When i see your article i know that i will agree to the article you done sir.We knew that the Jewish and Torah will give us a good reason to post and i knew that the post you done come to a good brain.People will find the meaning of Jewish and Torah and i will help to this website, I will fallow to this article forever.We love to announce that we have a Jewish history and now you can receive our weekly torah portion

Thank you so much and more power
Visit Us: http://www.bethyosef.com/