Critical Analysis: Who is Yair Lapid?

Even though I wrote this below, I believed it deserved it's own post. 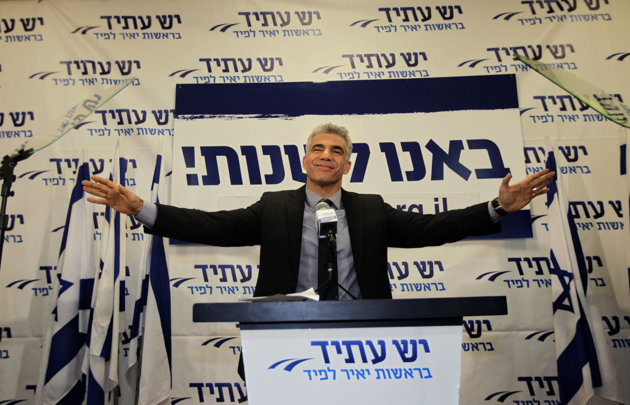 1. Yair Lapid is already predicting he will be Israel's next prime minister.  Unfortunately, he never finished high school, or completed his baguryot (high-school matriculation exams) or went to college. However, as a media personality he got into Bar Ilan's accelerated doctorate program -- which is supposed to only be for those who finished an undergraduate degree with honors...he was eventually thrown out of the program for not meeting the admission requirements.  Granted there are many autodidacts who lack academic accreditation and attain success in business or academics or education; Lapid isn't one of them (keep reading).

2. Lapid used his personal YNET column to childishly insult and viciously lambast an awarded, outstanding IDF soldier, and used illegally obtained private and classified IDF information against the soldier.  When sued in court, Lapid lost.  Not exactly the moral and ethical beacon for Israel.

3. Lapid is pretentious yet grossly ignorant at the same time.  While he may come across as a dynamic media personality, when he puts pen to paper, his lack of intelligence shines through.  Let's take an article he penned about Israel, "Israel Democracy Institute says 81 percent of the public wants a constitution; not me."

Lapid explains why the US Constitution is work of art -- because it was penned by a single author [sic], John Adams[sic], as opposed to a committee [sic]  -- which is the way Israel is attempting to create one.


Israel's proposed constitution by consensus is an erudite text, maybe overly so. It lacks the emotional depth of the US constitution, not to mention the moral courage of the “Founding Fathers” to deal with controversial issues. It could be that the different way in which the two constitutions were written influenced their content.

One very inspired man, John Adams, wrote the US constitution. The Israeli proposal by consensus, with all due respect to Meir Shamgar, the former Chief Justice of the Supreme Court, was written by a committee.

It would have helped had Lapid has the time, energy or acumen to at least read the Wikipedia article on the US Constitution to know that it WAS written by committee, not one man, and certainly not John Adams who wasn't even on the committee or in the US at the time, he was in London. If you think that's embarrassing, its only the tip of iceberg.

Here's a short video (in Hebrew) with a whole slew of intellectual gaffs by Lapid which appears to show a pattern of attempts to drop names and facts which aren't that factual or connected.

4. Since entering politics a year ago, Yair Lapid tries to portray himself  in the political center, however he has always been far to the left.  Before entering into politics, he spoke his true colors to Germany's Der Spiegel:


Yair Lapid: The greatest tragedy of the Israeli-Palestinian conflict is that everyone knows how it will end. We will divide up the region. Israel will return most of the West Bank, and the Palestinian flag will fly on public buildings in East Jerusalem. The only unanswered question is how many more people will have to die along the way. And so we will fight against the extremists on both sides, including our extremists, the settlers. When you look at the history of wars, they ultimately revolve around one claim: "My god is better than yours."

It's clear that Lapid is intent on splitting Jerusalem, something Dov Lipman adamantly denies.  He hates settlers and is intent on ensuring we all know who the "extremists" are.  Lipman has gone on record saying that he's in favor of keeping settlement blocs -- as an FYI, this means Hebron will be of Israeli control (and it also makes you an extremist to expect the Cave of the Patriarchs will remain under Israeli control).

5. While Dov Lipman claims that the "real" Jewish Home is his own "Yesh Atid" party, Yair Lapid's Jewish Home is a Reform Temple in Tel-Aviv. I have no issue with Lapid's connection to the Reform movement in Israel, or even providing them with funding which they deserve. I am concerned that the lowest common denominator of Judaism in Israel will be changed (religious status quo of halachic Jewishness), which will fracture the Jewish people in Israel, prevent marriages, and will result in far more disunity than unity.

While many have been extolling the virtues of Lapid, he's simply a popular media personality who lacks the intellectual depth, and moral/ethical foundations required to be a serious leader in Israel, let alone Prime Minister.

Jameel,
You omitted the part where after the disengagement he admitted that the whole thing was just an exercise to punish the settlers, and show them who's boss.

Shaul: I thought of that as well. Lipman claims that Lapid was only "telling it as it was" and not projecting blame.

I guess I'll add it. Thanks. I wish I wrote this before the election, not that it would have done any good.

Jameel: I think you're a little too hard on R' Lipman. I also think he's been taken, but he's an honest and sincere person, and to that end, I'll predict that he'll quit the Yesh Atid faction before this Knesset completes its term.

Shaul: He's a very vocal advocate for Lapid and got lots of people in Beit Shemesh to vote for him.

I don't think that I'm being too hard on him -- since he's sugar-coating Lapid.

(And he defended Lapid's position on the Disengagement)

I would assume that R' Lipman and the other 17 people riding Lapid's coattails into the Knesset will go their own ways prior to loosing the next election. Isn't that always the way it is with the rock-star parties?

"While I think that Yair Lapid’s party is simply a respin of existing centrist parties, and will eventually disappear like all the previous ones (Kahalani’s Third Way, Lapid’s father’s party -- Shinui, Kadima, etc.) – yet you feel torn between voting for Lapid and Tzippi Livni, PLEASE vote for Lapid’s Yesh Atid."

-Jameel before Lapid won a victory in the elections... "

The last anonymous was me.

SPIEGEL: Yair, you became a journalist like your father. Could you imagine following in his footsteps and going into politics?

Yair Lapid: I've thought about it.

Tommy Lapid: Yair is too modest. In fact, hardly a month goes by without Ehud Barak, the chairman of the Labor Party, asking him about it.

Shulamit Lapid: I don't think Yair is made for it.

Your post on Lapid is an eye-opener. I didn't know much about him, but although my older son (living in Israel) didn't vote for him, he read his "platform" after the election and seemed to think it was reasonable. With your permission, I would like to reprint your entire post on my blog. If you don't grant it, I'll be happy to link to it instead.
Kol tuv.

Neshama: That is correct, I did reccomend voting for Yesh Atid before the election, because as bad as it might be, Tzippi Livni and her movement are FAR WORSE.

Don't get your hopes up about him disappearing into the pages of history. That's what we thought was going to happen to Obama -- not only was he going to disappear but he would crash, burn, be obliterated and go down in history as the most laughable reject of a president ever. Yet, he was somehow re-elected. It is partly because we had a similar situation of voting for the lesser of two evils in a lot of people's opinion. And a lot of people chose wrong because of the promise of free birth control or the promise of more handouts. You very clearly pointed out Lapid's lack of knowledge on several subjects and his real feelings. Yet, people didn't care did they? It seems the delusion the people of the world are under is much stronger than facts or truth. If Israel follows the trend set in the US (and I hope NOT) -- then you are in for more of the same and probably worse.

It seems my first comment sent from my iPad didn't land on your blog; however, the second post did?

According to this recent article, Lapid is no longer associated with the reform movement. Like most secular israelis, he probably finds it empty.

This blog is a month or two late.

anonymous: yeah, I thought about it. Regardless, I think Yair Lapid and his list was a better choice than Livni's Movement.

John Madison wrote the document that was presented at the Constitutional Convention. Major changes were made at the convention so the US Constitution was ultimately written by a committee.

David Galant: You're an idiot. Didn't you read Lapid's article? It was written by John Adams and NOT a committee.