How Will the Mosque Be Removed?

Jeremy Gimpel jokingly mentioned in a video one method in which the Mosque on the Temple Mount might be removed.

The question is, even in jest, was Jeremy right? 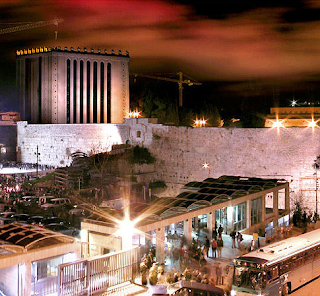 With all due respect to this future MK, the answer is no, Jeremy wasn’t right.

There are traditionally two interpretations as to how the Temple will be rebuilt.

The first is the one that, for instance, Neturei Karta firmly believes.

For them, the Temple will suddenly come down from heaven only after the Mashiach arrives (and the land is cleared of the Tsiyoinim), and human beings will have no apparent role in the matter.

Following on the logic of that theory, the Neturei Karta apparently believe that the mosque will be squashed underneath the dropping Temple.

I wonder if they've bothered to mention that to their terrorist friends over tea.

But the more traditional belief is that we Jews will rebuild the Temple ourselves – and that is actually a far greater miracle.

So as I asked in the beginning, "What about the Mosque, which is rather inconveniently sitting where the Temple should be, how will it be removed?"

The simplistic answer is that it will be destroyed. 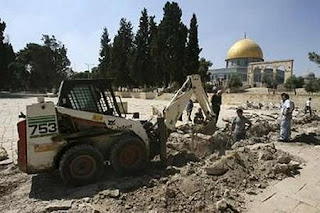 But both answers are wrong.

According to Jewish thought, the Arabs, at the time of the Mashiach will remain in Israel - but they will fully repent.

You see, when the miracle happens that we Jews will be united in our vision that it’s time to rebuild the Temple, the Arabs will be there too, and they will lovingly dismantle the Mosque stone by stone on their own volition, and rebuild it elsewhere.

That is the second part of the miracle of the rebuilding of the Temple.

In the end, the Arabs will want peace, will recognize the spiritual value of the Temple, will recognize what they have to gain by being allies of the Jews instead of enemies, and they will then take the peaceful steps needed to properly honor and worship God.

May the Temple be speedily built in in our lifetime. Amen.

Isn't there a prophecy about the Kidron Valley spliting straight down the middle and then from Har Zeitim to the entrance of Har HaBayit? Would this not 'dismantle' Har HaBayit and possibly reveal that which is hidden beneath? After which the (re)Building would take place?

[A little extrapolation on that prophecy by me]

Agree with Neshama. There will be earthquakes and that is how it will happen. We know that at the end of days, Hashem will use His forces of nature. Also, we will start with the building but it will be the Heavenly Beit HaMikdash that will be, as it will be the eternal Beit HaMikdash.

"According to Jewish thought"

Are we going to see an endorsement from Jameel or Joe for Tuesday's election?

I say we get that giant animated foot Monty Python used to squash people they didn't like in their skits!

On IsraelNationalRadio's "TempleTalk" show, Rabbi Chaim Richman told an amazing story from his boss, Rabbi Israel Ariel, founder of the Temple Institute. Rav Ariel was one of the paratroopers who liberated HarHaBayit in 1967. When he and his comrades approached the mosque, a young Arab man greeted them, and offered to show them around the place, very gladly. He was a regular tour-guide for the mosque. Later, when he was asked why he seemed so happy to meet them, he told them he of course believed that the Biblical prophecy had come true, so by guiding them around, he was helping restore the Temple to its rightful and proper status (as a Jewish-run place of worship).

Thanks a lot, Moshe Dayan...

Jewish Odysseus, the worms are happily going about their job.

"and rebuild it elsewhere" - new one for me, and sounds plausible. Can you point to the source? I don't want to just say I read it on a blog.

The Rashi, when it discusses Yitzchak and Yishmael together burying Avraham, says that Yitzchak is mentioned first despite Yishmael being older, because Yishmael did Tshuva. From there start other discussions about about Z'man Hamashiach.

"Rebuild it elsewhere" - that just makes sense to me, since they'll do Tshuva and want to have the Temple there too, and after all, it was used for monotheistic prayer, so to senselessly destroy it is purposeless.

And besides, not just any blog, it's "The Muqata".

Who's afraid of Jeremy Gimpel? I am!

...but not for his views on how what structures should or shouldn't be on the Temple Mount.

I'm afraid for the reasons which NO ONE wants to talk about.

Never heard of anything so against Torah, as that stated about the Beit HaMikdash built anywhere else but on Har Habayit. Also, there will be no more mosques, churches, etc. The whole reason we pray for Moshiach to come (G-D's holy servant) is that the world will know, at long last, that there is only H' and no other, and that the Land of Israel belongs only to the Bnei Yisrael! This is the problem with the internet, reading some of the either blasphemous or ridiculous interpretations. Seems whatever is to one's liking, even if completely false, gets posted on a Jewish site.

Shoes protect your feet from injury.
Wrong again (sort of). Shoes can protect your feet from some acute injuries, but I’ve noticed that people step on nails with or without shoes. Many people fear broken glass, but broken glass is rather rare these days (“plastics make it possible”) and is actually not that dangerous anyway. While stepping blindly and forcefully on a huge shard of glass can cause a severe cut, that kind of thing is not likely to happen on the sidewalk. (Ironically, it is likely to happen while wading in a littered river, which lots of people do, barefoot). On the sidewalk, most broken glass is small and lies flat. As for nails, it turns out that it’s better to actually step on a nail barefoot than while wearing shoes. Why? Because the shoe is a hotbed for bacteria (remember that Pseudomonas?) and the likelihood of a dangerous bacterial infection skyrockets from your shoe. Lastly, while shoes may offer some protection against acute injuries, they are responsible for most of our chronic foot injuries, like bunions, Hallux valgus, hammer toe, over-pronation, fallen arches, etc. etc.