A Shomronim "mezuza" -- a pasuk from the Torah hung on the wall inside the house. Guess I shouldn't call it the "Torah" because its not really the same as Judaism's. Well maybe the same, but they are a different religion.

Living on Har Greizim, overlooking Shechem lives a small community of the Shomronim/Samaritans. Since this topic came up on a different blog, I decided to write a quick summary of my trip their last sukkot. They don't live that far from the Muqata -- and it was easy getting there. Well, easy if you carry an M16, and have rock-proof windows, but I don't consider that a big deal.

The Shomronim are the descendants of the Kuttim, whe were brought to Eretz Yisrael from Kutta, as part of an Assyrian policy of trans-migration, after the destruction of the Kingdom of Israel (10 tribes), 150 years before the first Beit Hamikdash was destroyed (Melachim II 17:24). The Shomronim originally converted to Judaism because of fear of lions that attacked them, but were eventually rejected by the Jewish people and deemed to be non-Jewish (see Chulin 6a; Even Ha’ezer). Update; The Shomronim disagree with the above and claim to be descendants of the tribes of Efrayim, Menashe and Levi

There are 2 communities of Shomronim living today in Israel; one community in Holon (near Tel-Aviv), and one on Har Greizim, overlooking Shechem. Next door is the Jewish town of Har Bracha, and there isn;t that much interaction between the 2 communities. One's Jewish, one's Samaritan -- yet its eerie that there can be so many familiarities between them, yet they are still different religions. The Shomronim community in Holon wishes it could integrate more with Israeli society, and say they are part of "Adat Yisrael" -- but they aren't Jewish, and it just causes problems of intermarriage (as if we don't have enough problems in Israel as is).

A good site from a Jewish perspective on the Shomronim is here: http://www.campsci.com/iguide/har_gerizim_and_har_ayval.htm

In addition to Har Greizim, there used to be small communities around Israel, with a few in the present day Ramla area. http://www.ramla.muni.il/E_ramla/history/shomronim.html 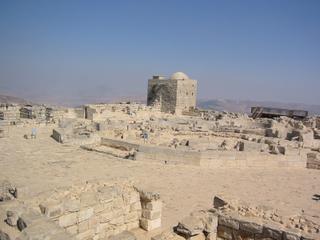 Har Greizim actually has 2 communities on it [not including the Jews living in the town of Har Bracha, a seperate part of the hill] -- the Palestinian (Area A!) and the Samaritan community (Area C). Here's a view of the Palestinian side from the Samaritan side. The large building is just a big house. 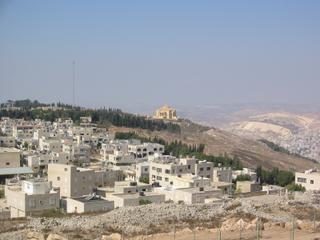 Taher took us into his home and showed us the "mezuzot" on his wall. (I'm pointing - a rare glimse of Jameel) 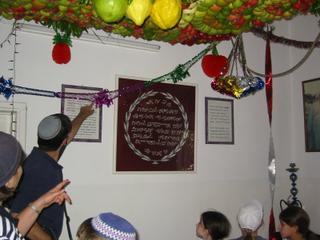 He showed us his "sukka". A Samaritan "sukka" is indoors, and consists of a latticework with fruit hanging off it. The fruit is arranged in square/rectangular geometric patters -- usually with etrogim int he middle. It smells amazing. 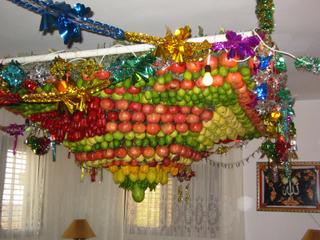 Anyway - thats enough on the Shomronim for today. Back to regular Muqata reporting in our next post.


Posted by Jameel @ The Muqata

freaking cool-
i was once on the d train and a black hebrew informed me that i was NOT the real jew, that rather he was the child of the 12 tribes,the real JEW.
so i told him that it is a shame, that no one told this to hitler.

Thanks for a very interesting post. It would have been better without the polemic though.

mis-nagid: Thanks. I did provide a link to an article which IMHO gave ample insight into their point of view. I have my own point of view on things...I don't think I was too hard on them. I'll probably go back again this sukkot, and I'm still in touch with Taher.

Regards from the Muqata.

Thanks for the info, I enjoyed it.

If you want to know more, find a reliable Rav Mikkubal and ask him about them, particularly about the oil they use for "looking" and evil-eye practices.

anonymous: I don't go to them for crystal ball viewing...I go to Har Greizim, cause its a great attraction, and right near Har Bracha.

As for Rabbanim Mekubalim, they didn't exactly get it right about the hitnatkut, "not happening"

nice blog, as somebody who lives in har Bracha id just like to say that we do have contact with our neighbours, i am without a vehicle and rely on them for hitch hicking an essential part of the mitnachel life style
Shalom

amshi, instead of commneting, hou about posting something on your blog???????????

I'm usually not a fan of Gehry's work, but this is an exception. Using wood as a wrapper imitating structure is not only novel, but ties the space down through the use of a consistent, inviting, and non-distracting material palette. Perhaps Gehry is more suited to small-scale projects Laptop battery.

I think that is we go to Israel or another Africa country, we can find a lot of interesting things like ancient books and scriptures, this would be amazing because i like a lot this kind of culture.

Using wood as a wrapper imitating structure is not only novel, but ties the space down through the use of a consistent, inviting, and non-distracting material palette. Perhaps Gehry is more suited to small-scale projects

this is really breathtaking...thanks for posting it...

Another great article. That is very good post you shared. Thank you to all that have contributed.