Amir Peretz. My kids know him as "the bad guy with the mustache."

Why is he a "bad guy" -- well for starters, he's personally responsible for the terrible labor union strikes we've had around the country for the past 10 years.
When he wants a strike, he goes for the jugular -- schools, preschools, government offices, social security, electric company, Bezeq, Airport, Mail...just to name a few.

Then I got these bumper stickers for him today. 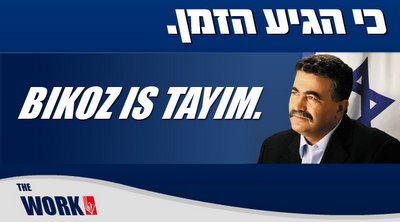 Scary to think he's the chairman of the Labor party, err, "The Work" Party.

That's too funny. Rude, base, and insulting... but funny. Have any spares?

TAFKAPP: That was nice! Besides, has Amir Peretz ever played nice with us? Even once?

Mike: Rude, Base and Insulting? That was him speaking, not me...I couldn't have done that video had I tried.

I mentioned my disdain for the man a few months ago. No way could I ever vote for him after living through so many garbage strikes, airport strikes...you name it.

great bumper stickers. I say vote for the "work" party.

Hey Jameel,
Aren't Amir & Duvidl Levy gonna have the worldwide language of the US and other continents changed to Ivrit? Now that'll be worth striking for!

Bumper stickers! Of course! I should have made "throw me down the stairs my hat" stickers.

Great post Jameel. And thanks for adding me to your blogroll. I feel the love.

Did I hear correctly, or did he actually skip over some words towards the end of the clip? Like, he-he-he st-st-stuttered over them for a sec, but then moved on?!?

Is it me or does he look like he could be related to Saddam with that mustashe?

Maybe he is just trying to fit in with the local Arab leaders with that look.

I need to check your blog more often rather than just IMing throughout the day - this post is great, where did you get the stickers? I love the first of them.

But if the United States has a President who can't speak English, why can't Israel's Labour party?

Bad tactics, Jameel. Any voter who becomes convinced that Peretz is unqualified will probably vote for Olmert - a net loss for right wing coalition leverage. Keep you sights on Olmert.

Ironi: This wasn't a smear Peretz tactic...it was a look what a fool Peretz is from the bumper stickers I got.

Besides - I went after Olmert last week.

he's personally responsible for the terrible labor union strikes we've had around the country for the past 10 years. When he wants a strike, he goes for the jugular -- schools, preschools, government offices, social security, electric company, Bezeq, Airport, Mail...just to name a few.

So why didn't he go to jail, and get disqualified from standing for the Knesset, like Feiglin? (No, don't bother answering that, we all know the answer.)

[Peretz's] English is so lame, that my spoken Chinese is better than his English. (Many trips to Hong Kong did wonders for my spoken Chinese...but I'd have to brush up on it a bit before returning)


Hmph. What's spoken in Hong Kong is properly referred to as Cantonese; "Chinese" normally refers to Mandarin (a.k.a. Putonghua) which is spoken by very few Hong Kong People.

As is said in Hong Kong (where I lived for more than three years): Yau moh gau cho ah!

As previously mentioned, the bumber stickers are trully special! About the Olmert thing I think I'd rather vote Avoda then Backwards but maybe I've had too many beer rights(pun intended)

you're a racist ashkenazi or worse a self-hating Sephardi. Either way you will be the reason for the destruction of Israel. the arrogant refusal to compromise or lack of humanity and outright hatred of your levantine self. maybe his english is shakey but his arabic is probably better than yours so we may have a better chance of peace. or do you want to send your daughters and sons to another yom kippur war? you probably never fought in battle did you? Amir did and almost got killed fighting for chickens like you.

anonymous: You really crack me up.

I'm the reason for the destruction of Israel? Because of a bumper sticker? Or because I put up a video of him speaking English?

And what the heck do you know about my arabic? Can't you read? It's at the top of my blog!

Fought in battle? Sorry buddy, but you picked the WRONG guy. And chicken is probably the last thing to call me. Besides, I don't cause tens of millions of shekels in damage to the economy by striking...he does.