For the sake of completeness, this is the followup to Morning Travels part #1

Blogger isn't working well, so I wasn't able to upload more pictures than there are now. I'll try later to update this with more. 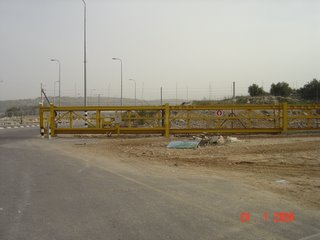 There are many possible routes for me to get to work every morning – yet the most depressing by far is via Checkpoint Eliyahu. Don’t worry if you haven’t heard of it – no one’s ever heard of this border crossing since the sign was only put up a few weeks ago; everyone else calls it “Machsom HaPeirot” (The Fruit Barricade Checkpoint).

The HaPeirot name is purely historical since there isn’t any fruit anywhere near the checkpoint, but long ago, 15 years in the past, there used to be an intersection at the edge of Kalkilya and Kfar Sava where Jews and Arabs sold fresh fruit and vegetables in an open air marketplace. Flowers, trees, plants and produce -- there was lots to buy in that market. Those days seem SO long ago...
Those were the days before Oslo, before the peace process, before the current Intifada, when there were no checkpoints at all between Israel and the Shomron.

At the “Fruit Intersection” Arabs and Jews flowed freely back and forth through Kalkilya and Kfar Sava and I would often buy there fruit and flowers for Shabbat. It was a hustle bustle of cooperation and coexistence, that while it may not have been utopian, it worked well, and everyone seemed to get along. Terror was at a low point in 1991, the old intifada had gone away, and life was pretty decent.

Since Oslo started, one of the first things the government did was re-demarcate the Green Line by dotting all the roads with checkpoints. While Israel’s policy had been since 1967 to remove all semblances of the Green Line, the Labor government decided to recreate it. That’s how the Fruit Intersection changed to the Fruit Checkpoint. Same place, the fruit vendors were still there, but traffic jams now started every morning…not only for Palestinians, but for Jews as well. You could get stuck at the checkpoint for 30 minutes in an annoying traffic jam as the soldiers checked cars.

When the first signs of a major PA-led Intifada erupted in 1996 (when the Kotel Tunnel was opened), the first shots were fired from Israeli-provided-rifles to the PA, and Jewish cars were being targeted from Kalkilya, just spitting distance from the road. Those were the end of the fruit market days. Walls of dirt and rock were placed up along the side of the road facing Kalkilya (an ecological nightmare), the last vestiges of coexistence disappeared, and the entire area from the road adjacent to Kalkilya was bulldozed away and cleared to give the IDF a better view of terror threats emanating from Kalkilya.

Last year, the "security" fence came from the North, plunging into the Shomron -- with heavy machines cutting into the mountains, carving out security roads, and putting up miles and miles of electronic fence. Moving the green line eastwards, the fence was about 5 kilometers east of the original Fruit junction. Since people need to go through the fence in an orderly method, the Fruit Checkpoint was built.

Don’t be mistaken, this was not just a checkpoint but a border crossing, so that if and when someone decided to hermitically seal the “security fence”, a huge yellow gate could be shut across the road, totally disconnecting the east side of the green line from pre-67 Israel. 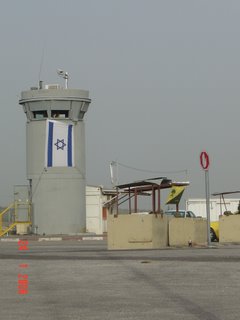 On the other side of the road is the “pillbox” and lanes of traffic going westwards. No one cares about the eastbound traffic, except for the police checking from time to time for stolen cars, or during this past summer, when they prevented right wing demonstrators from trying to get to the Northern Shomron communities. The pillbox is a grey concrete cylinder that overlooks the entire checkpoint, presumably so the soldiers up above keep watch of things going. The word pillbox is also historical, going back to the British...and I don't have the time to google for it. Know why? Drop a comment. 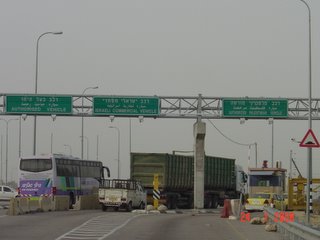 The traffic approaching from the East splits into 3 lanes – Palestinian cars with permission to enter pre-67 Israel, Israeli cars who don’t live in the Shomron (Israeli Arabs and Jews alike), and then, the special “easy pass” lane for those who live in the Shomron, (via special high tech identification methods) 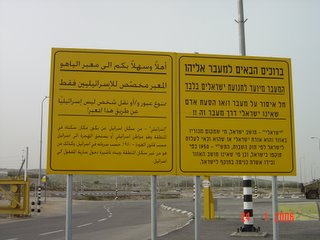 This sign announces who is allowed to go through the “Authorized Vehicle Lane” and it’s interesting that although the caption of the sign says that only Israelies are allowed through the checkpoint lane -- but if you read further down, you see that it includes anyone who could POSSIBLY be an Israeli, by the right of return.

Olmert announced yesterday that the Kadima party plans on keeping 3 settlement blocs and everything else will follow the path of Gush Katif: Unilateral disengagement, the destruction of Jewish communities, and Israel’s retreat from lands that overlook the entire Coastal Plain. The Muqata is not in any of those 3 planned blocs…and to tell you the truth, I’m still trying to digest that fact…

The rest of my ride to work was uneventful, till I got stopped by a herd of goats crossing the road. 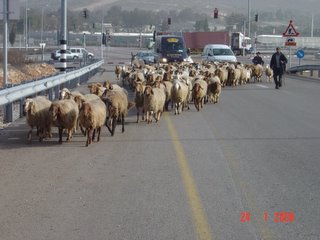 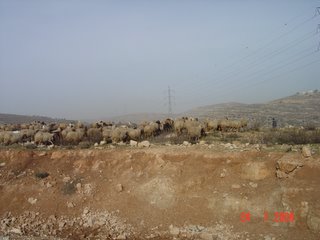 All sorts of annoying reasons can cause traffic to stop these days, but I’m always happy to let a herd of goats stop traffic for a minute or two – it gives you a short breather from the frantic pace of life in modern Israel to reconnect to the more biblical and ancient side of the land.

Well, pillboxes are probably named because that's what they look like (original pillboxes were rectangular bunkers). Wikipedia seems to agree: http://en.wikipedia.org/wiki/Bunker#Pillbox .

You're writing is really refreshing. The way you described pre intifada Israel/Palestine are the days I long for. You almost made me tear... I miss peace so much, thank you for writing this...

Those goats were really refreshing after those dismal images of the checkpoint - thanks!

Reminds me of "Make way for Ducklings" of my childhood.

Jameel - I worked for about a year in an industrial zone about twenty minutes away from my yishuv. I needed to drive through two Arab villages, which I enjoyed very much. After the hectic rush in the morning getting little ones off to kindergarden and school, I loved seeing the mists slowly lift off the mountains as the sun warmed everything up. I remember seeing the Arab girls walking to school in their blue striped uniforms, and the only traffic jam was an occasional herd of sheep crossing the road.

This, of course, was before the second Intifada and the paving of a bypass road.

WBM: I much prefer my usual route to work, which goes through many interesting villages...and I still see the school kids going to school every morning.

The rising mists off of Gav HaHar always remind me what a wonderful place we live in.

I should take my camera with me to work more often.

This is the problem: We've all got things we long for, all got our own ideas about what is best for Israel, and they are so far apart from each other.

The Jordan Valley isn't too popular these days, but there is one of those huge yellow gates and border inspection lanes separating the Beit Shean region from the Jordan Valley area.

I guess that that's for when they decide to throw that away too.

Perhaps therein lies the problem. We're still in golus... including those who are zocheh to live in Eretz Yisroel.

i just love the name Checkpoint Eliyahu - it's like Checkpoint Charlie, only, sort of, frummer...

i just love the name Checkpoint Eliyahu - it's like Checkpoint Charlie, only, sort of, frummer...ummer...

We're not in the ghetto either.

Of course, if there was real peace, we'd be able to safely drive and walk and hike and cycle any place.

Checkpoint Eliyahu may sound frummer, but it doesn't make us any happier.

(I hope Aish doesn't come after me for that line.)

jameel - i would interpret Aish coming after you as an indication that the line was logical and reasonable and made perfect sense.

It's either you or me, but one of us can't tell a sheep from a goat.

ironi: Hmmm....I definitely saw some goats, but you seem to be correct that most of the pictured 4-legged animals are sheep.

Damn. What songs are there about being a Shepherdess?

Parrot: probably something from Heidi? :)

Those are sheep not goats.

The local sheep produce coarse, carpet-grade wool - but they are sheep, not goats.

Has anyone mentioned a timeline for evacuations in your area, or is it all theoretical at this point?

I just found your blog on the net, it has been a great read! I noticed label printing mentioned in one of the comments and just thought i would add a quick comment back on this topic. I use to own some label printing software but i must admit i was terrible at printing labels, in the end i actually gave up and looked for a stress free way of getting my labels printed. I found a british labels company whilst searching on the net they printed all my labels for me as a really low cost, it saved me so much messing around.

It worked well, thanks for sharing such useful things.