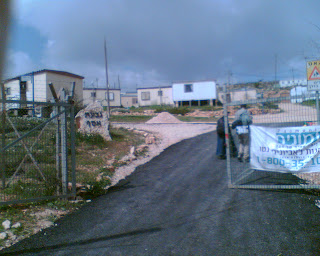 Israelis don't say "goodbye" but rather "lehitraot", "meaning see you again." (OK, there are Israelis who use the slang word "bye", but that's not Hebrew).

I had SMS exchanges last night with people in and around Chomesh about what time the forced evacuation was to take place. We decided it would be in the early daylight hours of the morning...and the text message I received "Pinuy [evacuation] is NOW!" came at 6:38 AM.

Everyone knew this was coming, yet no one regretted going to Chomesh, even if it was only for a few precious days.

Unfortunately, the Israeli police came armed and wearing their black riot uniforms, which was totally unnecessary, and totally provocative, yet we have no expectations for sensitivity from the Israeli government, which brutally bashed heads at Amona, and STILL has not provided ANY long-term solutions for the Gush Katif refugees.

About 100 were arrested for no reason at all, and the vast majority of the re-settlers went quietly...the police dropped them off at neighboring yishuvim (settlements), and I drove 7 of them home.

I dropped off a family of 3 at Givat Assaf, an outpost between Beit-El and Ofra. The young family with their infant daughter had spent the last 2 days in Chomesh. While the husband slept most of the ride, the wife spoke quietly to their 11 month old daughter, who was exceptionally well-behaved and content, strapped into a car seat in my van.

This family had lived in Gush Katif...in Shirat HaYam, and were evicted during the Disengagement by the Israeli government. They were thrilled to take part in the "Chomesh First" campaign even though they knew the odds of being able to remain were a million to one.

And they would and will be ready to do this again.

Only having my cellphone camera, I took some pictures of them walking up to their caravan, and of the "Givat Assaf" outpost.

They were far from defeated, and were in good spirits.

We shall overcome, and return, and rebuild. 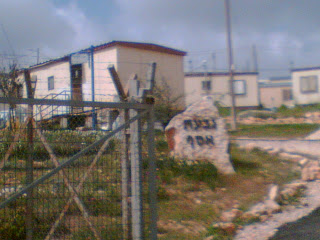 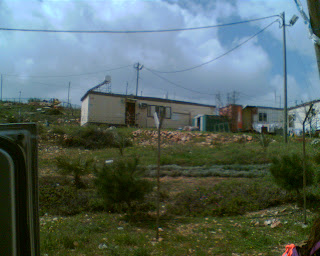 Look, I dont get it!! I simply left my house, hitched to shavei shomron, stood by beit keneset for 30 min and ka-ching we had a kvutza! do you know how utterly simple it was to get around the army ? sadly one of our guys was hurt and by the time we got him into a army jeep the 3 of us lost the rest of the group.. bnig deal! I just found another kvutza!

No the magavnikim were not overly violent, but dumping 50 guys on route 60 in the burning sun is pretty brutal!

I have never been to Israel. I feel drawn to The Land. I pray you are successful in returning and rebuilding Chomesh.

Givat Assaf looks like the FEMA trailer parks that dot the Mississippi Gulf Coast(provided for those who lost their homes in Hurricane Katrina). Very small! And yet, the people who live in them seem to have the same undaunted spirit whether in Israel or Mississippi.

Jameel, you are so lucky and blessed to be living where you are. That's all I have to say.
-OC

yo you get my text earlier ? now its on the news we'll see how this plays out..

I seriously have to get pesach cleaning started but b'kitzur maybe a hike out friday and spend shabbat there ? may be a problem regarding eruv though..

to see Homesh as it was in August 2005 go to http://community.webshots.com/slideshow/420498921eKKVPH?mediaPosition=10&track_pagetag=/page/photo/travel/middleeast&track_action=/ActionsBox/Slideshow

So if I understand it correctly, people are evacuated from their homes and now *no-one* lives there.

I think a lot of the reason Europeans are unsympathetic to Jewish settlers is they have an impression that Palestinians are being kicked out of *their* homes. It's certainly the impression the media here convey (not that there's been any media coverage of this march in the UK).