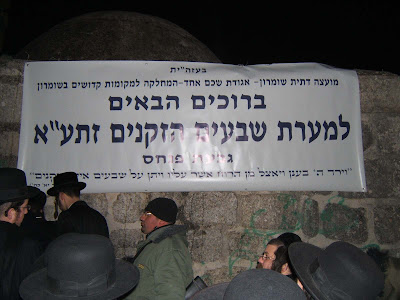 I've been really busy lately -- which is why I've been blogging less. Not that I don't have a million things to write about. In fact, I'd like to finish this week the following posts I started writing:

and a few more.

Actually, I'm so busy that an event I normally would have gone to, I had to pass up. One night a year, the IDF allows access to the village of Anapta in the Shomron/Shechem region, and allows Jews to pray at the graves of the 70 Zekeinim and 2 of Aharon HaCohen's sons -- Itamar and Elazar. For those of you who don't know, Rafi G's "Life in Israel" blog has many posts that could easily be found here (and vice versa). Since I couldn't go to Anapta last week, I did the next best thing -- I called up Rafi G and he blogged it.

So what was I doing in the hills of the Shomron in sub-zero weather?

That leads us to the review of my latest Adventure in Eretz Yisrael..

At about 8:30 PM on Thursday night, Jameel calls me up on the phone. Whenever Jameel calls, you know something is up. He tells me that he just got word they are opening the village of [I could not catch the name of the village], and this is a place they only open to Jews once a year. In this village are the grave sites of Elazar and Isamar, 2 of the sons of Aharon Ha'Kohen, and the gravesite of the 70 elders. The buses would be leaving from "Bat Shalosh" at about 12 am and there was no need to pre-register.

So I head out to the Shomron. The trip was pretty smooth. Driving through the Shomron at night is a bit spooky, if you are not familiar with the roads. You drive through some Arab villages that straddle the "highway". You know that if you make a wrong turn you will end up on the morning news as the victim of a lynching. The signs "could be better", the lighting of the roads "could be better".

Read it all here (with pictures) at Life in Israel.

Email ThisBlogThis!Share to TwitterShare to FacebookShare to Pinterest
Labels: graves in Israel, life in israel, RafiG

thanks for the link, and for the phone call!

To the Master Chef and one of the Smarter Voices:

Can't wait to read about the REAL REASON Bush came to Israel [waffles and muqata]!