Today in Israel; on my mind

Funeral going on now in Jerusalem for the Rosh Yeshiva of Mir in NY, Rav Shmel Birenbaum. zt'l.

He was one of the great masmidim of the generation. Contrary to many other Roshei Yeshiva, he would spend the day in the Beis Medrash, sitting on the back bench and talking in learning with the guys (not just come in to give shiur). He had an ironclad rule - he stays in the Beis Medrash until the end of second seder, which I think in the Mir is about 8:00 PM. That means anyone who wants him to be mesader kiddushin must wait - he won't leave seder early! (hat-tip; friend from RBS)

Katyusha attack last night around 2 AM on Northern Israel.

Last night around 2 AM, 2 katyusha rockets were fired from South Lebanon into Israel, hitting the community of Shelomi. No injuries were reported; the 2 rockets landed on a street and in someone's back porch causing minimal damage.

Did you know that a month ago 2 additional rockets landed in Kiryat Shmona?

In light of the upcoming Bush visit, posters have been put up around Jerusalem. Since free speech is something not yet internalized by the Israeli government, police or courts (let alone the media) -- the posters are being called "hate posters" and "incendiary" (though calling the posters "incendiary" would in my opinion seem to be incitement, but never mind). Oh, and those putting up the posters were arrested by the Police. Nice. Judge for yourself...do you think the message of releasing terrorists and providing them with weapons and ammunition is accurately expressed by this poster? 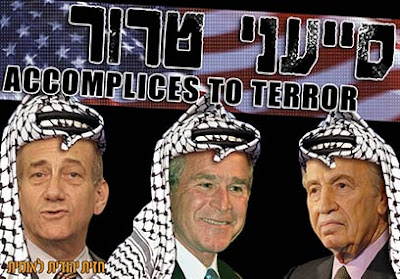 Ive received this about 10 times from different people so far. Traffic around Jerusalem and on the main highways into Jerusalem is going to be a mess for the upcoming days due to Bush's arrival.

Traffic changes for the capital: Motorists and city residents should expect massive traffic congestion and road lock-down in central Jerusalem starting Wednesday morning for the three-day visit of US President George W. Bush. Police urge the public to avoid the area around King David Street altogether.

NO PARKING: From Tuesday night, no parking will be allowed on the following streets: Gaza, Rupin, King David, Agron and Jabotinsky. Any vehicle parked on these streets will be towed to a special lot to be set up in the city's Teddy Stadium.

Police will leave notices on buildings along the main streets and areas scheduled to be closed, with a timetable of planned closures. Police appeal to the capital's citizens to use public transportation for the duration of the visit to reduce congestion.

Egged bus routes will be altered according to security needs. POLICE HOTLINE: 1-700-506-677 with real-time updates on closures and recommended routes.

The worst news though; US considering an international force in "West Bank"

The US is preparing a plan to station third party troops in the West Bank to secure the area after an Israeli withdrawal and before the Palestinian Authority can take over full security control, The Jerusalem Post has learned.

The issue of how to deal with the period between when Israel leaves large swaths of the West Bank and the PA is able to take over control is likely to be discussed during talks President George W. Bush will hold in Jerusalem and in the PA on Wednesday and Thursday.

I can see it now.  NATO troops opening fire on settler kids building a caravan on a hilltop...(an obstacle to peace)...Terrorists shooting at NATO troops, Israel getting blamed.  Seems like a recipe for disaster...(and the troops in South Lebanon didn't prevent the shooting of Katyushas at Israel this morning)

To end off on an optimistic note (maybe?) see this amazing video of Israeli singer Shlomo Artzi singing a rather Chareidi rendition of Modeh Ani.  In 1995 he happened upon the recording of this song in the same recording company, different studio, where he was going to record his "secular" music.  Takes about a minute for his rendition to start...


Wherever I am, my blog turns towards Eretz Yisrael - טובה הארץ מאד מאד
Posted by Jameel @ The Muqata

Watchin Shlomo Artzi singing Modeh Ani with so much passion really touched me. It was beautifully done.

This is one reason I was realy drawn to Rav Kahane's works... because they were so fast to outlaw him.. didnt the yutzes in the government learn that the more you ban something, it creates a bigger appeal.

When Rav Kahane says "lets pay the arabs to leave" he gets charged with incitment etc... even though the arabs were questioned and said they were not offended!

When Barak says "lets pay the settlers to leave" all is kosher..

This sedition / incitment crap is beyond ridiculus! next time a leftist calls settlers nazi's he's getting charged ?

We all need to vote huckabee.. he said to make a pali state in saudi retardia...

A NATO force would be a dissaster.. settlers wont really fight the cops / soldiers head on.. sure we square off but we dont hit em..

A multi national force would be jelous of what the british got.. the one way to piss of settlers is by sticking a army of non jews here..

You will haver every religious zionist rabbi declare it a milchamat mitzvah..

I had 2 neighber's hy'd in the most elite commando units... thats the ones you know about.. there are MANY more..

Beautiful video! It's lovely to see a non-observant Jew respond so passionately to a religious song.

from an egged flier:

More like its eliyahu to anounce moshiach.. stupid israeli's.

Free speech is being killed, not squashed.
http://joesettler.blogspot.com/2008/01/democracy-flies-coop.html