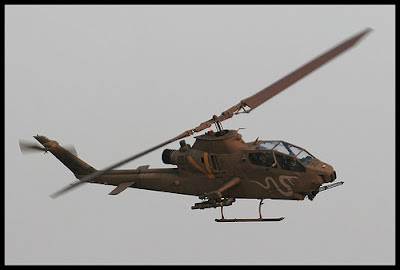 An Israel Air-force Cobra helicopter crashed last night around 6:30 PM in Northern Israel as a result of the tail rotor flying off the helicopter.

It was rather distressing hearing all the MDA volunteers responding trying to locate the pilots -- as ammunition exploded all over the places making it impossible to approach the crashed helicopter.

Two pilots died in the crash -- one of them was identified as Major (res.) Shai Danor, 35, a father of five from Rosh Ha'ayin. The other pilot's name has not been released for publication at the request of his family.

All IAF Cobras have been grounded till an investigation reveals why the rotor flew off.

Two years ago I dedicated my 9-11 post to the memory of Nancy Morgenstern, one of the victims. Go see it, it's worth reading.

In a poll for the University of Maryland, people were asked who they thought was behind the attack.

The poll, managed by the Program on International Policy Attitudes at the University of Maryland, of surveyed 16,063 people July 15 to Aug. 31. It has a margin of error of plus or minus 3-4 percent.

On IDF radio this morning, a professor from Tel Aviv University was asked about Islamic Fundamentalism and 9/11, and out of the blue, he started comparing "Noar HaGvaot" (hilltop youth) with Islamic fundamentalists. To his credit, the reporter was slightly incredulous that the interview had just made such a bizzare turn, and he said, "Noar HaGvaot have never done anything like this, how can you make such a comparison?!" The TAU professor replied, "they are very similar in their mindset, and I worry that 9-11 done by Al-Alqaida was only the beginning and that Jewish extremists like Noar HaGvaot will do the next [mega attack.]"

The hatred from Israeli's left knows no bounds -- and using 9-11 as a springboard to bash "Noar HaGvaot" and Israel's right wing is particularly offensive.
Wherever I am, my blog turns towards Eretz Yisrael טובה הארץ מאד מאד
Posted by Jameel @ The Muqata

Email ThisBlogThis!Share to TwitterShare to FacebookShare to Pinterest
Labels: 9/11

I knew Nancy Morgenstern. She was a warm, caring, happy person and her loss has devastated her family and friends.
Some scars never heal.

It is hard to believe that so much time has passed.

As far as that U of M poll is concerned, it was probably conducted by the Zogby organization on behalf of Shibley Telhami, both of whom are out to prove that it's American support for Israel that's behind all the hatred the Arab world for the U.S.

Telhami is the Anwar Sadat professor of Peace Studies at the U of M. (or some similar title.)

i was shocked about the comparison of that reporter.

on the other hand, i was also disturbed by what happened outside of talmon today.

I once participated in a panel woth Shibley chaired by Naomi Chazan before she went into politics, as head of the Truman Institute. I didn't think much of his intellect.

And you didn't get the name of the interviewee?

i'm beginning to think that all people on the left are exactly the same-israeli, american or otherwise.