Getting Tough: Israel Most Wanted 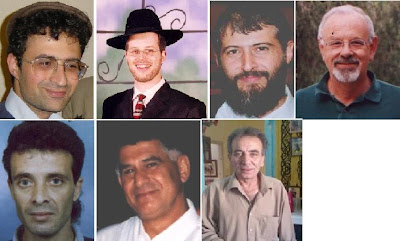 Have you seen these "men"?
All of these people shown above have one thing in common: they all refuse to give their wives a get, a religious divorce, leaving their wives stranded as agunot -- unable to remarry -- and these men have gone into hiding.

On the radio yesterday, I heard the interview of one woman as she bitterly explained her situation as an aguna. Surprisingly, (though very encouraging), when asked if she harbored any complaints against the Israeli Rabbinate, she alternatively praised their efforts to find her husband.

The Chief Rabbinate has gone on the offensive to help agunot, and is posting pictures on their website with descriptions of each individual recalcitrant husband; last know whereabouts, possible methods they used to change their appearances, and they provide the option to leave anonymous tips as to there where these people might be.

If you have seen any of them, PLEASE contact the Chief Rabbinate through their website (or email me and I'll send it to them).

The aguna on the radio asked for an additional minute on the radio station, to which the interviewer gladly granted. "The biggest problem is not the religious establishment -- I believe they are honestly doing their best to help me. The problem is the families of the men who help hide and protect them -- while our lives are held hostage [from remarrying]"

Do you know these people? Have you seen them? These moral and Jewish degenerates need to be found quickly, so their wives can be freed. If you've seen them, or have a clue where they are -- please contact the Israeli Chief Rabbinate via their website, their phone number 02-658-2822, or you can even contact the Israeli police (100). 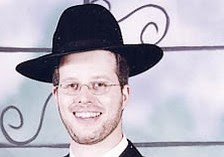 In particular, 33 year old son of Anglo immigrants to Israel, Meir Briskman has refused to grant his wife a divorce for the past five years -- and he may have fled Israel. He may live in your community! Have you seen him?

"From our experiences, we believe that refusing a get [divorce] is a social problem," said Rabbi Eliyah Ben-Dahan, director of the rabbinic courts. "If we reveal the identity in a public forum of those men who refuse to grant their wives a get‚ then he will stop being accepted in his immediate environment."

Ben-Dahan added that even if the man in question has gone into hiding, it is likely that his close family may know his whereabouts. Publishing the man's name will bring shame upon his family, he said, hopefully prompting them to come forward with information that will ultimately free the woman in question."

Robyn Shames, director of the International Coalition of Agunah Rights, said she welcomed the move. "I think it's fantastic - any move by the rabbinic courts to find men in an unwanted marriage should be applauded. Efforts need to be made to encourage society to change how they relate to men who refuse to give divorces - they should be treated just like men who violently abuse their wives, because it is a form of abuse." (JPOST)

Let's use the JBlogosphere to find this guy...and bring him to justice.

Additional sources (in Hebrew) NRG
Wherever I am, my blog turns towards Eretz Yisrael טובה הארץ מאד מאד
Posted by Jameel @ The Muqata

Email ThisBlogThis!Share to TwitterShare to FacebookShare to Pinterest
Labels: agunot, Briskman, divorce, get

Batya!
Give it a prominent place! This is an important issue and an important use of our 'community' (if there is one, etc.)

Risa: Just imagine if any of these men are located because of a blog post? That would sure prove the value of our community :)

Jameel. Once again I applaud you for bringing up the agunah issue (which i believe is terrible that there are men who would do this), but once again I think it needs to be mentioned that there are men in similar situations whose wives refuse to accept the get. Most people dont realize that eventhough it is halachikly permissible for a man to get remarried, d'rabbanon they cannot and are stuck in a similar situation as these agunot. yes, they can still have a child out of wedlock and that child wont be considered a mamzer, but for a man who keeps the mitzvot, thats not an option.

From personal experience, I can tell you that the rabbanut doesnt place any sanctions on a woman who refuses to accept a get and she still gets child support and even in some cases spousal support without a get.

Anyway, neither situation is ideal and Im glad to see that the rabbanut is at least trying to take action against these jerks (I will refrain from using stronger language)

I really want to wipe the smirk off that guy's face in the picture, don't you?

Kol hakavod, jameel. If i had a blog, i'd give a link to this post a prominent place. :D

Abbi: Yes, the look on his face deserves makes me want to smack him.

JCop: Once again, you are totally correct...this post wasn't meant to belittle the issue of women who refuse to accept a get from their husband. You can guest post that here if you wish!

I didnt think you were belittling it. Just wanted to poiint it out. I would guest post about it, but I already said everything I felt needed to be said.

I'll think about it tho... 2.5 years without posting makes it harder to write a full post.

Thank you for this post! I have been in these women's shoes myself. It took a few years and enormous social pressure to bring my sitation to an end. Families aiding and abetting is definitely a problem. Rabbeim who mean well, but don't push hard enough also comes into play. It is very comforting to see this matter being taken seriously!

It would be helpful if someone told the rabbinate that this page should have a mirror page in ENGLISH, because it's likely many of these men have traveled to the USA.

I don't understand why the Chief Rabbinate is only posting men who have "disappeared." Aren't there many cases where the husband refuses to grant a get and just lives in another community (as happens frequently in the US)? It is known where these individuals live but somehow their new communities don't know or seem to care about the agunot they left behind. Also, I don't see any age info posted for these men.

The situation of agunot makes me skeptical of "Torah Min HaShamayim".

If following laws (in this case Jewish marriage and divorce laws)can cause so much grief, what does that tell you about the lawmaker? If the lawmaker is a human, then you could just say "That person was an idiot." However, if the lawmaker is God, then you're compelled to say "Well, maybe this woman's grief is God's will and she just needs to suck it up."

You are probably thinking "The rabbis have remedies for agunot". Yeah, and doctors try to cure cancer. It doesn't mean they also spread cancer. The agunot are created because of following halacha.

Yochanan, if it weren't for the divisions and mutual hatred between different sectors of the Orthodox world, these men would not find acceptance in any Jewish community in the world.

In the long run, we have brought the agunah situation upon ourselves.

Well done Jameel! Thanks for doing this.

Chaim said... "...why...only...men who have "disappeared." Aren't there many cases where the husband refuses to grant a get and just lives in another community..."

The wife of a recalcitrant husband, who refuses to give his wife a get, but whose whereabouts are known, is a "mesurevet get."

Though her situation is also abominable, and I am in favor of publishing names of such husbands, legally and halachikally, she is in a better position. There are legal and social actions that may be taken against him. The fact that sanctions are rarely enforced is a travesty in and of itself. But those channels do exist.

For an agunah, the whereabouts of her husband are completely unknown and she is trapped with no chance of relief until her husband is located. I know someone whose husband literally disappeared off the face of this planet about ten years ago. He disappeared without a trace. It is possible that everthing about him, including his name, wasn't real to begin with.

Agunot or mesurevet get, either way it is unbearable.

Rivka makes a great point about the channels for helping a woman who is mesurevet get being used too rarely. I used to have to see the man who refused me a Get on the street each Shabbos. Knowing right where he is, but being unable to break free is painful & frustrating to out it mildly.

I will be linking to this!

Yochanan, why don't you ask the same question concerning the 3 mitzvot for which one is required to sacrifice one life for?

The comments about his face are just infantile and stupid. These people need to be found and brought to justice, but that is all! You have know idea what they are going through now, or when they were married.

It would be nice now if the State of Israel would start enforcing child support claims against American men instead of allowing us to starve.

I think that this a very complicated situation because as we we know, in Israel the men have a lot of wife, so, is difficult for women find a good husband or find her husband.

still looking for him??