The evacuation took place after contacts between the Coordination and Liaison Administration at Erez Crossing and Health Ministry representatives. The boy’s injury is related to the death of another boy of 15 who initially claimed that he was wounded by IDF forces. However, this claim was denied yesterday by the IDF spokesman who noted that the IDF was not operating in this area.

9:15 PM A 15 year old Palestinian teenager from Gaza has been transported to Israel for emergency medical treatment in an Israeli hospital. (Update: Kaplan Hospital in Rechovot)

The Arab teenager was seriously injured while preparing to launch a Palestinian Qassam rocket at Israeli civilians in Southern Israel, when the rocket suddenly malfunctioned and exploded.

The explosion took place in the Shuja'iyya district of Gaza city. 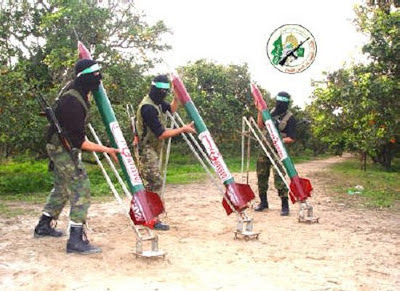 are they morons? at least make sure to jail the pere adam once healed!

COGAT is an anti-Israel body. It seems to think of itself as Israel's UNRWA for the Arabs.

Hoisted on his own petard