Though this idea has been around for a while, the US media has only now started reporting it.

Since 2010, a USA company entitled "JiHawg Ammunition" has been manufacturing bullets with "Porcine Coating" (Pattern Pending) based on the "highest quality pork product."


"According to the belief system of the radical Islamist becoming "unclean" during Jihad will prevent their attaining entrance into heaven.

Jihawg Ammo is a natural deterrent to radical and suicidal acts of violence.

We at Jihawg Ammo hope you will stock up on Jihawg as a natural deterrent to the ever growing threat of radical Islam and Sharia Law. We, however, stress that the nullifying principle of our product is only effective if you are attacked by an Islamist in Jihad. Otherwise, our ammo functions just like any other ammunition so we obviously insist upon defensive use of our ammo only-not offensive. (JiHawg.com)

For years there has been discussion that IDF elite units use this sort of ammunition, but we have not been able to confirm this via the IDF spokesman's office, and I assume they would deny it.


“With Jihawg Ammo, you don’t just kill an Islamist terrorist, you also send him to hell. That should give would-be martyrs something to think about before they launch an attack. If it ever becomes necessary to defend yourself and those around you our ammo works on two levels,” the company said in a press release earlier this month.

The company’s website bills the bullets as “Peace Through Pork” and a “peaceful and natural deterrent to radical Islam.” There’s a related line of apparel that feature slogans like “Put Some Ham in MoHAMed” and a target poster that says “Give Em a Spankin with some Bacon.”

“The nullifying principle of our product is only effective if you are attacked by an Islamist in Jihad,” the company’s website says. “Otherwise, our ammo functions just like any other ammunition, so we obviously insist upon defensive use of our ammo only-not offensive.” (HuffPo) 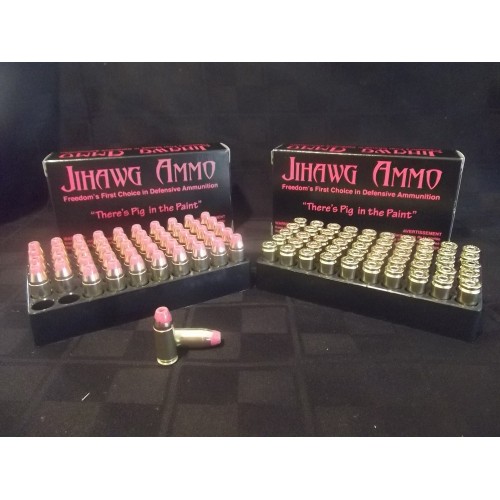 I doubt there would be any Kashruth issues with using these bullets, since a weapon's barrel gets so hot after it's been fired, that the barrel has effectively "kashered" itself after every shot.

Do you have to tovel after reloading your magazine? Are kohanim allowed using the ammo?

Is my calendar off? I though it was Tamuz, not Adar?

David: Its not adar material...these are real bullets...even if the tone of the post was less than Tammuz.

Hey you guys, there is no prohibition against benefit from pork products, just against eating them, unlike mixtures of milk and meat and several other very particular objects.

Thanks for your greatful informations, working in, ASIAN AFFAIRS MAGAZINE.

Middle East : Israel and Hamas shy away from peace talks

I see some disadvantages:

1. The risk of getting friendly-fire chazer in your butt.

2. The fact that getting shot with a trafedik bullet does not actually send you to hell, and I'm not sure that anyone except for maybe some very naive young kids from really remote places believe that it does.

4. The fact that the things are called "JiHAWG", which is too tacky for me to cope with readily. Also, I'm against encouraging the fetishization of pork in the fight against Islamists. I still recall the guy who posted online that he was going to celebrate Bin Laden's death with a 'cold beer and a Hebrew National pork hot dog'.

5. The fact that all it's going to take is an announcement by someone with good clerical credentials to announce that dying a martyr will override any negative effects of ballistic pork, and the advantage, if there ever was one, is, so to speak, shot.

6. Also, the possibility that Hamas will start rubbing bacon grease all over the Qassams, thus turning an at least marginally dignified conflict into a cross between the Marx Brothers and Kitchen Nightmares.

On a more serious note, this idea probably comes from people having read about the Sepoy Rebellion, but the issue there was having to bite the cartridges.

Leave this junk in Idaho.

This whole concept of punishing Muslims this way is disgusting and is a testament to why Israel and the United States are viewed so badly on an international scale. A much better method is to:
1. Not fuel anti-Israel and anti-US rhetoric with posts like this and
2. To fight back with logic and law, as can be done with the JCPA's new legal portal:

Truth is that the local Arabs in Israel's part of the M.E. are highly swinophobic as they fear being kept out of paradise if they should have the least contact with a pig or its by-products. Since they really believe this it SHOULD be used an incredible weapon against the crazies who want to slaughter Jews. And we don’t have to limit its application to bullets. We can paint lard on items that we don’t want Muslims to touch, like on Jewish children’s bicycles to prevent theft by Arabs. Lard should be applied to Jewish agricultural crops and irrigation equipment to dissuade the Muslims from stealing them. It can easily be used to remove all motivation by the Muslim extremists who want to slaughter Jews. Taint water cannons with lard, announce the fact that the water has a bit of emulsified lard in it beforehand, and that will quell a riot of Arabs before one can blink an eye. They’ll run from the site like spooked turkeys. Of course there are those westerners who think that it's too ridiculous because, after all, THEY wouldn't think like that, so why would any good Muslim or Arab? The answer lies in their mentality! This is an example of the difference between the west and the middle east in mentality. That's why they have their mentality and we westerners have ours. With that ill-logic they are encouraging us all to use 'logic' and 'reason' and 'law' when the Arab mentality has never used rational thought or law in their obsession of destroying Israel. Why continue to use a tool against the Arab Jew-haters that has never worked, not ever? So let’s use the ill-logic and un-reason of denying paradise to those Muslims who want it most and will murder Jews to get it. Take away paradise from the extremists and you remove their motivation for terror. It's that simple. All we gotta do is think outside the proverbial box. Then too, there are Jews who believe that if we ‘upset’ the Muslims then they’ll try to hurt us all the more. Well, with the power of pig we can make their afterlife far more unpleasant for them, by the simple application of more lard applied more liberally! After all, to the religious mind, the afterlife is far more important than this world, so deny them their afterlife and you deny them their reason for terror.

Friends, we have found the weak point in the Arab/Muslim mindset. Note the following to

Seville, Spain. A township governed by the left accepted to sell its land to a group of Muslims for the construction of a mosque. A group of non-immigrant Spaniards that didn’t want the mosque in their neighborhood came up with an original solution. In the middle of the lot where the mosque was supposed to be built, they buried a big pig and made sure it became public knowledge. Since Islamic law forbids the construction of mosques on hog-soiled land, the Arabs had to abandon the project. The Israelis have been using this strategy since 2004. They put containers of pork fat in all their buses and made sure everybody knew about it. If a suicide bomber decides to explode himself in a bus, he’s taking the chance that some of the pig fat ends up on his body and therefore he will not go to Paradise. Israelis buses have been safe from attacks since then. No more attacks.
http://my.telegraph.co.uk/thereturnofgl/grumpylarry/1291/how-to-stop-the-muslims-building-their-mosques/