Mr. Clean Returns to the Likud 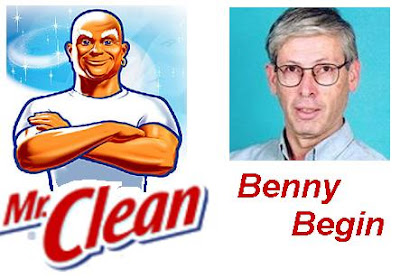 While Foreign Minister Tzippi Livni claims to have a monopoly on being the "Mrs Clean" of Israeli politics, Bibi Netanyahu has managed to embrace the ubiquitous Mr. Clean of the Israeli political landscape, Benny Beigin -- and he is re-joining the Likud for the upcoming Knesset elections.

A right winger of upstanding character, Mr. Begin is one of those rare politicians whose idealogy drives their poltical decsions. 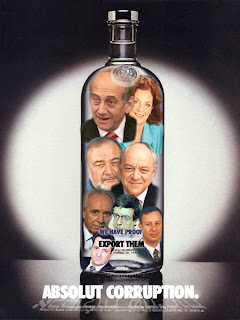 I'm sure Tzipi Livni isn't thrilled by this turn of events. (Why Jewish Agency chairman Zeev Bielski wants to join Kadima is beyond me)

Love the "Absolut" graphic-did you do that?

Raizy: Wish I could take credit...but it wasn't me. I got it so many times by email, I don't even know who to give the credit to.

i think that one of the reasons kadima STILL has a significant amount of support is the "one of us" reasoning. for so many in israel, unfortunately, the ultimate motive for nearly anything in life is how to make sure they will not turn out to be "frayers." kadima politicians have shown that they are the same.

only real solution i see is from the bottom up - education to respect rule of law and recognize participation in community --> fewer parties that would fit in nicely in zimbabwe.

Begin will get the core back to likud and it also will work best for moshe feiglin. You can accuse moshe of attempting to hiack likud, but begin you cant.

On the other hand, faced between begin and moshe, most of those that would have voted moshe in likud central cmte vs bibi would now vote begin.

Oh...wait....if I vote Likud, and Begin, does that mean I am stuck with Moshe Feiglin as well?