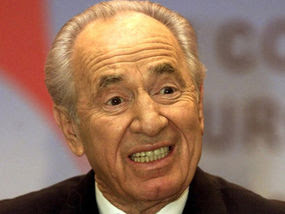 Yet another unfortunate political blunder for Israel's President, Shimon Peres.

President Peres was so overjoyed by the possibility of becoming an honorary British Knight Commander of the Order of Christians Saint Michael and Saint George, that Israeli officials breached protocol by leaking early discussions about the knighthood to the media, in an attempt to force the issue.

THE Queen has been drawn into an embarrassing diplomatic wrangle with Israel after Britain snubbed efforts to have the Jewish state’s President Shimon Peres knighted.

She will meet Mr Peres, the architect of several stalled Middle East peace plans, when he begins a three-day official visit to Britain on November 18.

But the Queen, on the advice of ministers, has rejected efforts by Israeli diplomats to secure an honorary knighthood for Mr Peres.

"It’s not going to happen. There is no knighthood," a British official told the Express.co.uk, only hours after Israeli diplomats indicated it was something that was still under discussion.

Reports in Israel said the Queen would make Mr Peres an honorary knight commander of the Order of St Michael and St George for his contribution to the Middle East peace process and to improve British-Israeli ties. Foreigners can be made knights but are not allowed to use the prefix Sir.

While it doesn't look like we'll be calling our President "Sir Peres" anytime in the near future, there are still openings for Knights of the Supreme Galactic Commander of the Universe, and for the Ultimate Holy Order of the Knights that say Ni.
Apparently, winning a Nobel Peace Prize with Yassir Arafat only goes so far.

It wouldn't be Sir Peres, but rather Sir Shimon.

Whilst I'm no fan of The Daily Express, tabloid, right-wing alarmist paper that it is, if the story is true, then I'm not surprised that any potential honorary knighthood has been revoked. The protocol in relation to such things is taken very seriously here in the UK, old-fashioned nation that we are.

By the way, whilst the Queen is the 'fount of honour' the names of the recipients are submitted by various organs of the government, and the Queen rarely, if ever, refuses the submissions. So, it's a political process (in relation to honours given to well-known people).

Is it just me, or aren't there any other pictures of Peres? That one is quite unsettling. Almost claymation like...

maybe he can be inducted into the Mystic Knights of the Sea
The "Mystic Knights of the Sea" as depicted in the pre-1943 serial version of "Amos 'n' Andy" were clearly intended as a Masonic parody. Charles J. Correll and Freeman F. Gosden were both Freemasons and Shriners, and consciously patterned the administrative structure of the Mystic Knights of the Sea after that of Freemasonry: Great Supreme Kingfish = Grand Master, Kingfish = Worshipful Master, Whale = Senior Warden, Mackerel = Junior Warden, Shad = Secretary/Treasurer, Jellyfish = Deacon, Swordfish = Tyler.
[IMG]http://i100.photobucket.com/albums/m16/yitzd/mystic_knights_of_the_sea_pic.jpg[/IMG]