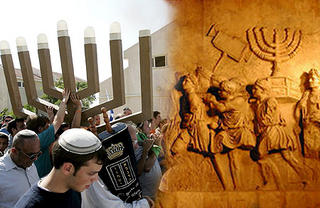 Israel has a new disengagment problem to worry about. Not one rabbi has given halachik permission for Israel to destroy the shuls in Gush Katif. The government and army are begging the rabbis, or any of them, to give some sort of halachik permissibility to tear them down.

The rabbis are saying that the shuls should be boarded and locked up, and international forces should watch the shuls. Otherwise, they claim what right does Israel have to tell the rest of the world not to destroy old shuls throughout Europe. There are thousands of shuls around the world today, with no minyan in them, yet they remain out of respect to Judaism. However, if Israel is able to destroy shuls in Gush Katif - how can they expect anyone else not to do the same?
Posted by Jameel @ The Muqata

Ben-Gurion must be kvelling.