Updates will now be running from the top of the blog: Go here 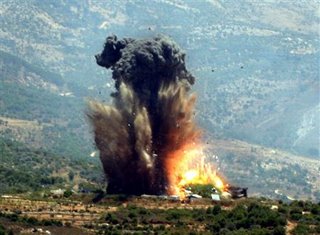 Responding to a serious Hizbolla attack on Israel's northern border, which involved the kidnapping of 2 IDF soldiers, and the subsequent critical wounding of 3 IDF soldiers and an additional 8 were hurt - IDF ground forces have entered South Lebanon combined with IAF warplanes targeting Lebanese targets.

An IDF tank was targeted by a bomb, and there are reported casulties there as well.

Update being recalled due to military censor.

Additional Update: Despite heavy IDF censorship concerning the reporting of the death of 8 IDF soldiers, including the tank crew, the news now appears on different websites, so I'm putting this post back up. My source was not military, but civilian, so I'm not that concerned. (I woudln't have posted a military news item)

Update: 2:00 PM. Foreign News services reporting the 2 kidnapped IDF soldiers are of Druze origin. (not that it should make a bit of difference!)

Update: 5:42 PM Hizbolla Katyusha rockets rain down on Western Galil near Meiron. So far, IDF confirms 3 deaths in attack this morning. No official confirmation yet as to the tank incident (and allegedly the tank crew was killed -- 4 soldiers). Total count could be 7 instead of 8.

Update: 9:13 PM Kiryat Shmona and other northern Israel communities ordered into bomb shelters. Official number of killed IDF soldiers stands at 7, plus 2 kidnapped soldiers (one Druze, one Jewish). Ongoing firefight into South Lebanon as Israel continues to attempt to extricate it's Merkava tank, and bodies of the tank crew. IDF has issued "tzav 8" emergency callup orders for IDF reservists. Hizbolla announces that it is proposing an immediate "cease-fire" so that Israel can start negotiating the return of the 2 soldiers, plus Gilad Shalit, -- in exchange for thousands of Palestinian terrorists. Hizbollah leader Nasralla warned that Israel will face sever consequences if they continue with a military offensive (note: Hizbolla has hundreds of long range rockets capable of hitting central Israel from their postitions in Lebanon)

I'll update this as information becomes available.
Updates will now be running from the top of the blog: Go here

they're not saying even 1 on any of the news sites?

ack. there goes hope for a hhizballah-free happy lebanon.

anonymous: I posted an additional link above.

anonymous: when the same story appears numerous times on rotter from different people, the likelihood goes up as to the accuracy of the report.

My reporting of the news came from a different source altogether, which has proven itself highly reliable in the past.

Think Ehud Olmert and the rest of his Kadima cronies have much to answer for. Is this good enough of a wake-up call?

What is going on now is simply unacceptable and the harshest reality of them all is that the powers that be aren't as top of things as they are supposed to be.

It looks like re-engagement. Let's pray for the welfare of our soldiers, and for the demise of this wicked government.

this will not change olmert's plans for convergence.

Anonymous said...
this will not change olmert's plans for convergence.

I asked a leftist friend in 1995, at the height of the bus explosion terror attacks, "How many buses need to blow up, before you admit that the Oslo process MAY have been a mistake?"

His answer; "There aren't enough buses in Israel."

precisely. we live in a society that is media driven and sharon's advisors caught on to this when he announced his disengagement plan. olmert inherited the same advisors who stand by their "admit no wrong" approach to governing. they also know that they have the implicit complicity of the media to not hilight the government's mistakes and push public discourse back to withdrawals whenever thee is a lull in the terror.

how long does the military censorhip usually last so that we can find out if the rumored 8 soldiers killed was erroneous or not?

So, is Syria trying to start an all-out war?

anonymous; By 8 PM at the latest, since the news stations will be clamoring to put the info on the nightly news.

However, the reports are starting to trickle out in the foreign press as to the accuracy of the reports. (see this one in English...)

I just found a report on the Washington Post website that confirms that 7 Israeli soldiers were killed - here's the link: http://www.washingtonpost.com/wp-dyn/content/article/2006/07/12/AR2006071200262.html

It sounds really bad. I just came back to the U.S. from Israel - wish I were still there....

Rebecca: I will keep updating the above post with additional news reports at they come in. Unfortunately, another one just hit my mobile phone. Updating now...

Isaac: No, I don't think it's Syria, but rather a coordinated effort between Iran, Hizbolla, and Hamas. Syria and Fatah will tag along for the party.

"the 2 kidnapped IDF soldiers are of Druze origin. (not that it should make a bit of difference!)"

As far as I am concerned, Israeli Druze (and any other Arabs who volunteer for IDF service) are of the haside umot ha-olam.

From a halakhic perspective, when in Israel prayers are offered on behalf of abducted soldiers, will the names of the Druze soldiers be included?

Hashem Yishmor aleinu v'al kol Yisrael. When will He decide that we've had enough...?

are they calling you up?

You're giving CNN a run for their money - except you're not anti-semitic.

Keep up the great work.

CNN briefly posted an alert that 7 soldiers were killed as announced by the IDF and then took it down.

I take it back, CNN is still reporting 7 dead. Jpost is also. Haaretz is not.

Haaretz is also currently reporting 7 soldiers as the current death toll in the the north.

the 7 is official. the army had a press conference at around 6 pm here. i was at the mall at the time. people weren't talking to each other. there was general silence. it was awful. i think so many people feel that we are in a one-sided war with the enemy attacking from all ends while our brave, powerful loyal army is not allowed to fight back. what an awful feeling. how have we gotten to this point?

Yes - it's officially 7, but I can understand why they thought it was 8 at the time.

One of the kidnapped soldiers is of Druze, the other Jewish.

Ari: In the past, when Druze soldiers were mentioned in official tefilot (and they are definitely mentioned), the name of the father is used, instead of the Jewish custom of using the mother's name.

Let the fire rain from the sky. Hit them hard, hit them often and let them remember that actions like this never happen without swift and severe retaliation. YAWP!

Thanks for the continuous update. : ( I sure hope that the administration is capable of protecting central Israel against those rockets.

How sick is that "not enough buses in Israel" ?! The left will never get it!

The problem with trying to "prove" anything to the left (or the right for that matter) is that no plan has ever been fully carried out for anyone to say it failed. You cant say Oslo failed, all we did was give them guns and partial control. Maybe if we would actually give them complete control of everything they want (All of Israel minus Tel Aviv, except the Yaffo part) then we would be at peace. Or so I would believe if I were a leftist.

Pretty much the entire upper western galilee was sent to bomb shelters at about 10:30.

The current status of kidnapped soldiers is:
2 Jewish

The bodies of the dead were so mangled that they couldn't tell who was killed and who was captured.

the jewish mother in me says "what did we ever do to deserve this?" while the hardcore zionist in me is screaming that we need to give these folks a serious tuchus-kicking.

hang in there, we're all davening for you and all of israel.

Other than pray (a lot!), what can those of us not in Israel do that would be useful?

thanks for the updates.

Jameel...1995 there was still hope, not to say his comment was anyway near appropriate. If the same person today said the same thing, then I would say they are living in a fantasy world.

I know that there are folks from beyond all the borders that truly want peace and to enjoy and respect each other as humans should, and we shouldn't stop trying reach out to each other, to understand more about each other, such as in Shifra's post about her hairdresser. I don't think we should give up on the hope of peace, but reality of security needs to be top priority. I disagree that giving up land and blaming the settler, religious or whomeever as being the cause of the roadblocks to peace. I think that's ridiculous, but I do think educational youth programs, conferences, exchange programs, etc are the way to true peace.

Trep mentioned today about blowing up Iranian cities. I have to admit I felt panic because I feared that one of my best friend's family members could possibly be killed. They are moslem and wonderful people whom I have had a chance to become very close with. Many of their friends and family feel don't share the hatred to Israel or Jews or care about it for that matter. So I can totally relate with those in Israel who understand and empathisize with those who are considered to be our 'enemy', but again, I don't have blinders on and do realize that these people are in the minority unfortunately, and the safety of Israel and it's fate of continuing to exist must come first.

Jameel:
"In the past, when Druze soldiers were mentioned in official tefilot (and they are definitely mentioned), the name of the father is used, instead of the Jewish custom of using the mother's name"

Do you have the name?

Good morning & a prayer for peace from me along with this:

sweettooth,
not to be inflammatory, but i don't think any amount of youth programs or exchanges can change anything. all of this hatred for israel and jews and the west comes from the home and is re-emphasized in the mosque and the schools. until the parents and religious leaders change their ways, the next generations are lost. this is unfortunate and unlikely to change.

BEC...change is slow of course, but it doesn't mean we discontinue trying. I look at Israelies today compared to 20 years ago, and maybe I am looking through a memory of a teenager back then, but I do see a change with the public and the views towards their middle eastern neighbors. Perhaps its because they have been able to travel more abroad and have been able to meet, socialize and exchange ideas and stories.

If anyone is around, CNN is carrying live news from Israel and Beirut right now.

A40 year old woman killed in Nahariya from a katyusha rocket

Fern: Other than pray - it's important to be pro-Israel on the blogosphere. Kofi Anan and the UN are already criticizing Israel, and it's only a metter of time before world public opinion is totally against Israel (as it was in 82) regardless that we're fighting for our survival.