Amazing "Save of the Day" on Simchat Torah 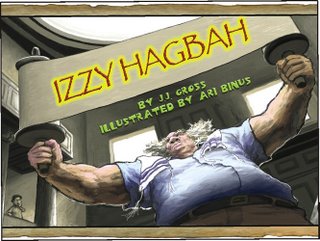 One of the common oddities of the levity of Simchat Torah, is that when it's time for Hagba, (Über-diqduq-geek pedantics like Steg, Lipman, and Mar Gavriel would probably insist on writing it Hagba'ha) -- instead of the usual Torah "lift and display", it's done backwards so that the words are facing away from the person doing Hagba.

In the shul I davened at as a kid, a group of guys would hold up numbered cards after each Hagba on Simchat Torah, giving their personal Olympic-style rating for the Hagba -- based on finesse, style, poise, and grace. An example would be something like:

However, this past Simchat Torah's minyan was different. I guess the guy doing Hagba had one drink too many during kiddush, and when he started his reverse Hagba, crossing his hands, and doing the "lift and display" -- something went horribly awry.
In slow motion, the shul watched as the left hand side of the Torah started to unroll, more and more, making this one of the widest hagba'ot every witnessed. The Torah scroll now started to sink and fall towards the floor.

Frozen in shock, the scene unfolded as no one in the shul could move; everyone was watching in horror, realizing that they may have to skip their lunch on Simchat Torah, and 30 more as well, as there is a month-long mandated fast for a "fallen Torah."

Two people reacted -- one of the largest people in shul moved faster than a speeding bullet. Coming out of left-field, this very large person scrambled with the gait of a gazelle, the grace of a figure skater, and the brute force of a Dallas Quarterback -- as he hurtled over the heads of people toward the bimah.

With only milliseconds to spare, this holy man, crashed through throngs of people at the bimah and grabbed the top handle of the Torah -- sheer milimeters before it hit the ground.

The slow-motion crescendos of "Noooooooooooooooooooo!!!" (say that slowly in your mind to get the full effect) that was the background to the seemingly slow-motion charge of the person running to catch the falling Torah, quickly switched back to real-time (Tivo users can use the "catch up to live" metaphor) -- and the shul erupted into a roaring cheer, congratulating "the man" who had saved the day! 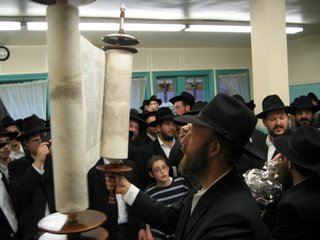 Regular Hagba being done, no special Simchat Torah theatrics here
Yet one other person reacted even faster than the "man" who saved the day -- an even larger individual who ran like the devil out the door of the shul. Jumping Jack Flash -- this guy was out in a split second -- so that he wouldn't be present at the "falling of a Sefer Torah"... and therefore, wouldn't have to fast.

I kid you not -- this story took place in our shul, and 3 different individuals insisted that I blog it for posterity. 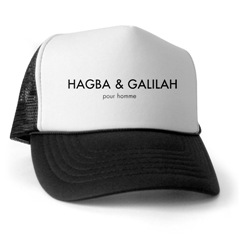 well that post had me on the edge of my seat!

That was kind of crummy of the guy who ran out of the shul instead of trying to keep the Torah from falling. I hope he at least gets some serious scowls next time he shows up at shul.

I just knew someone just had to make sure they were out of the shul if it happened.

Kol hakavod to mister number 1 for reacting so swiftly and my respects to number two for his quick thinking.
Say what you will but it's an intelligent course of action.
Glad you don't have to add a fast to the already long list of fastdays.

The kicker is that the 30-day fast thing is a myth!

And now for the joke:
Called for Hagba and after failing to get the Sefer Torah even as high as his shoulders before having to be helped back down, the poor incapable and weak Hagbah failure went to a gym for three months straight. He pumped. He benched (not after bread). He strained.

He returned with muscles bulging, calves tense and forearms mighty. At schule that Shabbat, and seeing his chance to make up for his misdeed, he grabbed the Sefer Torah and flipped it over, grabbing the two etzim gracefully; he then flipped the Sefer around while in its vertical position and as the gasps and applause broke out, especially from the Ezrat Nashim, he then turned the Sefer horizontally and let go of the upper etz and caught it all as it rolled up in his other hand. And then he sat down.

The schule was abuzz with excitement and then, the Gabbai leans over to him and whispers: "that voz reelly fantastik, Yankel, but you should know, we're only holding at Shisi".

I had a similar experience once, except I was the one doing Hagbah.

The person who was going to handle Galilah stood right behind me and as I turned around I tripped over their shoe.

Fortunately I was somehow able to maintain my balance and recovered from the incident.

I think this must happen on every shul on ST--expecially with that funky backwards hagbah.

Lately, they've been giving me a lot of hagbahs--yeah, right, me, the one with the bad back. Someone needs to tell these folk that tall doesn't equal strong.

I think Hagba should only be given to people who pump iron.

rabbi without a cause said...

It's no myth, although there's great dispute on the application. See Igros Moshe OC 3:3, Tzitz Eliezer 5:1 and Yechaveh Daas 4:56.

Jameel, that was priceless!

Your community has at least TWO quick thinkers. You have been blessed.

The synagogue I went to as a kid did it intelligently. Two people helped the hagbah raise the Sefer Torah.

This Kol Nidre, I was one of the lucky gents selected to hold a Sefer Torah. I never could figure out the most comfortable (that is, least straining) way to hold it--I ended up cradling it like a baby--and there were a couple of moments when I began to feel it slipping, and had to make a quick maneuver to stop the slippage. Nor did it help that the chazzan seemed to want to say Kol Nidre FOUR times instead of three....

Well, as for holding it, I almost dozed off during a Haftarah reading. And as for dozing, one of the Rabbanim here enthusiastically congratulated me after giving a Dvar Torah one Friday and suggested that I do it more often. Really?, I countered and his response - Of course, it's the only time I see you awake during the Dvar Torah period.

I have to give those wild-n-crazy Chabad guys credit for the most rational approach to hagba'ha I've seen in the Ashkenazic world. The Sefer Torah is lifted at the table, shown off, and then put right back on the table for dressing. Once you see it, you realize how silly it is to roll and dress a vertically held scroll. You can do a much more accurate job adjusting the roll when whole shebang it safely on a solid surface.

my cousin used to daven in a small shul in the basement of someone's house and when he went to lift the torah, he'd forgotten that the ceiling was lower than usual.
needless to say, it went through the ceiling.
but at least it wasn't dropped!

I think the twisting hands thing should be made asur..

The sefer torah is the holliest object we use and its no joke!!

Chabad for one will seriously whack you if you pull stunts with the torah..

what a hero!!! Great story Jameel.

BTW, from my personal analysis, hagbaha is not what it used to be. Torah scrolls used to be made from very heavy parchment and it would require a reasonable amount of strength to perform the hagbaha. In todays modern sifrei Torah, most are generally made form a light parchment and are fairly easy to perform hagbaha upon them.

It is not really a feat of strength anymore, rather one of balance.

I think the turn-around sefer torah hagbaha developed because most people are righties and it would be difficult to do hagbaha on a sefer Torah where all the weight of the heavy toah is on the left side. So they flipped it, placing the weight on the right side.

On todays light Torahs, there is not much of a reason for the flip, other than just to have some fun and keep "tradition", because even though the weight would be on the left (with no flip), the Torah is pretty light and is just a matter of adjusting the balance.

Just read this out loud to the family. Hubby was in hysterics, but the kids had a little trouble with the English idiom ;).

i don't insist on other people spelling things my way