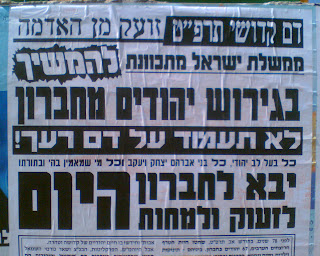 Over 30 soldiers from the elite "duchifat" IDF commando unit, have informed their commander that they will refuse orders to participate in the upcoming expulsion of 2 Jewish families from their homes in Hevron. (Update @ 2:06 PM: the number has risen to almost SIXTY!)

One soldier's father said on the radio (Army Radio, Galei Tzahal) this morning; "My son was trained to be a sniper, he was trained to ambush the enemy. It is not his job to kick Jews out of their homes from Me'arat HaMachpelah. [in Hevron]"

After hearing it reported live, on the radio, I found it here on YNET:

Thirty yeshiva students serving in the IDF have announced that they will not take part in the evacuation of two Jewish families from the Hebron wholesale market after consulting their rabbis.

The story was first reported by Army Radio. The soldiers, from the Kfir Brigade's Duchifat battalion, were slated to replace a Border Guard force on Tuesday and take part in the forced evacuation.

Following their protest, their commanders sat with them and explained the importance of the mission. The potential "refusniks" were also told that those who will not carry out the mission will be treated severely by the army.

IDF officials clarified that the soldiers have so far not declared that they will not get on the buses to the Hebron market and are continuing their regular training.

Meanwhile, a special fund headed by an American millionaire has spread the word among troops in Hebron that a soldier who will refuse an evacuation order will receive a financial award of hundreds of dollars. If a soldier is tried over refusing an order he could receive $600.

UPDATE: Forget the above -- this is MUCH better (new comments from the families of the soldiers)

Meanwhile, however, family members of some of the soldiers arrived at the Bekaot army base and threatened to block the buses. One of the signs they prepared read, "My son, don't expel."

We came here to say: If they want to evacuate Jews they should send the police or the Yasam unit, rather than IDF soldiers," said Tomer, one of the soldiers' brother.

"My brother and his friends were sent to replace Border Guard officers to evacuate Jews, and this is definitely helping evacuation. This is not a suitable mission for an army which is supposed to defend the State of Israel. The army should not be a partner to the expulsion of Jews from the city of our forefathers, and we are here to help our brothers from Hebron," he told Ynet.

The brother, who fought in Lebanon last summer, explained, "I did not refuse an order then because it was defending the State of Israel. Then they also knew how to recruit yeshiva students because they needed manpower, because the other guys were sitting in Azrieli (Tel Aviv shopping mall) – those sons of important people, who don’t even know how to hold weapons."

He added angrily, "I did not see an Arab father or an Arab woman evacuated from a mosque, but I did see a Jew expel a Jews from a synagogue."

His father claimed that the army had lied to his son and their friends when it did not tell them about the mission's objective.

"They were told to prepare a field package. It wasn't real. The army is lying shamelessly. Our children did not take a snipers' course in order to evacuate Jews from Hebron," he said.

It's no wonder that the IDF performed so poorly last summer; instead of concentrating on training to win wars against our enemies, the political echelons are abusing the IDF to expel Jews from their homes in Gush Katif...and now in Hebron.

There's an Israeli police force that's trained to evict people from their homes...using the IDF is more proof of the idiocy of Israel's leadership. Our leaders are truly pathetic; instead of Defense Minister Ehud Barak using his head, and try to retain some level of unity in the IDF, he uses commando units from yeshivot to help further his political agenda of throwing Jews out of their homes in Hevron. The police is an option...but he uses the IDF.

Don't get me wrong; I think the wording of the prayer for the safety for IDF soldiers is perfect:

May Hashem who blessed our forefathers, bless the soldiers of the Israel Defense Forces, who stand guard over our land and the cities of our G-d.

It's the soldiers who deserve G-d's blessing and protection, when they are doing the job of protecting our land.

I will continue to stand for this prayer every week.

Sorry to burst the bubble, but the army has flipped it's diskette - it's time for us to flip ours. the army is now a post-modern army that will be called upon in the service of the political echelons to perform all sorts of tasks - and occassionally fight a war. We should be telling our children to do their paza"m and get out. forget about elite units - it will lead nowhere.
see more here http://benbayit.blogspot.com/2007/08/idf-is-political-tool-in-hands-of-non.html

It's pretty sick, what they're telling the Army to do.

I think the government needs to read that prayer you quoted, and understand it.

These soldiers did a brave thing.

I recall that, not too long ago, some person or organization tried to add the security police to the printed text of the above prayer for the armed forces. At the time, the security police had already gotten into the eviction of Jews business, so I purposely didn't say the new phrase.

No words about Olmert. He's destroying the country through his thoughtless action. I understand that the army is there to listen to commands of their higher officers, and not to question orders, with some exceptions... but using this to cause strife and disunity is just terrible. And IDF aside, I don't understand what the rest of people are doing if they disagree with Olmert's decision. Where are the mass demonstrations of the dissenters in front of the Knesset? Maybe they wouldn't change anything, but at least they'd make clear what a significant portion of the population, not just a few "extremists", actually think. : (

avraham avinu has a wifi.. come live blog! btw i'll dms you updtes unless i get my head smashed!

When will someone get rid of Olmert????

For the sake of accuracy duchifat is a regular infantry unit, not "elite commandos." Not that they deserve any less respect because of that, of course.

Natan: For the sake of accuracy, Razi Barka'i, the radio show host on Galei Tzahal who "broke" the story said specifically that "duchifat" was a "yechida muvcheret."

They aren't sayeret matkal, but they are an elite infantry combat unit.

if that's what he said, then he's wrong. There's no gibush for duhchifat.

They're just like the gdudim in golani, givati and nahal except that they stay in the same gizra in judea & samaria. Gdud hir lekol davar.

Uh, when did they drop the gibush? I remember spending a day running around with a jerry can as my canteen , carrying each other around on allonkot and trying to assemble tents without tentsteaks among other fun activities... granted it's been 16 years since I was in Duchifat.