Hillary Clinton -- Get out of my bedroom! 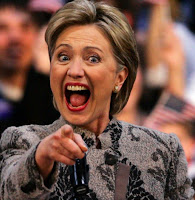 Since my last post drew the ire from commenters on the veracity of an IDF radio report I'll have to put some of this in quotes with a look-up-able hyperlink. [It's all from Haaretz today]

US Secretary of State, Hillary Clinton has adopted the hardest line to date against Jewish settlement growth of any US government.

Speaking on "Al Jazeera" (how convenient and sycophantic) she firmly stated US President Obama's policy:

"We want to see a stop to settlement construction - additions, natural growth, any kind of settlement activity - that is what the president has called for"

Since when does one country interfere with another's natural growth? Who does Obama and Hillary think they are?

I'm reminded of the decrees of Pharaoh in Egypt millennia ago, who demanded the cessation of Jewish births, and decreed that all Jewish male babies had to be thrown into the Nile River.

Even Israel's President Shimon Peres (who I am not a great fan of) told Obama when they met 2 weeks ago, that "these [natural growth settler] children are not going to live on the roofs"

We need to expand our communities!

Israel's embassy stated in response to Clinton's decree: Israel would stand by its pledge not to establish new settlements but as Israel sees it, this clearly does not include construction of housing to accommodate natural increases.

In the words of the commenter on the previous thread:

"Im appaled and disgusted the Jameel put this baseless garbage on his blog and embaressed that the predictable Barak Bashers jumped on board without any self reflection. Im also disgusted to see so many of you acting like weak ghetto Jews. Obama is the president of America, not Israel. He has neither the power not the authority to "make" Israel do anything."

Well then Mr. Anonymous Commenter, if Obama and Hillary don't have the "authority" to do anything, why are they demanding that Jews to stop natural settlement growth?

I guess Obama didn't pay that much attention when he celebrated the "Passover seder" this year, because he missed the line from Shmot/Exodus 1:12: "But the more they [the Jews] were oppressed, the more they multiplied."

With or without Hillary Clinton and Barak Obama.

Jameel, where does the US get off treating Israel like a colonial outpost with that kind of insulting and mendacious language? Where Jews live in Israel is NONE of Barak Obama's and Hillary Clinton's business. Whether they choose to have children is NONE of their business either. Such a call for apartheid/ethnic redlining wouldn't be permitted in the US. Jews are to be banned from living in Judea and Samaria for one and one reason only: they are Jews.

Its sickening! As Debbie Schlussel wrote on her blog a few days ago, Jews are not to be allowed there. At least the dogs are now.

Maybe the Amerikanskis would all be happy if the 'natural growth' were to take place in the sea, or something. Like in an Octopus's Garden. Oh how happy they would be.

This is what happens when hippies take over the world.

Thank you for flatly mentioning that it's OBAMA's policy, & that she is just the mouthpiece. It is unfair to shoot the messenger.

Iron Chef: In this case, she's more than just a messenger since she agrees with the policy.

Besides, as you wrote - I mentioned both Hillary and Obama.