You've probably never heard of Zvi Narkiss, but he has left his mark all over modern Israel's printed and digital landscape.

Zvi Narkiss was the graphic designer who created popular Hebrew "fonts" -- and they are named as part of the "Narkiss font family."

Zvi Narkiss, a senior Israeli graphic artists, passed away yesterday (Sunday) at the age of 89. Narkiss, a native of Romania, moved to Israel in 1944 and dedicated his entire adult life to Hebrew letters, design books and newspapers. Narkiss graduated from the Bezalel school of the arts shortly after he immigrated to Israel, and for years raised generations of graphic artists. In 1955, he opened a design studio focused on designing posters and illustrations. 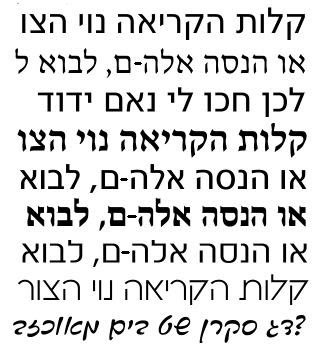 For years he struggled against various publishers who violated the copyright on his letters and fonts, using similar letters without his permission.

One of them is "Ariel", developed, marketed and distributed in the country without his permission. Only after many years of struggle was a compromise reached, and Narkiss received credit for creating the letters.

He contributed significantly to advancing the status of designers and maintenance of their rights, especially in the digital age, which breached the copyright of designers working on many fonts.

He is survived by two daughters, grandchildren and great-grandchildren. His funeral will take place today (Monday) afternoon in the cemetery of Kibbutz Nachshon, where his daughter lives, Tamar Narkiss - Gal.

Darn, I always wondered who to ask regarding the letter "chet" in Hebrew fonts vs the font of the Torah.

Now I know who to ask, but he is no longer with us.

What's your question? I can probably answer it.

In the torah, all the "Chets" (8th letter of the alephbet) look like two zayins with a small carrot connecting them. In all modern Hebrew fonts, even the ones that simulate the Ashyri Torah font, the Chet looks like your basic block chet.

edit: I just did a google search and I see that now there are Torah fonts with the proper chet. But 5 years ago, when I was doing a project on this, they were not so prevalent.

I think you mean caret, ^. Also, in some versions (Chassidic), it's vav-zayin. And in Sephardic and Yemenite, it looks just like a regular chet.

Eventually, the heh became distinguished by separating its left leg from the rest of the letter, probably continuing on from the extension. There was no longer a need to distinguish the chet, but the line continued in some versions of STaM writings by adding the caret on the top, in the middle, and, perhaps to make it more noticeable, splitting the top of the letter.

And if your question is, why don't fonts reflect this, it's probably simply because most Jews wouldn't recognize it. Non-Ashkenazim would never have seen it; nor would secular Jews, Orthodox women, etc. There are other examples like this: A wine store in my neighborhood has its name in Rashi letters- except it uses a Rashi mem where it should use samekh, because they difference there is exactly the opposite of the regular font. Also, they use a regular (STaM, actually) shin in place of the Rashi shin, which looks nothing like a regular one (although it's obviously derived from it). Again, this is simply because many Jews have no idea what Rashi script is.

Would it be safe to say then that this image of a sephardic torah scroll actually is not Sephardic?


I noticed that the Rhodes torah from the 1600s has the "chet" that we all recognize. Very interesting.

Thanks for the answer.

No, that doesn't look very Sephardic. The whole shape of the letter is different for Sepharadim. They probably mean "Nusach Sephard," i.e., Chassidic, but even that's not correct- the site seems to confuse the two. (The traditional terms are "Bet Yosef" and "Ari" for the two Ashkenazi versions; neither is really accurate.)

That said, there are many Sephardi scripts, on the one hand; on the other, Jews are in so much contact with each other that there's a certain amount of mixing of traditions and, among Ashkenazim at least, writing has become very standardized and cookie-cutter.