LATEST UPDATES AT TOP OF POST. Updates on Muqata Twitter.
Celebrations in Gaza (popular support of the people) 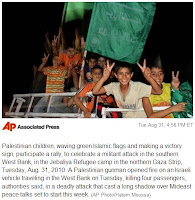 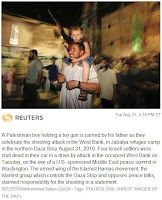 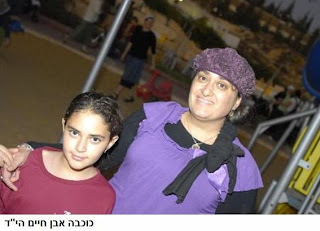 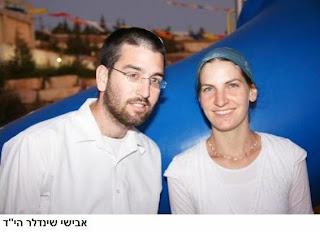 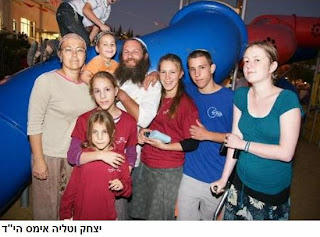 
-
Boilerplate condemnations from Palestinian Authority:
Prime Minister Salam Fayyad said "the attack was in contradiction with the national interests of the Palestinians and the PA's strategic vision".

Palestinian Authority President Mahmoud Abbas said "condemns all acts that target Palestinian and Israeli civilians." and the attack in the Hebron attack was designed to "disrupt the peace process. and can't be regarded as an act of resistance."

Not one word from them that it was actually terror and morally wrong.

By the way, anyone see any Palestinian civilians murdered by terrorists last night that Abbas is condemning that act?

One of the victims (Shindler) was originally from Elad. He moved to Beit Chagai after he recently got married.
-
ZAKA volunteer who went to the terror attack to assist, discovered that his wife was one of the murdered victims.
-
Hamas says that this is the first in a series of attacks.
-

Ehud Barak: "The terrorists wanted to hurt our government's policies" (sounds like a variation of "the price of peace" and "victims of peace").

9: 20 PM. Just received an update from a participant in an IDF spokesman's conference call regarding the attack (thanks S who was stood in for us during the meeting which we couldn't participate in).

Conflicting reports from the IDF.

IDF spokesman says there were no specific alerts, despite peace talks, and this entire road was clear of roadblocks and checkpoints.

Yet, Channel 1 TV reports that Chief of Staff Gen. Ashkenazi was in Judea/Samaria command headquarters this past Sunday, and warned all commanders that this region was "on fire" due to peace talks and Islamic Jihad and Hamas wanting to derail talks.

Security is raised throughout country in concern for a 'wave of terror' attacks due to "peace talks".

Meanwhile, reports are that the terrorists are still in the field.
-

IDF has captured 3 suspected terrorists, but new reports say they aren't sure these are the terrorists. UPDATE: Not the right terrorists.
-
The terrorists shot up the car. When the car stopped, the terrorists approached the vehicle and individually shot each victim to "confirm their kill".
-
4 people were just killed in a car by Palestinian terrorists. 1 of the dead includes a pregnant woman. 2 men, 2 women, ages 25 and 40. They were residents of Beit Hagai.
-

Now, would Netayahu be smart, he would end tonight the freeze and begin tomorow building everywhere.
That's the jewish answer to terror : to build.

For information, Beit Hagai, the yishuv where they come from has been created in memory of three students of the Nir Yeshiva of Kiryat Arba, Hanan Krauthammer zal, Gershon Klein zal, and Yaakov Zimmerman zal, who where murdered by terrorist in 1980 ("Hagai" is the acronym of their names).

According to this report, the license for a personal revolver of one of the people in the car was rescinded for an unclear reason
http://www.inn.co.il/News/News.aspx/208722

No peace with any Palestinians.
Netanyahu is playing a cynically stupid game just to appease Obama, who is an inept jerk, or, Bibi has attained the arrogance of every other leader who thought they were THE ONE" to fix the problems of the Mideast.

Arabs regard it as heroic to kill unarmed Jews and pregnant women.

And we are expected to understand their frustration at the Jews' not being nice enough to them!

For being too nice to the Arabs, two Jewish families paid with their lives and Israel's government will do nothing to change policies that led to today's bloodbath.

Is the IDF spokesman joking or oblivious.

Why was this entire stretch of road clear of checkpoints and roadblocks?

For "peace" that they open and close like a water faucet?

I added this post on the incorrect thread, so placing it here.

Thoughts with you all in Israel from the UK. x

There's been another shooting. 2 injured, one critically, near Kochav Yaakov I think.