This is rich. I found this website a few weeks ago about an Orthodox Jewish Private Investigator...

"T.O.T. private investigation & Consulting is a full-service, bonded New York private Investigation firm that has been conducting professional Investigations and surveillance worldwide for over 14 years. We Specialize in the Jewish orthodox communities, using only highly Trained professional male and female investigators (Jewish or Non-Jewish)."

I was sent this moments ago from their blog/website. Hat-tip: DF 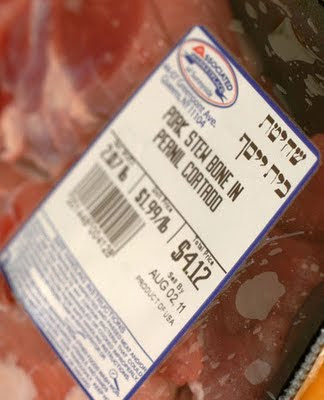 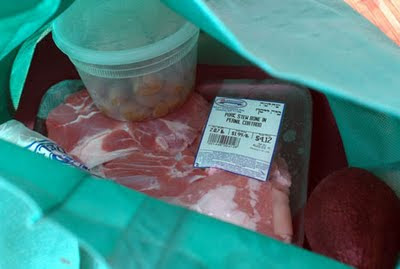 Rabbis saw to it long ago that it’s against the law to have a pig farm on Jewish-owned land in Israel, so Jewish pig-farmers there (perhaps after consulting a legal-loophole-minded rabbi of their own) built their sties on platforms above the land—taking the practice of raising pigs to a whole new level.

But if you want actual Kosher pork—pork spare ribs, pork cutlets, center-cut pork chops, all labeled in Hebrew “Sh’Chita K’shera Beit Yosef” (i.e., kosher)—you get that only in New York, only at the Associated Supermarket at 4407 Greenpoint Avenue, in Sunnyside, Queens, and only for a few hours today, between the time the Israeli artist Oded Hirsch snapped the above photo on his cell phone and it got forwarded to me, and the time I phoned Aris Duran, the supermarket manager, for an explanation.

“What are you saying?” Duran asked. “Pork cannot be kosher.” So I e-mailed him the photo. He called me right back, and said he was going to pull all the meat off the shelves. “It was a mistake,” he said, and a few seconds later he called back and left a message to say, “Thanks for alerting me.”

Duran had to leave a message because I was on the other line to the Orthodox Union, whose voice-mail recording describes it as “the global leader in Kosher supervision and the world’s largest Jewish resource.” (So much for the Torah and the Talmud.) I pressed two for matters Kosher, and listened to another menu until I heard: “To report a product that may be mistakenly labelled, press four.” I did, and was invited to leave a message for Howard Katzenstein, who called me right back.

“I have to tell you,” he told me, “my father-in-law read your magazine religiously—or some would say irreligiously. How can I help you?” I told him about the kosher pork for sale in Sunnyside. “If the price is right, I say go with it, right?” Katzenstein said, and giggled.

But seriously, Katzenstein told me, he hears of such outrages only “rarely.” “Computer-generated labels,” he said, “they’re a nightmare waiting to happen.” The last two words of the stamp on the pork in Queens, “Beit Yusef,” mean “according to Sephardic custom,” said Katzenstein, an Ashkenazi Jew. “But I don’t think even the Sephardim would accept that.” more here at the TOT blog

Glad this came out before the 9 days starts...

To be fair it doesn't actually say the word "Kosher" anywhere. (not that I can tell at least)

My suggestion to anyone who is truly serious about eating Kosher food is to cut out meat altogether. Too many cases like this one to count. Essentially your relying on someone's word that the schchita was done strictly according to Halacha. There's just too much room for mistakes/corruption/dishonesty, especially in the US where Kosher slaughter houses are collocated together with non-kosher ones. I haven't eaten meat ever since the Shalom Rubashkin fiasco. I wonder if the food they feed him in Federal prison is really kosher ?

My suggestion to anyone who is truly serious about eating Kosher food is to cut out meat altogether.

You'd do much better to cut out visits to restaurants of any sort, meat or dairy. Factories have standardized procedures and usually little can go wrong. Restaurants can go buy ingredients from the nearby supermarket and the mashgiach won't always be able to catch it. Yes, I once worked as a mashgiach.

Essentially your relying on someone's word that the schchita was done strictly according to Halacha.

To add a tiny bit of humor ...
It says somewhere in the Gemorah that after Moshiach arrives the hazer will become kosher. Either he will begin to chew the cud, or something else. Maybe Moshiach is here and we don't see him? :-)

Let's be real honest, this misleading package was not in a kosher market, but rather a traditional market. It is a shame because this could have confused an indigent person who was looking for cheap kosher products.

Anyone who buys at a kosher market would not expect pork at all, even with an misleading kosher symbol.

"I haven't eaten meat ever since the Shalom Rubashkin fiasco. I wonder if the food they feed him in Federal prison is really kosher ?"

What does the Rubashkin "Fiasco" have to do with Kashrus?

"My suggestion to anyone who is truly serious about eating Kosher food is to cut out meat altogether."

Based on my time working as a mashgiach I would say cut out all commercially processed food if you truly want to keep Kosher.

When I was still working at the Indian restaurant, the owner wrote a lovely flyer. Which I didn't see until he had an entire case printed up.

I tried pointing out to him that the only way his kitchen could be kashered was by setting fire to it.
Libun chamur, because of the stainless steel surfaces and utensils.

It fell on deaf ears, as he continued to assume that kosher was just another weird non-Hindu version of ritual purity.

One of his sons finally solved the problem by causing the box of flyers to "disappear", and the text file on the computer to also disappear.

The rav who gave a kashrus shiur I took says that the halachically relevant question is whether food is objectively kosher or non-kosher, but whether the food is permitted or prohibited. The halacha allows you to rely on the kashrus of foods under certain circumstances, and if you're permitted to rely on the kashrus it doesn't matter if, objectively, the food has a problem. As an example, we are permitted to assume that certain blemishes that make an animal unkosher do not exist in any given animal because they are not common. Slaughtered animals are not even inspected for such blemishes. Although many animals we eat might actually have such blemishes, those who eat them have done nothing halachically wrong because they have followed the halacha. Similarly, if we are halachically permitted to rely on a reliable supervision in order to eat food, then the fact that something slips past the mashgiach on occassion does not halahically prohibit the food.

In Israel, pork has long been euphemistically named the other "white meat." Pork is not fit for consumption under halacha but all the other parts of the pig can be used with no religious objection, whether in leather or in parts such as heart valves.

Moshe, your comment was very good. That is something I had not thought of till now. Thank you.

“But I don’t think even the Sephardim would accept that.”

That's a nice thing to say...
Very Jewish of him. Like kosher pork.

Actually, this meat should be sold to Bnei Noah, as they are also not allowed to eat eiver min hahai but can eat pork. A good sh’chita would remove the eiver min hahai problem that most non-kosher slaughter has – they hit the cow with a bolt to the brain then start cutting it up while it is still halachically alive.

Personally, I would look for grass fed beef (free range). The animals enjoy much better conditions, and are healthier – they do not need antibiotics and are more likely to be glat. Grass fed is also lower in fat.