Racism vs. Expression of Political Freedom

This past week, a left-winger I know tried to explain to me the dangers of Israel's newly legislated "anti-boycott" law. I asked how come it was perfectly legal, democratic, and acceptable for left-wingers to boycott produce from the settlements, yet it was illegal, undemocratic, and unacceptable for Jews to not rent homes to Arabs in Tzfat, who are harassing their Jewish neighbors.

The answer I received is that not renting homes to Arabs is racist, yet boycotting produce from settlements is an "expression of political freedom."

I don't understand why when left wingers boycott Jews from the settlements, and its called "political freedom" (after all, the expressly do NOT boycott from Arabs in the West Bank), yet refusing to rent your home to an Arab in Tzfat is considered racism. 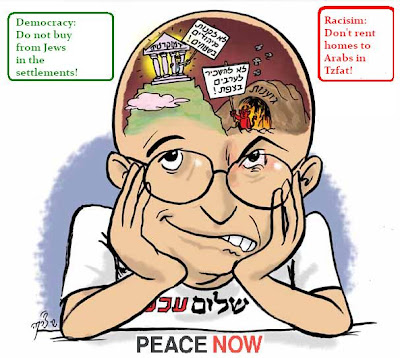 Actually, the people hurt most by the left's boycott of settler produce, are Palestinian workers from the Palestinian Authority who are the primary employees.

At first I though that "Expression of Political Freedom" must be some sort of a code word for "stab Jews in the back" -- instead, I realize its just "stab everyone in the back."

Gilad Evron, a "noteworthy" leftist was shocked and appalled to learn that his spacious home in Tel Aviv-Yaffo, 15a HaTzadaf Street used to belong to an Arab family prior to their running away (or eviction) in 1948.

Evron did something far more noble.

The Home of the Khalil Family,
Bashir Al-Bitar,
till 1948. 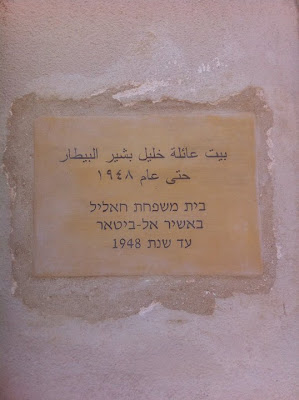 As he and his fellow left wingers call on boycotts of settlement produce and call for the removal of all Jews from the territories, we can all be proud that Evron has done the right, non-hypocritical thing, and placed a sign on his home.

N.B.: The JPost has a good Op-Ed piece today about the anti-boycott law; how today’s champions of free speech are yesterday’s censors. More insidiously, Israel is held to a standard never applied to the rest of the universe, and Israel is criticized for passing laws that are well within the western democratic mainstream.

Jameel, not renting to arabs is the equivalent of not allowing them to purchase goods in your store or food in your restaurant, boycotting is choosing not to buy from them.
Sorry, but its just not a 0ne-to-One comparison.
I would be fine with the boycott law if they amended it to apply only to bidding for government contracts, and losing tax benefits. But being able ot sue someone for not buying from you just rubs me the wrong way.
Again, I am moving to the shomron and am not a leftist by any standards.

Avraham: Why is it racist to say you are in favor of "Avoda Ivrit", (which is basically, boycotting Arabs), yet it is not racist to boycott Jewish produce from settlements?

(And I didn't say you were leftist by any standard :-)

I think it is racist to boycott Jewish produce from the settlements, but it is a much more passive form of racism and should therefore not be subject to lawsuits.
Not renting or not hiring arabs is still a more active form of descrimination and should be illegal in a democracy.
Sorry for the preemptive defensiveness.

Avraham: What if you consider the Arabs to be a security risk?

In principle, you should be able to say both. Where you run ashore practically is that "don't sell/rent/employ Israeli Arabs" seems to cut a lot closer to calling for racism. You're not boycotting actions, but identities. In theory, when I boycott settlements, I'm not boycotting Jews, but boycotting Jews who are doing a certain thing, i.e. working in the settlements.

Now, of course, you could respond by saying that when you refuse to rent homes to Arabs in Haifa or whatever, you're not boycotting Arabs per se, but merely Arabs who want to live or work in Haifa.

There are two problems with this, neither of which do I think you'll particularly like. First, more mushily, most people in the world recognize that if some citizens of Israel should be allowed to live ina given place (e.g. Haifa), then all citizens should have that same right. Calling for some citizens to be denied that right based on ethnicity is hate speech. Whereas, most people do not consider the West Bank or wherever to be Israeli territory, and therefore all Israelis should have no real rights to be there. So if I call for all Israelis to not be allowed there, that's not so much racist. If we're speaking on principle then, yes, Israeli Arabs should not be allowed to live there, either.

Second, what lends more weight to the idea that you're boycotting Arabs qua Arabs is that there's nothing they can do rent that house. Meaning, if Ahava wants to sell skin cream, per boycotters, they may, just not from the West Bank. They can move their operations somewhere else in Israel. The remedy is pretty straightforward, if expensive. But what's an Israeli Arab to do? You're boycotting his presence, while Arab, in Haifa. He can't become not-Arab. So, move somewhere else! But, that's the whole point. What he wants to do is live in Haifa. Telling him he can only live in Haifa so long as he agrees not to live in Haifa is, of course, non-sensical.

Vox: Thanks for commenting...will reply in the AM. (off the bed now).

>More insidiously, Israel is held to a standard never applied to the rest of the universe, and Israel is criticized for passing laws that are well within the western democratic mainstream.

For the reasons that I went over with Joe at length, I don't think this is true. And the legislative advisor to the Knesset also seemed to think this was not true.

- sorry- the previous comment was from the "Left Winger You Know."

(Although "echo chamber" was right about how attempting to conduct a serious political debate on the Muqata is a waste of time.)

Vox Populi and I, for instance have had a number of deep discussions here on this blog on a number of subjects over the past year. In fact, a number of Leftists have debated with Jameel and me here on quite a number of occasions.

That neither side has managed to convince the other that they are right, and that we may continue to dislike the other's worldviews and interpretations is irrelevant, but there has most definitely been serious political debate and discussion going on on this blog.

On the other hand, then there are commenters coming here. Making pronouncements (such as echo chamber, preaching to the choir, or no serious political debate). Passing judgement (because they can't convince anyone but themselves). And just generally trolling.

Just because you can't convince someone that your wrong opinion is right, does not mean that serious debate is not happening here.

Keep dreaming that the words "JoeSettler and "Serious Political Debate" will appear in the same sentence. We all know you can't handle it.

this is my grand father name, khalil bashir albitar, and he was living in yafa before, could be this house his