What does the New York Mets baseball team have to do with Arab or Leftist pressure? 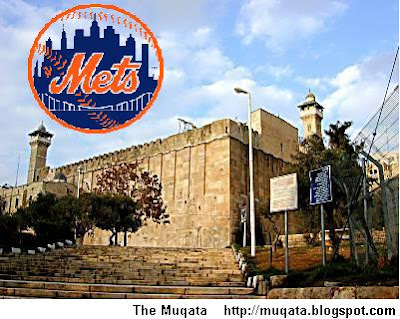 I had no clue, till getting this from a reader:

The New York Mets will allow the Hebron Fund to host its annual dinner at a club in the team's stadium despite a protest.

Eleven organizations, including Jews Against the Occupation-NYC and the American-Arab Anti-Discrimination Committee, had asked the Mets to cancel the Nov. 21 event at Caesar's Club in Citi Field.

Shlomo Mostofsky, president of the The National Council of Young Israel, praised the Mets for honoring their commitment in a letter addressed to the club's governing body.

He called the dinner a "celebration of the human spirit," according to a Young Israel news release.

"The New York Mets organization is not facilitating a political event; rather it is enabling a salute to a group of men, women, and children whose determination and inner strength have allowed them to remain in their communities, despite desperate attempts by Israel's adversaries to drive them from their homes," Mostofsky wrote in a letter to Mets CEO Fred Wilpon; his son Jeff, the team's chief operating officer; and President Saul Katz. (JPost)

Obviously, this has all of those who despise a Jewish presence in Hebron in a tizzy.

While the NY Yankees may have won the World Series (which made me happy), I tip my hat to the NY Mets for standing up to Arab, Leftist and Anarchist pressure.

As an unapologetic Cubs fan, it's hard for me to say anything nice about the Mets, but this is great. Kol Hakavod!

The Mets are an NL team, so at this dinner there won’t be a designated hitter.

Funny to have such a dinner at a place named after Ceasar.