All it takes is a 100 Shekels and a Dream 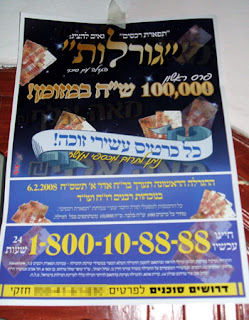 After years of not being able to play the "lotto" because the drawing was on shabbat, the entry form was based on games played on shabbat, or simply because it didn't have the right backing, the new "Goralot" chareidi lottery is taking off here in Israel.

Complete with the rabbinical backing of Rabbi Rafael Wint and Rabbi Yaakov Zonenfeld, the proceeds from this lottery go to "Tiferet Rechesim" fund, which provides aid for families in need and young charedi dropouts.

It's a far cry from a dollar to enter...its a 100 NIS investment per ticket (about 26 dollars)...though since some of the money goes to tzedaka, it justifies the high price.

The first lottery drawing is planned for Rosh Chodesh Adar (February 5th), and more drawings will take place each month with tickets costing 100 shekels (about $26). The staff of Goralot suggests that participants can buy tickets with their money set aside for charity (ma'aser). "This way, they can donate to charity as well as personally gain and keep donating from the same money they earn," explained Elisha Cohen, one of the project founders.

The haredi initiators of the project tell Ynet that the growing need for charity funds caused them to ponder how to support the public and funnel money into this organization, when there are so many others out there.

The project's founders are calling Goralot "the next big thing in the haredi community." To sell cards, ticket agents will operate in haredi population centers and, according to reports, have already sold more than 3,500 tickets. Next week, Goralot will begin advertising in haredi media and street billboards. YNET

Now...some people will have no answer whatsoever to the following old story...

"What more do you want from me?" asked G-d. "I sent you two boats and a helicopter."
You want extra money, you have to buy a ticket....(but that means only ONE ticket. It would be a shame for people to get addicted to this)

I hope what has happened in the U.S. with the lottery doesn't happen in Israel. Studies have shown that the people who buy the most lottery tickets are the people least able to afford them. 90% of the people who enter the Charedi lottery will NOT win a ticket. Which is fine if they only spent their ma'aser money on it. But if people go beyond their ma'aser money, then they're facing 90% liklihood of losing their "investment."

There is a reason a lot of people call lotteries a "stupid tax."

Fern,
Well if they spend too much, the tzedaka will bail em out ;)

I agree that they need to set a limit on ticket purchases.

100 is too much, I personaly dont mind forking the money over as purely a tzedaka matter..

But not everyone can afford it, maybe chop it to 50% and target datim..

A friend of mine once argued that if G-d really wanted you to have the money you could find the winning lottery ticket blowing in the wind outside. Therefore you wouldn't even have to buy one ticket.

I usually ignore the lottery. Rather play the market, better odds.

Am I the only one offended by the idea that buying a lottery ticket is giving tzedakah? It sounds more like a poor investment, assuming people buy wanting to win. For true giving, one can bypass the overhead costs the advertising generates.