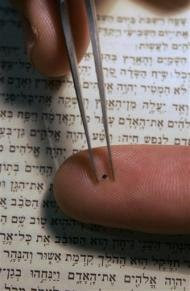 JERUSALEM (AP) — Israeli scientists have inscribed the entire Hebrew text of the Jewish Bible onto a space less than half the size of a grain of sugar.

The nanotechnology experts at the Technion institute in Haifa say the book was etched on a surface that measures less than 0.01 square inch. They chose the Jewish Bible to highlight how vast quantities of information can be stored on minimum amounts of space.

"It took us about an hour to etch the 300,000 words of the Bible onto a tiny silicon surface," Ohad Zohar, the university's scientific adviser for educational programs, told the Associated Press.

The Technion's microscopic bible was created by blasting tiny particles called gallium ions at an object that then rebounded, causing an etching affect.

"When a particle beam is directed toward a point on the surface, the gold atoms bounce off and expose the silicon layer underneath just like a hammer and chisel," Zohar said.

He said the technology will in the future be used as a way to store vast amounts of data on bio-molecules and DNA.

The tiny Bible appears to be the world's smallest.

Lots to blog...not much time though.

Do they need to put this in geniza now? What if it drops to the floor and they can't find it?

even i can do hagba with this torah