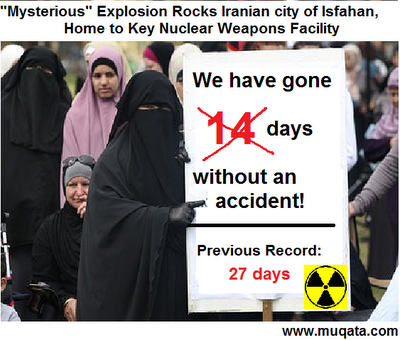 7:29 PM Update Channel 10 Israel TV reports of another huge explosion in Ishfahan -- this time in a Shahab-4 Ballistic missile facility.

Iran: Keep up the good work!

A explosion rocked the western Iranian city of Isfahan on Monday, the semi-official Fars news agency reported, adding that the blast was heard in several parts of the city.

The reported incident occurred about two weeks after Gen. Hasan Tehrani Moghaddam was killed together with 20 other Guard members Nov. 12 at a military site outside Bidganeh village, 40 kilometers southwest of Tehran. (Haaretz) 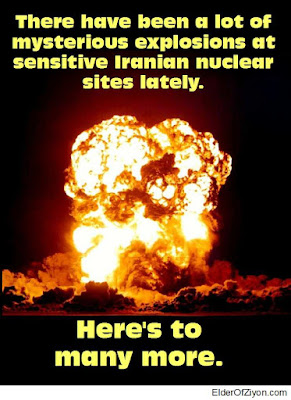 (more at Elder of Ziyon)
The Institute for Science and International Security (ISIS) updates us on nuclear facilities in Esfahan, Iran:

According to information provided to the IAEA, Iran carried out most of its experiments in uranium conversion between 1981 and 1993 at the Tehran Nuclear Research Center (TNRC) and at other facilities at Esfahan. In 1991, Iran contracted to purchase a turn-key, industrial scale conversion facility from China. This contract was eventually canceled as a result of US pressure, but Iran retained the design information and built the plant on its own. Construction of the UCF began in the late 1990s.

Iran declared that it began construction of the UCF without building and testing a pilot scale plant. After extensive analysis, the IAEA accepted this declaration.

The UCF consists of several conversion lines, including the line for the conversion of yellowcake to UF6. The annual production capacity of the UCF is 200 tonnes of uranium in the form of UF6. The UF6 iis slated for the uranium enrichment facilities at Natanz. The UCF is also able to convert yellowcake, LEU and depleted uranium into UO2 and depleted uranium metal. Iran has told the IAEA indicates that they plan to build conversion lines for the production of natural and enriched (19.7%) uranium metal for research reactors, and natural UO2 for use in the heavy water reactor. Suspicions remain that the line to produce 19.7% uranium metal was originally intended to produce HEU metal for nuclear weapons.

Fuel Fabrication Laboratory (FFL)
In 1985, Iran began operating a Fuel Fabrication Laboratory (FFL) at Esfahan that it commissioned from a foreign supplier. Iran informed the IAEA of the FFL in 1993 and provided design information in 1998. It is still in operation. According to the IAEA, the FFL is suitable for producing small amounts of fuel pellets.

Zirconium Production Plant (ZPP)
Iran has built a Zirconium Production Plant which, when completed, will be able to produce 10 tonnes of zirconium tubing per year for nucler fuel cladding. Construction started in 2004. The ZPP, according to Iranian officials, will be able to produce zirconium sponge, zirconium alloy strip and bar, magnesium, hafnium, 99.99 percent pure magnesium, zirconium alloys, titanium and titanium alloys, and can do ferrous and non-ferrous metal casting.

The IDF intelligence community on Monday commented on the explosion in a military base in Tehran two weeks ago, which killed one of Iran's missile project heads.

"The blast in the site where surface-to-surface missiles were developed can delay or bring to a complete halt the production of the missiles at that site," said head of the Directorate of Military Intelligence Research Section Department Brigadier General Itai baron at a briefing in the Knesset's Foreign Affairs and Defense Committee.

"However," Baron cautioned, "It must be emphasized that Iran has other development sites other than the one that was destroyed." (more here)

Was there some link between the 20 killed at Bidganeh and the CIA informants? Somehow I was thinking it was an intentional accident?