Hyper-modest, Hyper-Orthodox Taliban Burqa-clad Jewish women in the Mea-Shearim neighborhood of Jerusalem have raised the bar on their attempts to hide themselves when going out in public.

MyNet/Yediot Yerushalayim reports that a new trend is emerging in which the Burqa women place a cylinder on their heads beneath their burqa, to further conceal their human form. (see photo below of the Burqa woman on the left) 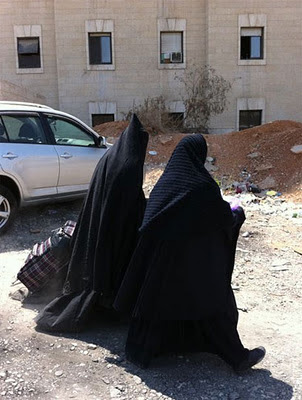 According to a source, close to the group of Burqa women, "the more stringent of the women decided that the burqa veil is not enough, because it still shows the shape of the face. The solution found is a tube that they wear over their heads under the veil so you can not identify the shape of their face."

Israel's Ultra-Orthodox rabbis and even the most stringent in the Orthodox community have came out against Burqas. "We warn the wives and daughters of Israel, that they should not be drawn into this. These customs spell doom and destruction, G-d forbid," reads the letter issued. "This is a group of women who have uprooted "Daas Torah" from Israel -- their behavior is against the Torah and is uprooting Jewish education and Torah from Israel. They are endangering the health of their offspring, as well as placing them in danger and the fear of death".

I just saw 2 women dressed like this today. From the back I thought they were some monks from the Old City, but why would they be in Mea Shearim? This is so disturbing, and so not what tzniut is about.

This is the islamification of Jews!! What has happened to Christians who live in mozlem countries too!!

Maybe they aren't really concealing anything, and their "Coneheads".
http://www.starpulse.com/Movies/Coneheads/

That picture is taken from the empty lot behind the Beis Yeshaya building of Yeshivas Mir. There were always all kinds of shady stuff happening in that empty lot (although recently it has been built up as part of Kiryat Shomrei Emunim).

Somebody please call Starwars and tell them to take back their Jawas.


Can you do a post about the rockets fired from Lebanon, I'm not finding many facts about what actually happened. Hard to separate the speculation from the reality.

I live up here near the border of Lebanon, and family is asking if I'm ok... but I have no idea what they are asking about!

Why publicize them? Aren't there any positive topics to talk about?

Why should we be surprised about this given what's happening in that area, especially when it comes to the treatment of women? Women have to sit at the back of the bus or face being beaten. Women have to walk on opposite sides of the street of men or cross the street if they see a man. Newspapers and magazines are defacing or just completely cropping out women if they're in a picture. In some neighborhoods, women aren't even allowed to drive.

With that kind of Saudi Arabia mentality, is it any wonder that there are women in this community thinking that they need to completely deface themselves and do everything in their power to be negated as a human being when they're being treated as dirt on a man's show? We will soon see "Modesty Police" in these neighborhoods just like in Saudi Arabia. We're already seeing censor "Mashgichim" from the Sikrikim community going around and committing heinous acts of violence to get people in line with their definition of Tzniut.

So seriously, is it any wonder this kind of behavior is gaining traction and getting more extreme? It's going going in line with the increasing radicalization in some sects in these areas.
-OC

Im still trying to find an issue with your logic, but it makes sense (sort of).

The only caveat is that the super majority of the Chareidi world is against the burka phenomena.

Can you please crop the picture to only show the conehead lady? The other one is just inappropriate for a frum site such as yours

I see women dressed like this in Ramat Beit Shemesh Bet all the time. What really is disturbing is the fact that there are very young girls wearing the same full burkas as their mothers.

Lol a man should go infiltrate their shul in a burke.

Then unclothe and streak out!

I think that publicity like this actually attracts more people into the fold. As opposed to the treachorous NK, the Taliban ladies in definance of virtually the entire Haredi world, are rebellious and mysterious.

I would assume that their numbers are growing.

Hmmm, just checked a lecture from Rav Mizrachi where he explains this is against halachah. It is not allowed for a Jewish woman to go around all the time with her face completely covered. Remeber Tamar when she covered her face to disguise herself as a prostitute to attract Yehudah.
As far as I know, it is usual for brides to wear a veil at the time they're lead to her groom immediately before the wedding, however it doesn't apply that they should dress like a taliban.
Not a minhag, not a "ma'uddeen", just plain ignorance on halachah and adding to G-d's Word.
R. Halevy.

The burka women are teaching us an important lesson: there is quasi-Jewish conduct in our midst that strays from being simply a different form of Jewish conduct and crosses the line out of Judaism. Our problem is that we've learned to identify this on our "left," the Reform, but not on our "right," as in the example of the burka women. Now we're seeing it, and it exists in other matters, too.

As I understand it, it is against halacha to cover the face. G-d Himself fashions our faces, and it is an insult to His magnificant handiwork.

It seems that man is always look for a way to establish his own form of righteousness, how sad. A head covering for women is quite sufficient as it has to do with a symbol of authority, that is a wife subject to her husband. This is appropriate. This photo is laughable. What measures will some go to to try to appear more pious or religious than others? Here's a concept. How about rather than trying to make the woman invisible, you get a grip on your own thoughts? Such a concept. lol