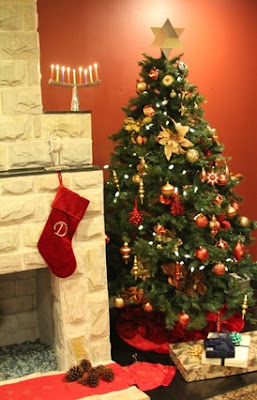 Also referred to as the Magen David (David’s Shield) or the Six Point Star, the Star of David bears various religious and cultural meanings in addition to its traditional association with Judaism. Historically, the star has been used as a symbol in Islam, Christianity and Judaism alike. Made up of two superimposed equilateral triangles, the six points of the star point in all directions, symmetry and balance. Thus, the star exemplifies an equilibrium existing within ourselves and our surrounding universe.

Whether you are looking for an ornament to top a Christmas tree, Hanukkah bush, or a tree that has a different meaning to your family, the Star of David tree topper is a perfect symbol and gift for your home or that of a loved one. (ad site)

Many proud American Jews were extremely upset by the "return home" ads that Israel has been running which targets expat Israelis. Some bloggers found the ads, "...as a whole are disgusting. They insult the intelligence of Israeli citizens, while also assailing the character of American Jews." Jeffrey Goldberg from the Atlantic stated that, "I don't think I have ever seen a demonstration of Israeli contempt for American Jews as obvious as these ads." The bottom line from Goldberg is this:

Don't imply, directly or otherwise, "that America is no place for a proper Jew, [the idea] that a Jew who is concerned about the Jewish future should live in Israel, is archaic, and also chutzpadik"

Days later, PM Netanytahu capitulated to the pressure and ordered that the ad campaign be shelved immediately.

Some intelligent thoughts on why this ad campaign is not the embodiment of Satan:

However, I'm sure that none of those who were extremely offended by Israel's message to it's expats to return home, will be offended in the slightest by the ad campaign shown above at the top of this post, now catching steam all over the USA...reported by the JPost.

Those looking to top their Christmas trees with a Jewish star can find such ornaments online, and between evangelical Christians and people in interfaith relationships, the tree toppers are selling like hot cross buns.

Morri and Marina Chowaiki have sold “thousands” of their Hanukkah Tree Toppers, a Star of David “menorahment” intended to be placed on top of a Christmas tree.

Morri Chowaiki was raised Jewish in Los Angeles, and Marina was raised in Melbourne, Australia, by a German Jewish mother and Greek Orthodox father. While Marina grew up celebrating Christmas, Morri did not. The couple decided to decorate their home for Christmas in 2005, and trimmed their Christmas tree with blue and silver decorations, including dreidels, as a tribute to both their faiths.

“She decorated a tree and put a five-pointed star on top,” Morri recalled.

“I asked with a bit of a chuckle, ‘Couldn’t you put a Jewish star on it?’ She said she couldn’t find one. I said I would, and I couldn’t. That’s how the idea was born.”

He filed for a patent for his six-sided silver Star of David and started selling it on Amazon in 2009. Since then, he says, his Hanukkah Tree Topper has become the site’s No. 1 selling tree topper, as well as its No. 1 selling Hanukka item.

The Hanukkah Tree Topper is also now sold on SkyMall, the in-flight shopping service, as well as online at Home Depot and Sears. Thousands of units have been sold in the US, Canada, the UK, Austria, Ireland, Australia and Mexico.

For some strange reason, these Xmas-tree/Chanuka-bush Mogen Dovid tree toppers aren't selling like hotcakes in Israel. I guess we're just not as enlightened.

I'm happy to keep it that way.

Yeah, I had similar thoughts... Let's see where the public outcry is on this one.
(And thanks for linking to my post!)

For some strange reason, these Xmas-tree/Chanuka-bush Mogen Dovid tree toppers aren't selling like hotcakes in Israel.

Here is one Jewish-American who wasn't offended about the ads. It seems those who complained were also those who have been forewarning the Jewish-American community for decades about assimilation themselves. As Shakespeare said..."me thinks the lady does protest too much...."

BTW Goldberg complains about everything the Israeli government does. He just can't help himself.

Lurker: What IS wrong with a Jewish Star on a Christmas tree?

Modiin encourages religious and pluralistic liberalism, which we believe is the embodiment of Modern Judaism and historic Labor Zionism.

We have many Russian olim in Modiin who are not Jewish. What better way for them to express their solidarity with Israel and the Jewish people, as well as expressing their pride in their Christian heritage, than by proudly displaying a Jewish Star atop a Christmas tree?

I will post this ad on the Modiin list and I sincerely hope to see many of these in our neighborhood this holiday season.

I thank your blog for letting us know about this impressive multicultural symbol of interfaith dialogue.

Jameel -- you left out the best part of the website's blurb:

"Looking for a unique, mixed-faith holiday card? Check out our friends at http://www.mixedblessing.com/"

Take a look at that site, there's even more stuff for American Jews to be not offended by. (Don't miss the stuff about "Chrismukkah"…)

But never mind all that. The important thing is that American Jews no longer have to be made uncomfortable by ads which make the ridiculous and offensive suggestion that for assimilated Jews in America, Hanuka can become Christmas...

Kindly note that I stayed the heck out of any and all discussions regarding this topic, on several different blogs.

Storm in a teacup. Nobody I know had even seen, or heard, of those adds.