Maybe it's time to move to Israel? 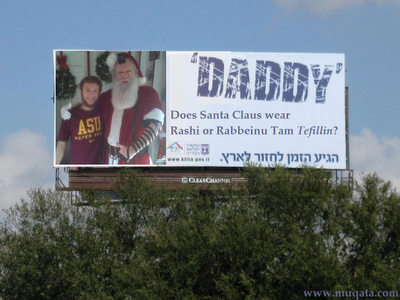 Now's the time to move to Israel...before your kids start asking questions like "What tefillin does Santa wear?"

For the story on Santa wearing tefillin...its from here

Yakov Jacobson was doing pre-Chanukah mivzoim in Laguna Beach, CA, when he happened upon a familiar character who - he was surprised to find out - is a Jew! The man had never put on tefilin before, a 'Karkafta,' and Yakov helped him do the mitzvah for the first time in his life.

One year in the mid-70's I was asked to lein parshat Miketz/Zot Chanukah (8th day) in a university Hillel minyan. I remember reluctantly cutting out of a good Friday-night Chanukah party to go back to my room to practice some more.

On Shabbat morning exactly nine turned up for davening. One of the more extroverted guys (he's now a Chabad Rabbi) said he would step out "and bring in the next Jewish face he saw."

In the next room, they were setting up a Christmas party for children of university staff. The "next Jewish face" that got dragooned into shul was in a Santa suit. He said he could spare us ten minutes for reading the Torah. He was also the only Cohen and there was no levi.

So I read one of the longest parshot at breakneck speed giving the first two aliyot to Santa Claus.

Your picture is misleading...it was photoshopped as there is no such billboard. It's a combination of the Santa Tefillin photo cropped into a picture an of Israel billboard in FLorida. Even the text is photoshopped.

Anonymous,
I suspect you're right as it is pretty clear that those tefillin are Rashi so the question is superflous.

Anonymous: I'm sorry you found the photo misleading. Its obviously photoshopped (I clearly state where the original santa photo came from below), and everyone knows that the original billboard ads were cancelled at order of PM Netanyahu, after he was criticized by Jeffrey Goldberg and other thin skinned American Jews.

It was a parody post. Sorry you didn't "get it"

Yashir koach! to Gee and Jameel