Fighting for the Soul of Beit Shemesh 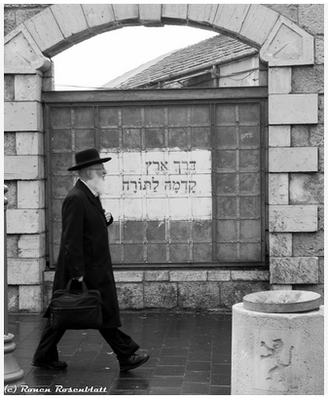 There is an ongoing war in the Beit Shemesh/Ramat Beit Shemesh municipality, as the "Sirikim" (Ultra Orthodox Chareidi Extremists) have been targeting a national-religious girls elementary school "Orot Banot" which is at the edge of a religious neighborhood and at the edge of a Chareidi neighborhood. The "sikrikim" thugs have been spitting at the school girls (1rst graders!) and calling them all sorts of names: prutzot (sluts), zonot (whores), and more. 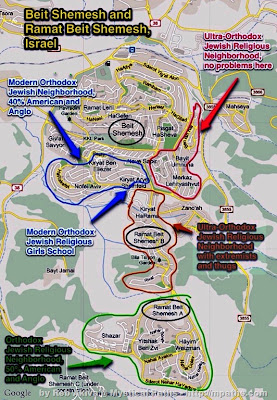 (map courtesy of Reb Akiva at MysticalPaths)
The following heartbreaking video report was broadcast last week, and has been subtitled into English by the Mom in Israel blogger. I highly suggest you find the time to watch it.
(updated video with slower subtitles)

Or, if you want an English language update (that's only 4 minutes long, here's another video update)


Tonight, there is going to be a demonstration outside the "Orot Banot" school in Beit Shemesh. While the initial organizers of the demonstration are from rights groups that I don't always see eye to eye with, I understand that many more mainstream organizations will be attending as well. I have even heard reports that moderate Chareidim plan on attending to express their outrage at the violence directed at the school children.

I will update this post a bit later with more thoughts on the issue -- and how its imperative for moderate Chareidim to vocally express their outrage at the behavior of the sikrikim.

95% of the Ramat Beit Shemesh Chareidi population are offended by the behavior of the sikrikim. Not actively expressing their disgust, no matter what the reason (the Gedolim didn't tell us to demonstrate, Chareidi politicians are taking care of it, the demonstration is too political, the demonstration will lead to Lashon Hara, etc.) are all excuses that are tantamount to "Shtika k'Hodaa" -- or silence is admission (agreement with the sikrikim).
Update on the Hafgana here.

Details: Starting at 6 PM is the big hafgana against violence and extremism. The hafgana will be on the street outside the OROT Banot girls school on Herzog Street in Beit Shemesh.

People will be going from all over the country -- be there and make a difference! Stand up and be heard and counted!

It's become pure sinas chinam, no civility here. Dov BL, your words are ringing in my ears.

Thank you for calling these pepole what they are... Sikirim, not Charedim.

Who is protecting the sikrikim against criminal penalties and retaliation, and why?

You think this only happens in Israel. As a young woman walking on 47th street in Manhattan, dressed respectfully but not like a haredi, wearing my Star of David, I was spit at by haredi men.

Jewish society has allowed these individuals great latitude over the years. When bullies learn they can get away with assault they only get worse.

Neshama, I'm uploading a version with clearer and slower subtitles. I'll send the new link to Jameel when it's ready, so check back tomorrow.

Here's an update directly from the protest, with pictures.

As the only charedi guy at the protest, the crowd was very well behaved and I never felt threatened.

Here is the new version of the video: Between the Suns (updated) Akiva, I heard that they wanted haredim to sit in a separate section in case things got hairy?

This is intolerable. So very wrong.

"Who is protecting the sikrikim against criminal penalties and retaliation, and why?"

Their gangs of about 100 people.

My son had a wonderful year at Reishit. I hope this nonsense doesn't hurt the program.
If anyone spat on my kids it would be the last time. I've raised them not to take shit.

I thought Jews should not behave as goyim. These guys are duplicating the intolerance and distortion of religion just like the fundamentalist Islamists in Afganistan. Oy vavoy to Israel if this continues.

I don't think it's the NK sikrikim.

In any case, I'm not sure if it was a good tactic or strategy to run to the secular media which obviously pounced on the chance for more anti-Haredi ammunition.

The national religious community shot itself in the foot on going public nationally. They won the battle on the school, but lost the war for sure. 'Everyone' knows that Beit Shemesh has issues with Haredim, who (religious and non-religious) would want to go live there now? In the early 2000s, a 'non-religious' neighbourhood had been planned but stopped because of legal issues and Haredi protest. Instead, new Haredi neighbourhoods are planned and Hadassh Margolese at her speech said that 'open minded' people had not been consulted.

Beit Shemesh will follow Bnei Brak and Elad and cities which had sizable national religious populations but were overrun by Haredi. I'm not saying it a bad way, it's just simple demographics, and inevitable since all this bad publicity broke out. They are lucky since the prices on homes might only have been hurt slightly, and they can always sell to Haredim.