In a rare Second Temple (Bayit Sheyni) period archeological find, Israel's Antiquities Authority announced today that a small, yet significant artifact was found as part of the City of David archeological dig. 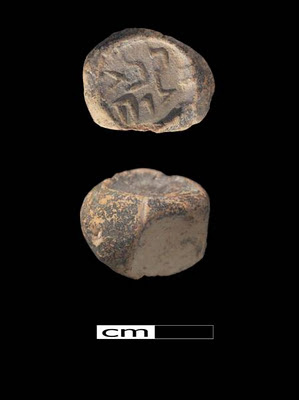 The artifact apparently served as authorization that a particular item or food was considered ritually pure for use in the Temple. The item was found underneath the Robinson Arch, 15 meters North of the Southwest corner of the Temple Mount. The item was located in the layers of dirt which covered the foundations of the Western retaining wall of the Temple Mount -- which was the primary road during the second Temple period.

The excavated dirt was carefully sifted through by 3,500 volunteers, mostly Israeli high school students in the Emek Tzurim national park. The 2 cm artifact is made from tin, with the Aramaic words on it, "-daka" and "-leh" Daka in Aramaic means "pure" and "Leh" is part of G-d's name.

According to the directors of the Antiquities Authority, archeologists Dr. Eli Shukrun, and Professor Roni Reich from Haifa University, the words mean, "Holy to God." The artifact was a type of "bag check" for items brought to the Temple, ascertaining that it was holy and could be used.

The Mishna (Oral Torah) in Shekalim, Chapter 5, uses the word "Chotam" -- or signet seal. The Mishna lists 5 different types of signet seals, and this particular one is not listed -- thereby adding an additional historical fact not detailed in the Mishna. (sources)